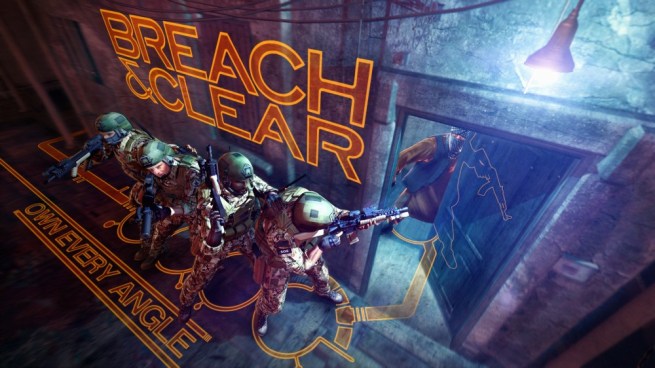 Digital terrorists better stay on alert because a new game is all about taking them out in a deadly and methodical fashion.

Breach & Clear is a tactical-strategy game for iOS and Android from Gun Media and developer Mighty Rabbit Studios. Robert Bowling, the former creative strategist at Call of Duty developer Infinity Ward, is overseeing production as executive producer on the project, which is due out this spring.

“We’ve been looking forward to announcing Breach & Clear since the day we conceived it,” Gun Media founder and creative director Wes Keltner said in a statement. “The collective mind at Gun, along with Robert Bowling’s vast experience in the console market, has combined to create what we believe is a truly unique game that will test the minds and reflexes of military strategy fans everywhere.”

Breach & Clear puts gamers in control of a team of Special Operations agents as they raid enemy bases. The gameplay emphasizes strategic planning and smart execution.

“We’re hoping to change the conversation about what denotes a mobile game,” said Bowling. “With Breach & Clear, we’ve taken the design principles of creating a major console release and transferred that to a title that just so happens to be launching on mobile devices. Our focus is to take a gameplay experience and mechanic that is built from the ground up for mobile or touch control and enhance it with the depth and progression you’d expect from a triple-A console release.”

Tactical strategy games are amid of a bit of a renaissance. Last year’s XCOM: Enemy Unknown was one of the best games of the year. Nintendo just released a new Fire Emblem, which our reviewer fell in love with. And Microsoft recently released Skulls of the Shogun, which plays an awful lot like Advance Wars.

If Breach & Clear is anything like those titles, then count me in. I never liked terrorists, anyway.