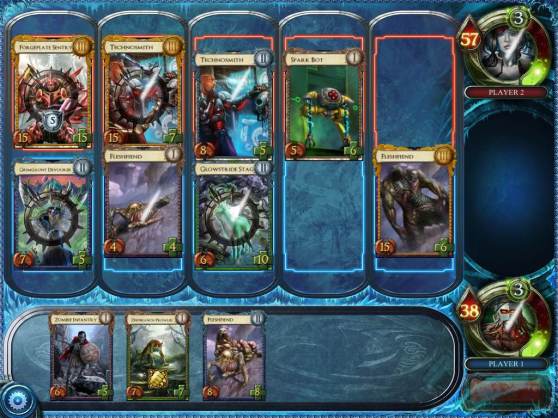 Plopping $500 down on a game meant to be played on your phone or tablet may seem, perhaps, 500 times too much. But a handful of excitable (and apparently, well-off) gamers are doing just that for SolForge. The nutty thing is, this digital-only collectible-card game (CCG) is actually free. That’s right, you don’t have to dish out any cash play it — payments are purely for optional virtual goods. Even nuttier: SolForge isn’t even out yet. It’s due late summer or early fall for iOS and PC and then later for Android.

What would get people to drop a half-grand on an otherwise free game that’s still months away from being released? If you’re nerdy enough, then the names Richard Garfield and Stone Blade Entertainment might do it. Garfield is the famous designer behind the megapopular Magic: The Gathering CCG. Stone Blade (formerly Gary Games) created the also-popular Ascension: Chronicle of the Godslayer deck-building game, whose iOS version saw 2 million play sessions in December alone. The two have joined forces to create SolForge, which started off as a Kickstarter campaign looking for $250,000 in crowdsourced funding and ended with nearly double that at $430,000.

The project is now, of course, a go, and prospective players can preorder bonuses on the official website. Stone Blade won’t say exactly how many have opted for the most expensive buy-in (that’s the $500 package), only that “many have” — and that’s not including the 81 backers who pledged $500 or more on Kickstarter.

We talked to Stone Blade founder and Ascension creator Justin Gary to find out what exactly these game designers — who are relatively new to the digital business, by the way — are doing to put gamers into “please, take my money mode.” Here are his thoughts … 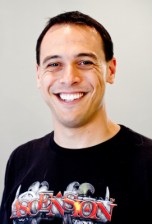 … on how he made a tabletop gaming experience work so well on iOS:

Justin Gary: It’s going to be a long time before people give up the value of sitting around a table and the tactile feel of having a deck of cards. But the fact that the iOS version lets you play it so much more easily and so much faster is great. It’s part of the designed intent: to make this game faster than any of the others that are out there.

Look at the other games in the deck-building category: Dominion, Thunderstone, or any of the others. With a typical match of Ascension, I can set it up, play it, and put it away in the same time it takes to set up one of those other games. I’m very proud of the fact that I could make Ascension playable in under 30 minutes in the physical version. When we finally converted it over to mobile, a mobile user could play it in less than five minutes.

… on whether $5 iOS sales can cannibalize $40 physical sales of the same game:

Gary: There’s a little more infrastructure required to build out the physical games, but we do make more selling a $40 game than we do a $5 download that Apple takes 30 percent of.

At the end of the day, I don’t believe it’s a cannibalistic thing. We’re able to expand the tabletop world in a way that’s never been possible before. There are hundreds of thousands of people now playing Ascension who never would have seen it otherwise. I find a lot of them actually tend to want to come over and try out the physical experience as well. We’ve seen a consistent increase in our sales of the physical game along with the sales of the mobile game.

There are people who never would have looked at a hobby game. They never played a trading-card game, never played a deck-building game, never played anything like it, and they discover Ascension on their iPhone or iPad and then get exposed to a whole new world. They don’t just buy the physical Ascension — they start looking into other games and other things in the space. It’s helping to grow the hobby that I love and that I grew up in.

… on whether digital-first SolForge can become a physical product:

Gary: While I will tell you that it is something we do have on the table, one of the design directives for SolForge was to do things with a trading-card game that you could never do in a physical space. That’s why the main mechanic of SolForge is that cards evolve and transform and get new powers and new art when you play them. Stuff can … modify cards permanently, changing the nature of the game. These are things that are really difficult to do physically.

I know this because when we were first working on SolForge, we didn’t have programming in. We had to mock everything up physically. In order to simulate leveling-up cards, we would put multiple little pieces of paper inside the card sleeve and move those out and change them. It was a pain in the butt. It would take an hour to set up and play a game as opposed to now, where it’s five minutes to play. I wouldn’t subject anybody to that exact experience.