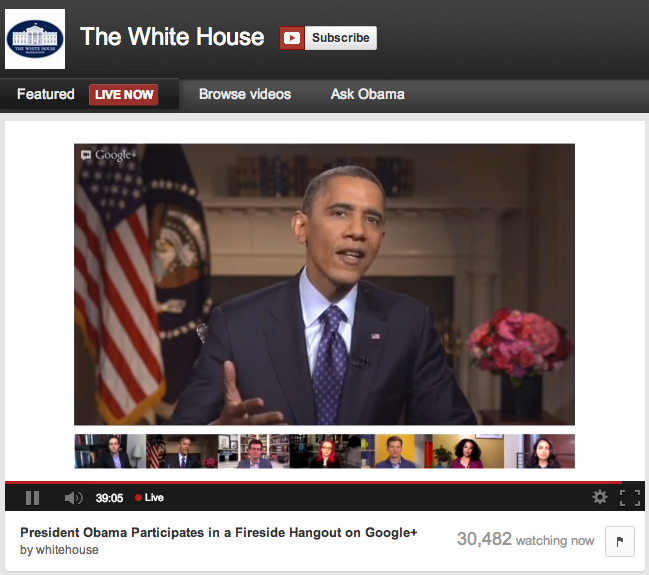 In order to ensure that America remains a hub of innovation and entrepreneurship, he emphasized the importance of education, economic, immigration, and patent reform, and said he strongly supported teaching compute programming in schools.

He even endorsed video games thanks to a recent encounter with Facebook founder Mark Zuckerberg.

“The concept of vocational education got a bad rap at some point because of the perception it was tracking folks into blue collar jobs, but all those categories have eroded,” Obama said.

Look at Mark Zuckerberg. I was sitting next to him at dinner a couple of years ago, and he said he taught himself programming primarily because he was interested in games. If we set programs in high schools that engage kids because they get it, they won’t be just sitting there slouching in back of rooms while someone is lecturing.

Given how pervasive computers and the internet is now, how integral it is in our economy, and how fascinated kids are with it, I want to make sure they actually know how to produce stuff and not simply consume stuff.

For people who already live in the U.S., education is a key factor in supporting economic growth, not to mention the startup scene. Despite high unemployment rates, technical talent is in high demand. America’s performance in math and science is mediocre at best, and women and minorities are significantly underrepresented in technical fields. Furthermore, higher education is prohibitively expensive for a large portion of the population who still need practical skill sets and income.

Another barrier to a growing tech scene is immigration law. Immigration is a hot-button issue in the technology industry as talent developers, designers, and entrepreneurs from around the world have trouble legally working in the United States. The president said that the lack of immigration reform over the past few years has more to do with the legislative, rather than the executive, branch.

“I am not the emperor of the United States. I am the president,” Obama said. “Congress has not changed the broken immigration system.”

I want immigration reform in the next four or five months. Every day we wait, there are more stories that break our hearts. We will have an economy stifled by deporting folks and a bottle-necked legal system that forces people to work illegally. It prevents us from recruiting and keeping top-flight engineers and tech people who are ready to work here or invest here. But because our legal immigration system to broken, we don’t track them. We train them here and then send them back to their countries. The opportunity for reform has never been higher.

One of the participants was a pink-haired entrepreneur who asked the president about software patents and the threat of software patent trolls. Startups have a strong need to defend themselves from copyright or intellectual piracy, but they often can’t afford to engage in legal battles. Obama said that while progress has been made on this front, patent reform is only “half way” to where it needs to go:

We want make sure patents are long enough that intellectual property is protected, without being so long that innovation is reduced. Tech is changing so fast. We want to protect privacy civil liberties and ensure the internet stays open. I am an ardent believer that what is powerful about the Internet is its openness and capacity for people to get out there and introduce new ideas with low barriers to entry, but I also want to make sure people’s intellectual property protected. We have to refine the legal process to keep up with the tech.

Obama also addressed raising the minimum wage, clean energy, and even fielded a question about why the U.S. Treasury is still minting pennies. [Why, indeed? –Ed.]

Overall, the level of intelligence and curiosity in the questions (from a small audience selected by Google, presumably) was far higher than anything seen from the press pool at a White House briefing

These hangouts are part of a weekly series in which the president answers questions from Americans, and this one follows his State of the Union speech earlier this week. Obama is a particularly tech-savvy president, and his team makes good use of social media, including Reddit and Twitter.