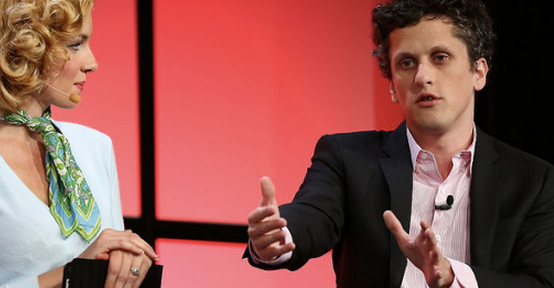 Aaron Levie, the chief executive of Box, the fast growing online file sharing company that aims to go public next year, said he’s in no race to beat competitor Dropbox to an initial public offering.

Moreover, Box is preparing to release a new feature that allows its enterprise partners to “release entirely new products” directly from within Box’s application. The product, to be announced in “about ten days,” is aimed at bolstering Box’s security and enterprise strategy, Levie said in an interview with VentureBeat. He did not provide more details.

Dropbox, a competitor to Box, is talking with bankers about preparing its own IPO, and could plan it for the second half of this year, according to rumors reported yesterday by Quartz. Earlier this week, Dropbox released some enterprise features, to help it compete with Box in the enterprise. Rumors peg Dropbox’s private valuation at about $4 billion, and Box’s at about $2 billion.

Levie said Box’s own soon-to-be-announced features aren’t designed to respond to Dropbox, but said they are “going to create energy in this category.” He continued: “We are only speeding up our velocity in this area. We’re going to see a lot of stuff.”

Box also competes with companies like Microsoft, Google and Egnyte, all targeting the enterprise with online file storage and sharing products.

“You have to focus your energies”

Levie said he’s comfortable with Box’s differentiation from Dropbox, which is the company most often compared with Box. While they are listed as competitors, and their names even sound alike, they are often used simultaneously by employees at big companies, Levie said.

And there are big differences between the two. Dropbox’s strength and focus has been in ease of use, and user interface, in part because of it early traction with consumers. By contrast, Box has chosen to target the enterprise, and therefore has developed richer features in areas such as security (user authentication, for example) and integration (with other enterprise apps).

“You have to focus your energies somewhere, and you tend to put your focus on where your strength is,” Levie said.

Box knows that it needs to keep its user interface simple to keep customers happy, Levie acknowledged. But Box has more settings, because of its enterprise focus, which can pose challenges. Levie said he’s working hard here, and has doubled his design team in the last three months. He did not specify exactly how big the team is, but said it is relatively small — easily below 100 — because even the impact of a few very talented designers is significant.

Box recently just raised another $150M, at a rumored valuation of $2 billion, as it expands into international markets this year. Levie said he isn’t too concerned yet about profitability, because the goal is to grab market share. The relatively virgin market is vast and growing quickly — and it’s important to grab now, he said. Economies of scale are significant: It’s much more efficient, Levie said, for 500 engineers to build technology for 100,000 customers than for 10,000 customers.

When asked if he can keep up last year’s growth rate at 150 percent, he said he thinks Box “will more than double this year, and we would like to do that again the year after. We’re still in a double compounding growth period.”

After Box expands this year to major international markets, it will expand into emerging markets the following year. Then Box will focus on expanding into “different kinds of verticals” the year after that, Levie said.

It’s been a heady year for the colorful Levie, who loves to wear orange shoes, and is often holding a cup of coffee, even though his high energy levels suggest he doesn’t need any.

He’s making his first appearance on the Charlie Rose show this evening.

The gloves have come off recently between Dropbox and Box, as the two companies try to distinguish themselves. Box has raised slightly more money ($284M, compared to Dropbox’s $257M) and has spent considerably more time and money at marketing.

However, Dropbox has recently started speaking up too. In November, the company’s vice president Sujay Jaswa told the audience at our CloudBeat event that Dropox had a bigger clientele, even among enterprise customers, than Box.

Dropbox has customers at 95 percent of the Fortune 500, said Jaswa, and that’s higher than the 92 percent number Box has quoted in recent months. Moreoever, Jaswa said that Dropbox usage is 200 times larger than Box, citing data from Palo Alto Networks, which tracks the actual bandwidth of files being stored behind firewalls at 1,636 corporate networks (see slide).

However, Box’s Levie said such data figures don’t reflect the true distribution and value of their respective services. Dropbox has a lot of customers who share photos, videos and other personal media, and they often do so without explicit permission from their employers, Levie said.

“Dropbox’s model is very consumer focused,” Levie said. “It tends to see consumers using tools at home and at work. The volume and scale is very different.”

Box, by contrast, shows up being used behind a firewall only after it is approved by an IT manager — and data stored by its application is not as data-intensive as the rich media files shared by Dropbox users, he said.

In Box’s case, users are more collaborative, Levie said. Every member of a company’s sales team may use Box to share marketing collateral, for example. By contrast, Dropbox customers often use storage primarily to synchronize their media between all of their devices. Levie said the gap between box and Dropbox in data usage is unlikely to close over time.

Palo Alto Networks spokesman Mike Haro agreed that the amount of data being shared by an app doesn’t provide any real gauge of how it is actually being used.

Traffic by DropBox users is now 54 times larger than Box, Haro said, citing a new report to be released by Palo Alto Networks next week. That report is based on patterns from among the company’s 3,000 customers.

Haro said it was important to keep in mind, however, that Box doesn’t have a consumer version, and consumer services tend to drive far more traffic. He used the case of MegaUpload to explain. That company, which was ruled illegal because of copyright infringement by its customers, most of them consumers, was at least 20 times larger than that of the next biggest application that Palo Alto Networks tracked at the time, according to Haro.

Levie said the economics around enterprise are also better. Large companies are willing to pay more for a service with security and other enterprise features than consumers are. “The enterprise market is where the largest and most viable business remains,” he said.

Levie said the release by Dropbox of new enterprise features this week was expected, but nothing surprising.

“It’s baseline functionality you need in order to go in and compete in the business market,” he said. “That said, there’s quite a bit of distance from what we’ve built from what they’re building.

He said Box can handle enterprise companies that have 10,000 to 50,000 employees using Box in the cloud. “This requires a lot of features. You have to build them, manage them, and you need data and visibility of what employees are doing with that content at scale.” He added that you also have to support an ecosystem of other partners that need to tie into your application.

And this is just the beginning. “We’ve only done a blip of what we want to do,” Levie said.