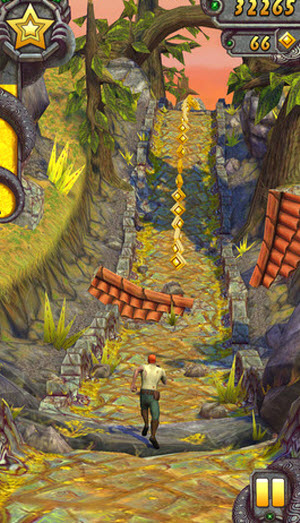 Takahashi: Eric, you used to write algorithms in a trading company. How much of this is a science? How much will analytics tell you, so that you can take action very quickly as a marketer?

Seufert: My approach to user acquisition probably comes from a different angle than the way most people do it, most studios. I’m only one guy on the team, and there’s no way we can keep on top of daily reports from every number, to see how many users we get or what kind of quality is there. What I try to do is focus on what I call the downpay market. If I’m trying to optimize user acquisition costs, all I’m doing is reducing expenses. There’s a limit to how much I can reduce those expenses.

But if I focus on increasing the value of those users, practically I have a limit as well. But the idea is that I can increase the value of a user much more easily, with much less work, through analytics when I have a small staff. What we try to do is focus on the proper limitation of freemium. Making sure that freemium economics work well. We focus on attention, and we focus on engagement. If we do that, we have models which can predict how much users will be worth. Then user acquisition is very simple because all you have to do is bid less than that and make money on that spread.

You can take the opposite approach if you have a large team. It’s very rewarding if you can study every single day — this quality of users came from wherever. Then you can adjust your spending to those channels. My belief is that since all those channels basically tap into the same pool of users, it doesn’t provide as much value.

Bielau: What do you think about outsourcing user acquisition as a competence? Using a service provider to manage those campaigns for you. You mentioned one problem being the lack of resources. Do you think there is room for a service provider like Fiksu to manage campaigns for you and charge 10 or 20 percent? Is that something that, as a free-to-play game provider, you should even consider, or is that giving away one of the key things you should be doing yourself?

Seufert: Yeah. Another one of the key things you should be doing, which is very large, is managing the channels. What you should be doing is managing the freemium implementation of your game, to maximize the lifetime value. I can easily foresee a small developer not wanting to invest so much money and having a strong analytic system already. But if you didn’t have that, I can see it making a lot of sense to outsource that to another company to run it.

Takahashi: Pulling back a little bit, this trend of big companies moving into the market and buying as much of the market as they can is a pattern that’s going to continue. Big brands are coming into mobile. Should that be scary to all the developers out there because they have infinite budgets for user acquisition and don’t even care if they’re losing money on a per-user basis?

Bielau: Are you referring to our Japanese overlords? [Laughter]

Takahashi: Some of them. But even someone like Disney. Maybe they get so much benefit out of the value of their brands — which is a form of non-paid user acquisition — that they can spend far more than they do on mobile user acquisition. How do you compete against that?

Laakkonen: Well, I think that’s an overplayed hand. One of the biggest publishers in the world is Activision, and they just started. Looking at Disney, mobile has been really interesting for them because it’s bigger than you would expect. I think the big players are actually leaving a lot of money on the table. In the end, spending more than you make is not a strategy unless you’re playing for an exit. If you’re in a situation where you can lift a company and sell it rapidly, that’s a strategy.

But we haven’t yet seen what happened on Facebook. Zynga paid a great amount of money to buy themselves domination of the marketplace and create this cross-promotion network that ensured their leadership for these two-and-a-half years. We have not seen that happen on mobile. Unless someone creates a similar constructive cross-promotion network that dwarfs any others, I don’t see companies regularly spending more than they can make. They’ll just count their money down. Those users will move onto other apps. They’re throwing their money away.

Bielau: Maybe in addition to that, we’ll see big players who have their own app store or their own mobile classic network. People like Best Buy or Wal-Mart are undertaking some projects and learning how to monetize from mobile developers and mobile advertising. On top of that, all the device manufacturers, the hardware companies, are beginning to offer distribution services and preinstallations. Eventually that’ll be available on platforms or in markets that we haven’t seen being fully monetized or even offered yet. Outspending is one way to do it, but in the long term, I think the indies will find their distribution channels in order to make acquisition affordable.

Takahashi: One thing that holds some of the big guys back, too, is that there are aggressive marketing tactics that they can’t engage in. They have to protect their brand, and they don’t want to be caught in that trap where they’re seen as exploiting consumers. When it comes to aggressive marketing, where is the line for acquiring new users?

Laakkonen: The line is where the customer says, “What the hell is this?” I think Apple has the right idea on this. They look at an app and say, “Is this good for the consumer?” If it is, it should fly. If it’s not, it shouldn’t. It’s like porn. I know it when I see it. Some of them that we saw start running high-risk marketing like incentivized downloads or bot farms and that kind of stuff are already killed. I think we’re moving beyond that. So there’s always some loopholes. My approach to anybody thinking about those would be, “Life’s too short to play with that crap. You don’t want to do that.”

Christoffersen: I would add to that I don’t think any of these gimmicks have been proven to work. I don’t think they’ve been proven to provide a return on investment. Even incentivized downloads, the returns are so small. The monetization rate is so small. If you spend money that way, you might end up with more users for less, but those users don’t stick around, and they don’t spend any money. At the end of the day, you have to bite the bullet and pay the price for a quality user. It makes more sense to focus on the game being good and implementing freemium properly.

Takahashi: I think some what we’ve done so far is scare everybody about user acquisition costs, but at least we’ve got their attention. What can be done for the little guy? Gilad, this may be a good time for you to weigh in with your explanation of revenue sharing.

Rotem: First of all, you need user acquisition. You have to do user acquisition, as I see it. You can’t count on getting featured in the App Store or the Marketplace. What I’m advocating is to stop paying cost per install — or paying an ad company for getting a user to install an app — and start working with whatever network, whatever channel you choose to work with. I feel that the industry is going to a more performance-based model, where we form a partnership between the traffic provider and the developer. There’s revenue sharing and cost per action [where the user does an action that proves the user is more loyal than one who simply installs it] — paying for actual paying users — or revenue sharing, dividing the revenue between the two.

Takahashi: How would you guys react to that?

Christofferson: There are so many different channels out there. There’s companies like Chartboost, offering the opportunity to do direct deals from one developer to another developer, exchanging clicks, to do cross-promotion. Also, supply is growing every day. There are so many new devices being activated every single day. This is to everyone’s advantage. Also, my advice would be to take advantage of seasonal dips. We see before Christmas — this happens every year — that prices keep going up. Everyone wants to get their game out there before the Christmas sales. You see a lot of developers trying to reach a higher ranking before the App Store freezes, or just gets prolonged, anyway.