New York City Mayor Bloomberg describes himself as an “entrepreneur” first and foremost on Twitter, so it’s no surprise that he’s launching a new initiative to support local tech startups.

Dubbed “We are made in NY,” the program includes a new website to highlight the city’s resources for entrepreneurs, including subsidized office space and grants as well as job listings at 900 local startups. New Yorkers should expect to see a series of digital ads on subways and buses to highlight the campaign.

“Growing our local tech industry is an important part of our economic development strategy to bring new businesses to our city and more jobs opportunities to New Yorkers,” said Bloomberg in a statement. The mayor’s office recruited the city’s chief digital officer Rachel Haot and media and entertainment commissioner Katherine Olivia to lead the initiative.

Considering a career change? The site includes an extensive list of tech companies in New York — and many of them are hiring. Kickstarter, Etsy, ZocDoc and many other high-profile startups are based in the Big Apple. 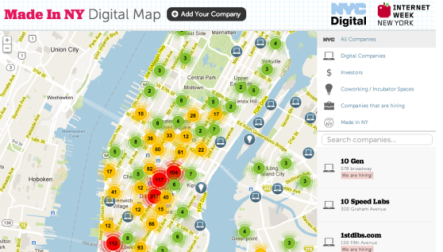 Local entrepreneur Matthew Hogan said the initiative evokes a “strong sense of pride in the NYC startup community.” Hogan is the founder of an early-stage startup called DataCoup; he said resources like these are a life-saver for entrepreneurs living in a fast-paced and expensive city like New York. “The sense of camaraderie is heightened when we recognize others that are fighting as hard as ourselves.”

According to Bloomberg Ventures’ Matt Turck, the initiative demonstrates that the administration “truly gets it” and is “driven by a mayor who’s himself an an extraordinarily successful tech entrepreneur.” He added that the city is now well on its way to “reinventing itself as major tech hub.”

Turck, who recently spoke with VentureBeat about the shortage of data scientists, said he hopes the ad campaign will build the public’s confidence in tech startups — a career path that is “at least as desirable as a job on Wall Street.”

Reddit cofounder Alexis Ohanian is one of many well-known tech entrepreneurs that have lent their support to the campaign. He said in a statement that he’s “thrilled be part of a vibrant industry that has not only been hiring New Yorkers, but hiring them to help change the world.”

For more info, check out the promo video below.