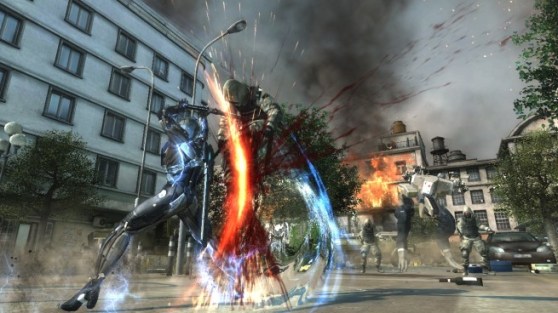 Though Metal Gear Rising: Revengeance is as deep and fluid as any Platinum Games release, it doesn’t have much in the way of tips and tricks. Once you learn the Zandatsu move, which is very early on, you can essentially run through Revengeance easily, restoring your health and energy so you can perform another Zandatsu right away. It has a bit more to it than this, obviously, but when in doubt: Zandatsu.

However, I discovered a trick that anyone can use to purchase Raiden’s suit upgrades and unlock all of his special moves in the first stage.

You can do this at any location with a Holochip, but the one in the video below — from File R-01, the first stage after the prologue — has a Large (L) Holochip worth 5,000 BP. Simply grab the Holochip (you don’t even have to wait for the BP counter to catch up) and enter the Customization Menu. Now quit Customization and return to the game and you’ll be back at the start of your last checkpoint, permitting you to grab the Holochip again and again.

Note that completing stages nets you around 3,000 to 5,000 BP depending on your rating, but by doing this, you can amass over a 100,000 BP in mere minutes. Then just buy all the upgrades and special abilities that you want. More moves and upgrades unlock throughout Revengeance, so make sure to get a fortune in BP before continuing if you don’t want to worry about not being able to afford something later.

I hope this helps some of you, and I personally didn’t feel like this took away from my enjoyment of Revengeance. Raiden’s supposed to be the ultimate badass cyborg anyway, right?