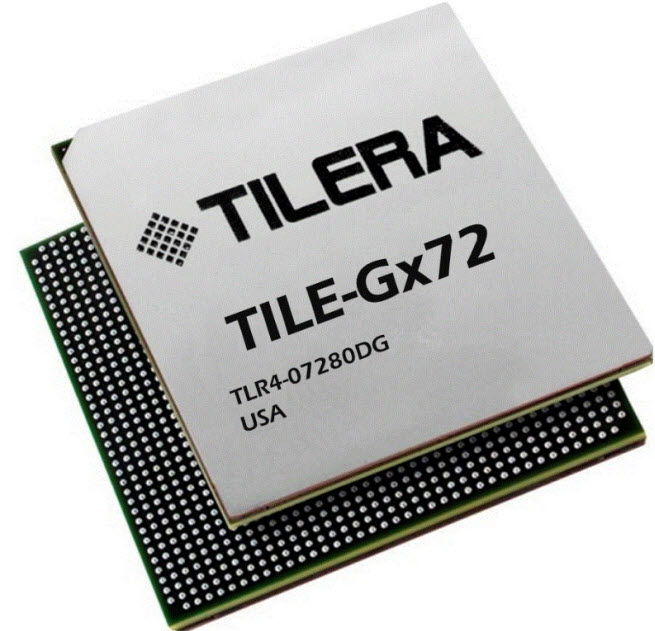 Tilera, which specializes in making chips with a lot of brains, has announced its highest-performance low-power processor with 72 processing cores. 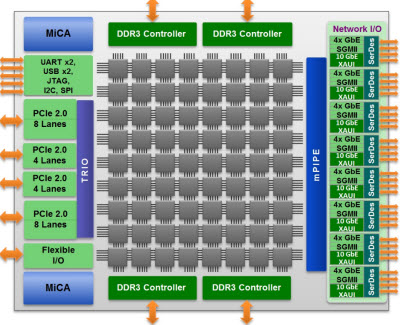 The TILE-Gx72 is the company’s highest-efficiency many-core processor, with 72 64-bit cores that can transfer data at a rate of 100 gigabits per second.

The chip runs Linux and is targeted at next-generation network, multimedia, and cloud infrastructure. That means it resides inside computers used in big data centers.

San Jose, Calif.-based Tilera plans to show the chip off at the RSA Security Conference in San Francisco from Feb. 25 to March 1. The chip is available in samples now, but it’s not clear when it will ship in commercial volumes.

Tilera’s customers are building “intelligent infrastructure” to deal with the explosion of real-time data and video processing on the web. It’s getting more and more complex to handle tasks such as serving video at high speeds to a variety of people who want it simultaneously.

Tilera argues that its software-based model can be more easily adapted to standards-based programming tools, which are always in flux. The new chip comes a year after the company launched its TILE-Gx36 processor.

“The TILE-Gx72 rounds out our processor portfolio, complementing our 9, 16, and 36-core TILE-Gx processors, and is offering a remarkable range of processing performance,” said Devesh Garg, the president and chief executive officer of Tilera. “Customers demand ever-increasing levels of performance and performance-per-watt to stay competitive, and they simultaneously want to reuse their software and hardware investments across their product portfolio. The TILE-Gx72 brings an unprecedented amount of compute to customer designs and leverages the thousands of open-source libraries and the growing Linux ecosystem.”

The TILE-Gx72 is targeted at computing and input-output intensive applications such as networking and firewall appliances, software-defined networks, network monitoring and analytics, Layer 7 deep packet inspection, streaming video servers, and big data transaction processing at over 4 million transactions per second.

“Tilera is raising the bar again with the launch of its flagship TILE-Gx72 processor,” said Linley Gwennap, the principal analyst of the Linley Group. “As the first 64-bit, many-core processor to run standard SMP Linux across 72 cores on a single chip and capable of 100Gbps networking, the TILE-Gx72 will enable customers to achieve new levels of performance in multimedia and networking applications.”