SAN FRANCISCO, Calif. —  Just days before Highlight announced its biggest update yet, I became a believer.

Highlight is a location-based mobile app that notifies you when people in your social network are nearby. I was skeptical of the app engineering “serendipity” until it led to an impromptu dinner party in Tahoe over the weekend.

Today during a small event at Highlight’s offices, founder and CEO Paul Davidon demoed the new features and set out his vision for the future of communication. Highlight 1.5 pulls in elements like photo-sharing, commenting, and events from other social apps, but it still takes its own serendipity-centric approach. 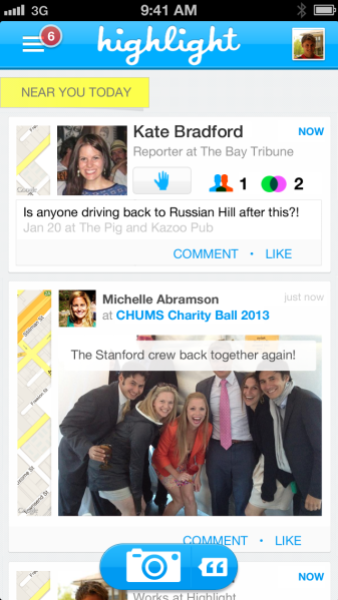 “How can you take people walking around cities and connect them in the physical world?” said Davison during his presentation. “Taken together, the photos and events features are really complimentary. The applications extend to conferences, fashion week, weddings, football games, company holiday parties, small group dinners, concerts. There are so many situations where we gather together as friends, people, part of community. Being able to see who else is there, and have real-time conversations, and have that memory of that after you leave, will create a richer experience.”

The app now has a photo icon, and you can use it to post photos and share them publicly with people in your vicinity. Davison gave the example of Fat Tuesday, when he snapped a picture of the donuts he brought to the office and watched friends and coworkers filter in for the treats.

“We want to allow people to share an experience they are having right now,” Davison said. “It’s not photo sharing in the typical sense, it’s photos plus physical space. If I am walking down the street and see something interesting, or I am standing near someone else’s photo physically, it will show up on my phone.”

The vision is that rather than emailing photos or organizing them into an album on Facebook, people will simply have access to photo albums simply by being in a particular place. The caption feature encourages communication between users, and Davison said this element is more popular than he initially expected.

Events are the other major update. Highlight events, however, do not have an official organizer or an invite list, and these are only visible to people in the immediate vicinity.

“We didn’t want to re-create services that already exist,” Davison said. “We want to create something that allows people to create shared experiences that are lightweight and fun.

“You can only start an event ‘here and now.’ You enter a title and it defaults to the current location, but that can be altered. Only people near you will get a notification.”

When Highlight went through its first update, it made the application “smarter” and more interactive. The team spent the past year rebuilding the notification backend and infrastructure to make the notifications more relevant. They also worked on extending the battery life, since the app runs in the background on phones and can be a power-drain and introduced a search function.

Davison said that these changes helped Highlight grow its user base and receive Apple’s Best of 2012.

Highlight launched in January 2012 and quickly became popular within the tech scene. It took off at the South-by-South-West conference as startup kids used it to network, meet new people, and track down their friends. Davison formerly worked as an entrepreneur-in-residence at Benchmark Capital, which invested in Highlight along with SV Angel, Crunchfund, and other angel investors last March.