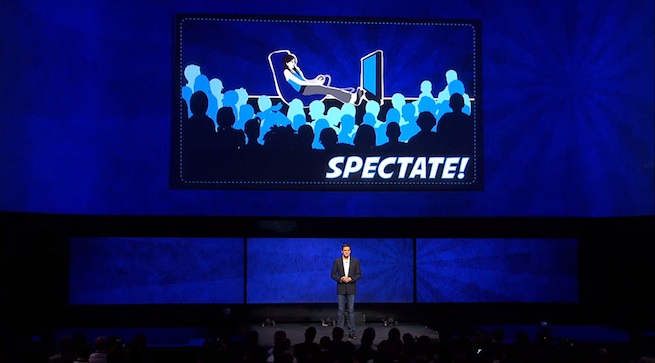 Sony’s acquisition of cloud gaming company Gaikai is now a major component of the new PlayStation console — and the new online scheme also carries a big goal: to make every PlayStation 4 game playable on the Vita.

Perry declared that it’s the “fastest gaming network in the world.” Players can instantly stream videos of their games with the new controller (dubbed the DualShock 4) and it’s “Share” button — it’s partnering with streaming video site Ustream for this feature. You can control who you broadcast your game to. Friends watching your video can post comments or even help you out by taking over the controller itself and guiding you via your online connection.

The new PlayStation Store also uses this streaming tech. You can instantly try a game for free without any time-consuming downloads (Sony didn’t specify how long you could play each “demo” in this trial). You can share it with your friends as well. The goal of this, Sony maintains, is to help you buy only the games that you truly love.

Perry then described how the PS Cloud will power a more refined Remote Play functionality with the PlayStation Vita portable. Basically, at the touch of a button, gamers can instantly switch from the PlayStation 4 to the Vita without interruption. Sony demonstrated this on stage with Knack, its first announced PlayStation 4 game, and this action title appeared to run smoothly on the Vita.

“Say you’re in the middle of an epic battle on PS4, but your kids are taking over the living room … just transfer the game over to your PS Vita,” said Perry.

Perry promised to elaborate further on the PlayStation Cloud in the future, which might even include backward compatibility with PlayStation 3 games. He mentioned that the PS Cloud will hopefully encompass “past, present, and future games.”