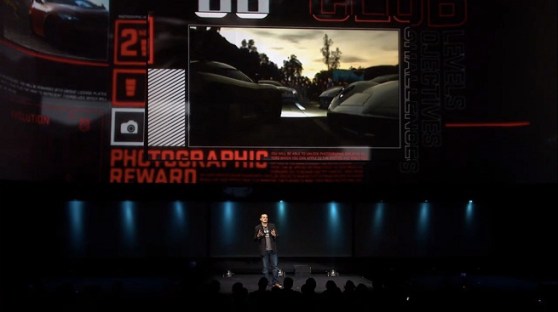 Sony’s Evolution Studios revealed today it is working on a new social driving game called Drive Club for the PlayStation 4.

Matt Southern, the head of the studio that made the MotorStorm PlayStation 3 games, announced Drive Club at Sony’s PlayStation Meeting in New York. He said his studio came up with the idea 10 years ago and waited for the hardware that could do it justice. The kind of networking technology to do a game like this couldn’t be done, Southern implied, until the PS 4.

Drive Club introduces the idea of social driving, where you can form a club of drivers that you play with on a regular basis, much as you do in joining a clan for a first-person shooter like Call of Duty: Black Ops II.

In Drive Club, you create your car, drive it on tracks, and post your scores. But you can also create a challenge, where you pick the track, the time of day, the weather, and other driving conditions. Then you issue the challenge and ask your friends to race on the track. They can play it asynchronously, on different timetables, or live.

“You can drive in real clubs, asynchronously or in real time against other clubs all around the world,” he said. “Watch the drama unfold as others try to meet my challenge,” whether 1-on-1 or in tournaments with thousands of players.

The technology to pull this off, with high-fidelity graphics that make the racing experience as close to real life as possible, means that “we’ve gone borderline insane,” Southern said.