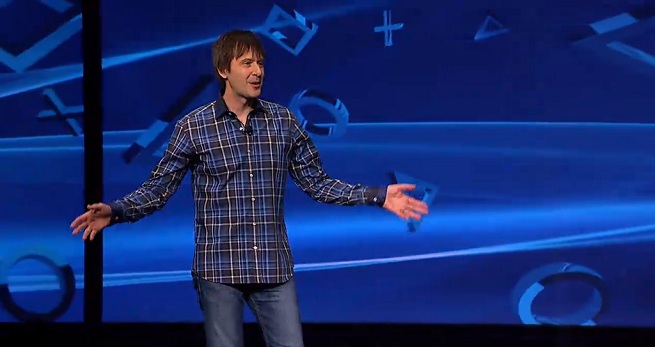 Sony unveiled the PlayStation 4 today at an event in New York. The new machine will be extremely powerful, building upon a foundation of PC technology rather than the legacy of the PlayStation 3.

Sony didn’t explicitly release details about the PS4’s capabilities, but it disclosed plenty of information that gives technologists something to discuss. After all, modern-day game consoles pack the technology of recent supercomputers into an affordable and attractive box for the living room. As such, they are among the highest technological achievements that engineers can create. We’ve pinged Kevin Krewell, a longtime chip analyst at the Linley Group, for his reaction.

Advanced Micro Devices is most likely the provider of the processor. [Update: Sony confirmed this in its subsequent press release]. Sony didn’t say so, but it referred to an “accelerated processing unit,” which is AMD’s terminology for a chip that combines a microprocessor and graphics processing on a single piece of silicon. As two-chips-in-one, it’s more economical for a game console.

“This is an AMD chip with Radeon graphics,” Krewell said.

Sony’s Mark Cerny, (pictured above), the system architect for the PlayStation 4, said that the machine will have a local hard disk drive, 8GB of main memory (using the GDDR5 flavor from fast PCs), an enhanced PC GPU, and 64-bit x86 processing. Again, AMD fits the bill for all of that. Sony called it a “custom processor,” meaning it combined AMD’s cores in a unique way.

The advantage of using PC technology — a move that matches that made by Microsoft with the original Xbox — is that Sony can take advantage of all of the volume economics of the PC industry to lower the costs of its machine. The drawback, however, is that Sony may have a harder time distinguishing the performance of its machine from high-end gaming PCs at some point in the PS4’s life cycle.

The machine uses its GPU for particle physics processing, which indicates GPU Compute, Krewell said. That likely means it will support OpenCL computing, or using the graphics cores to do nongraphics tasks. The specs in fact say that the GPU has 18 compute units that collectively produce 1.84 teraflops of computing power. Combined with the CPU, the computing power tops 2 teraflops.

[Update:  Anand Shimpi of Anandtech mentioned in a post that high-end PCs that cost a couple of thousand dollars can already do more than this kind of graphics performance, but the graphics are much better than the PS 3’s.]

Krewell also said that the 176GB/s of memory bandwidth is 3.7 times the bandwidth of the Cell processor (made by IBM for the PlayStation 3, with Rambus XDR main memory) and the Nvidia RSX (GDDR3) graphics chip memory bandwidth combined. The 8GB of GDDR5 memory is 16 times the memory of the PS3.

The system will have an optical disc reader that can read 6X Blu-ray and 8X DVD discs. That means it can get data off those discs faster than the original, slower Blu-ray and DVD drives of the past.

The machine has several options for video output, including analog, HDMI, and digital optical. It has universal serial bus (USB 3.0) input-output. It has standard Ethernet and Bluetooth 2.1.

Sony didn’t give any other speeds and feeds, so it’s hard to estimate clock speeds and which AMD processor and graphics cores are in it, Krewell said.

[Update: Shimpi said that Sony referenced dedicated video encode and decode technology that allows a player to instantaneously record and share screenshots and video of your gameplay. This may be the same hardware that allows the PS 4 to function as a game server and stream gameplay to a PlayStation Vita].

Sony will use the cloud gaming technology from Gaikai to run “past, present, and future” PlayStation titles, according to Gaikai chief executive David Perry, whose company Sony acquired last year for $380 million. This likely means that Gaikai cloud gaming power playing older PS3 titles on the PS4 through cloud-based infrastructure. That obviates the need to put backward-compatibility hardware in the PS4, cutting its overall costs.

Cerny acknowledged that the “radical technology” of the past Cell processor got in the way of simplicity for game developers. So the new machine is making the leap to PC technology, which can easily run engines such as Epic Games’ Unreal Engine 4. Sony showed a demo of Unreal Engine 4, reportedly running in real time on the PS4.

“It’s very comparable to a mid- to high-end gaming PC,” Krewell said. “Even though the CPU is combined with the GPU on one die, like most PC processors today, the higher bandwidth memory and custom design indicates it should have graphics performance more like a discrete GPU found in a gaming PC.”

Cerny mentioned that the CPU has eight cores and a state-of-the-art GPU,with a combined two teraflops of computational performance. He showed the Havok physics engine running on the PS4 while consuming very little of the system’s overall computing power.

With the current generation of consoles, Microsoft came out first in 2005 at $300 and $400, while Sony and Nintendo followed in the fall of 2006. Sony’s machine packed so much technology in it, including a state-of-the-art Blu-ray player, that it cost $500 and $600 at the outset. But Microsoft used one of the same core designs that Sony did. The three-core Xbox 360 processor proved a match in terms of the visuals it could deliver compared to the PlayStation 3, and Microsoft made improvements along the way.

Both Microsoft and Sony used the traditional console chip strategy. They developed high-end chips using some of the very best — but also  cost-friendly — chip designs available. They sold their initial hardware at a loss and then reaped the benefits in terms of software revenues — the “razor and razor blade” model.

Over time, they rode the cost curve down. Every year, they redesigned the system boards and other components with the goal of cost reduction in mind. And every couple of years, they switched to a more advanced manufacturing process. This curve, of course, comes from the continuous innovation of the semiconductor industry that has been codified as Moore’s Law, which holds that the number of transistors on a chip doubles every two years. Chip makers did this by shrinking the width between circuits. With shorter circuits, electrical signals could move from one part of the chip to another faster. The power consumed declined, and since the distance between circuits was smaller, chips could be made smaller and still perform the same functions as earlier generation chips. Since the chips were smaller, they consumed less material, the yield (or ratio of functioning chips out of the total made) improved, and the costs went down.

In the case of console chips, the system makers reduced the cost while maintaining the same level of performance. They could reduce the cost of making the consoles dramatically every couple of years, and over the course of six or seven years, they have been able to bring the prices down.

But Nintendo’s Wii turned the technology race in a new direction, unexpectedly adding motion-sensing controls with a remote control-like controller. It cost only $250, and Nintendo claimed from the outset that it wasn’t selling the hardware at a loss. Nintendo used older chip processes and started out with much lower costs. It now sells a Wii for $130. That enabled it to reach a much wider mass market.

Yet Nintendo’s console ran out of steam before its rivals did. While the graphics of PS3 and Xbox 360 games raced ahead, the cartoon graphics of the Wii made it seem like a poor substitute. For the past couple of years, the Xbox 360 has sold more units than the Wii, erasing some of Nintendo’s previous overwhelming lead in this generation.

Microsoft’s fortunes turned around as it continuously upgraded its software-driven Xbox Live service, and then it introduced the motion-sensing Kinect add-on system, which enabled the console to recognize gestures and voice commands. The Xbox 360 had just enough horsepower to pull off Kinect — something the Wii clearly couldn’t do with its aging technology.

This time around, Nintendo’s low-cost strategy may have failed. The new Wii U ($300 to $350) upgraded the experience from the old Wii to match what the PS3 and Xbox 360 could do, and it enabled Nintendo games to use high-definition graphics. But the Wii U isn’t even outselling the Xbox 360, and Nintendo has shaved back its estimates for sales ending March 31 to 4 million, down from 5.5 million earlier. Nintendo evidently didn’t make enough of a technological leap, even though it tried to incorporate the tablet phenomenon into its new game system.

Meanwhile, all three of the console makers are being buffeted by competition from Apple and Google-based smartphones and tablets.