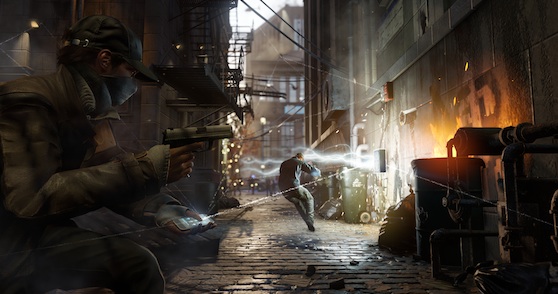 Ubisoft never met a video game console it didn’t like. After all, it is making eight games for the Nintendo Wii U, which is sinking pretty hard right now. But the French game publisher announced today that it will take its much-anticipated video game Watch Dogs to the just-announced PlayStation 4.

Yves Guillemot, the chief executive of Ubisoft, said on stage at Sony’s unveiling of the PlayStation 4 today in New York that Ubisoft has multiple development teams at work on new titles. These games will be “more connected, more immersive, and more interactive.”

“We are creating games that can be played anywhere, anytime, across many different devices,” Guillemot said. He suggested that Watch Dogs is going to be that kind of game, as Ubisoft mentioned at last year’s E3, where it showed a version of the game on the Apple iPad. But Ubisoft hasn’t shown all that much of Watch Dogs’ gameplay until today. The title’s presence on the PS4 is sure to please more than a few fans who have followed the game since last year’s preview.

Late Wednesday, Ubsisoft announced that the open-world-adventure game Watch Dogs is coming to the PlayStation 3, Nintendo’s Wii U, the PC, and the Xbox 360 — though the publisher made no mention of a next-gen Microsoft console. At last year’s E3, Watch Dogs won 83 awards from various game critics.

He talked about the theme of Watch Dogs, where you can take control of “smart cities,” a future scenario where advanced camera, monitoring, and networking technology enables you to control every aspect of life in a city. And you can do this for good or evil. 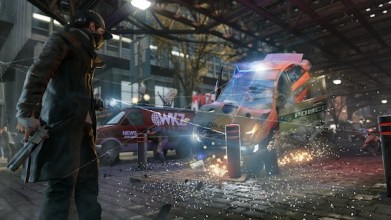 The video showed the masked protagonist, the vigilante Aiden Pearce, (pictured above) as he passed by people in the streets of Chicago. As he goes by a homeless man, an icon appears over his head and describes him as “Marcus Rhodes, Iraq war veteran.” (Pictured right). Pearce has used his smartphone to hack into the “central operating system” for Chicago, giving him omnipotent powers to control the city.

Ubisoft says, “Aiden will be able to tap into the city’s omnipresent security cameras, download personal information to locate a target, control systems such as traffic lights or public transportation to stop a chase, and more. The city of Chicago is now the ultimate weapon.”

So, of course, he hacks an ATM machine.

He witnesses a criminal robbing a woman and springs into action. He pursues the criminal, and you can see the location of the thief on the minimap on the lower right corner. It shows that the main character is aware of the criminal’s movements at all times thanks to the city’s ubiquitous monitoring technology. He chases the criminal down, and a sign eventually appears, saying, “Criminal neutralized.”

He has a shootout with the police and escapes by hacking a train and then jumping on top of it..