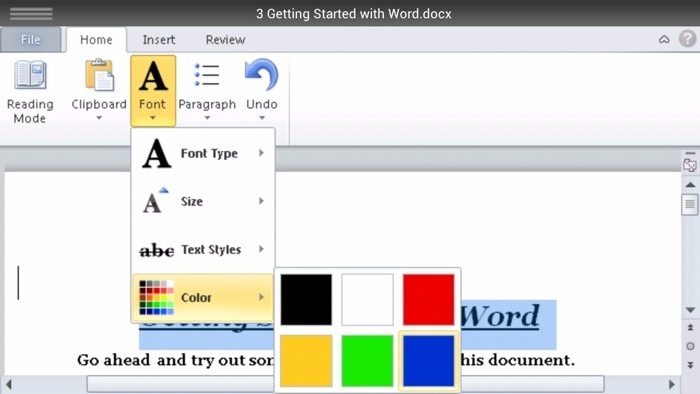 After successfully bringing Microsoft Office to the iPad, iPhone, and Android tablets, CloudOn is today announcing support for Android phones with version 4.0 of its app.

CloudOn also revealed that its free apps have been downloaded more than 3.5 million times. It runs virtualized versions of popular Microsoft Office apps, including Word, PowerPoint, and Excel.

It streams the apps from CloudOn’s servers — so they require an Internet connection, but you won’t have to worry about snagging a Microsoft Office license. CloudOn also integrates with cloud storage providers DropBox, Box, Microsoft Skydrive, and Google Drive. It also offers CloudOn Filespace, an environment for collaborating on documents.

CloudOn’s Android app is similar to its iPhone app, except for a few differences between iOS and Android app design. The Android app features a redesigned Office Ribbon that’s easier to use on a small phone screen. So far, the Android app supports phones from Samsung and Google’s Nexus line.

“Android Market [now Google Play] is generally very fragmented, we’ve taken an approach to cover 75 percent of the market, with an eventual goal of ubiquity,” said Jay Zaveri, CloudOn’s vice president of product, in an interview with VentureBeat.

Palo Ato, Calif.-based CloudOn has raised more than $33 million in funding, most recently in a $16 million second round in June. Investors include The Social+Capital Partnership, Translink Capital, Foundation Capital, and Rembrandt Venture Partners.