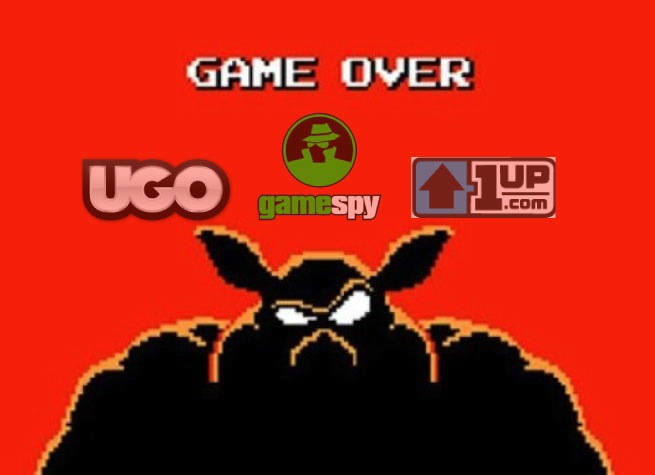 Publishing company Ziff Davis is shutting down iconic gaming news sites UGO, 1UP, and GameSpy, according to a memo sent to employees by CEO Vivek Shah today.

Ziff Davis is a publishing company that’s known for a rich history of tech publications (and some would say purchasing high-profile news organizations and eventually allowing them to decay over time into a shell of their former selves). And now that Ziff owns former rival gaming news site IGN, it’s opted to go the quick and easy route by killing off the aforementioned news sites (which were part of the IGN purchase).

[Super obvious but ethically necessary disclosure: VentureBeat’s GamesBeat channel is a direct competitor with IGN as well as soon-to-be dead sites UGO, 1UP, and GameSpy.]

The company justified its acts so it could focus on its two core brands, IGN and AskMen, each of which will now have their own separate advertising departments, according to the memo. Ziff will also stop representing advertising for third-party sites like FamilyGuy.com and GameStop.com. Additionally, Ziff is “actively engaged with parties interested in acquiring” its IPL gaming league, but it still plans to broadcast video coverage of e-sports events via IGN.

The sad thing about Ziff’s decision to kill off these sites is that lots of people will now likely be looking for work just when the industry is plotting a brand new round of the console wars.

IGN responded to VentureBeat’s request for comment with the following statement: “We are focusing on our two flagships, IGN and AskMen. Unfortunately, as a result, we have decided to close sites and restructure our teams accordingly.”

Polygon was able to obtain the internal memo from Shah, which we’ve pasted below:

Today, we took some difficult but important actions that will ensure the continued growth and health of IGN and AskMen. Before I go into more details about the changes, you should know that they resulted in the elimination of jobs at IGN. It’s always upsetting to say goodbye to colleagues and let’s do what we can to help these employees as they seek new opportunities.

It’s also important for you to know that we are absolutely confident that we now have the best structure and team to successfully move the company forward and that there are no further planned reductions.

The changes we made today are designed to allow us to Simplify and Focus. Our goal is to do fewer things and to do them exceptionally well. In that vein, we want to direct all of our energy and work behind our two flagship brands: IGN and AskMen. They are both category killers and share a vision of a multi-screen (PCs, tablets, smartphones, TV) and multi-format (text, photos and video) world.

As a result of our decision to focus on our core brands, we are:

On the IGN front, Peer Schneider will continue to oversee all of editorial and product, focusing those resources exclusively on IGN. The foundation of this entire company is its content and we will continue to have the best people in the industry producing it.

Charlie Barrett will oversee the monetization of IGN everywhere in the U.S. – PCs, tablets, smartphones, YouTube, consoles – and now be able to concentrate the sales and ad ops teams’ efforts where they can make the most impact.

Frank Puma will assume an exciting new role as executive director of programs and solutions, reporting to Charlie. The sales development, design and creative teams will report to Frank, whose charge is to deliver world-class advertising experiences.

A new head of engineering and technology for IGN will be recruited as quickly as possible. Tech has a monumental role to play in the growth of IGN and will be committed to working hand-in-glove with edit, product and sales.

On the AskMen front, Ric Poupada will continue to oversee all aspects of the AskMen organization and is excited to have a new VP of sales, Paul Chenier, reporting to him. Paul has been a longtime advocate of the AskMen brand and is one of the most talented sales executives in our organization. Having him build a dedicated AskMen ad sales team will do wonders for the business.

Ian Chambers will continue to run International out of the UK for both IGN and AskMen and we’re thrilled with the performance of our businesses overseas.

Mike Etheridge will be the VP of finance and operations for IGN and AskMen, working across all of the departments to ensure that we’re growing our business, expanding our margins and making metric-based decisions.

Rachelle Igoe will be the head of human resources for IGN and AskMen, ensuring that we continue to nurture, attract and retain the best talent in the industry.

I’m sure that there will be a number of questions in the days and weeks ahead but please know that we will be a better functioning and nimbler organization from this moment forward.