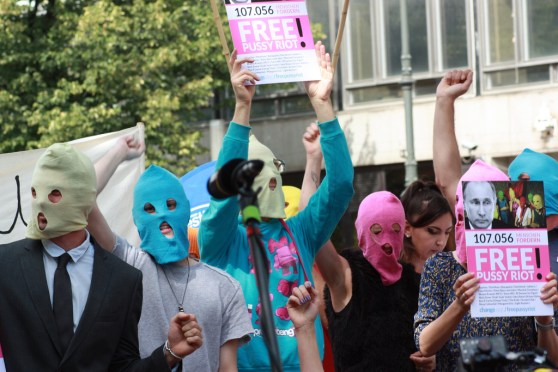 Exactly one year ago, four members of the Russian female punk band Pussy Riot charged the gilded altar of Moscow’s Cathedral of Christ the Savior. Outfitted in bright-colored balaclavas and tights, they pumped their fists in the air and shouted, “Saint Mary! Virgin! Drive Putin away!”

Months later, three of the women were prosecuted at a trial, in which they were denied permission to call witnesses and ask questions. All were found guilty, and two are still serving terms of hard labor at prison camps.

This episode set off a wave of global outrage, with even the sober-minded German Chancellor Angela Merkel speaking out on behalf of the rockers. Many saw it as another depressing, even outrageous, confirmation of how repressive and intolerant Vladimir Putin’s regime has become.

The Pussy Riot trial’s true importance, however, transcends Russia’s struggles over free speech and the right to protest. It symbolizes the greatest single obstacle to economic growth in Russia: the government’s crushing of the innovative spirit that is the essential prerequisite to entrepreneurship.

Steve Jobs is the most iconic example. From the first personal computer to the iPod, the iPhone and the iPad, he propelled technology, and thereby humanity, forward through imagination. “This wasn’t about processor speed or memory,” Jobs once said about building Apple. “It was about creativity.” And Apple inspired millions across the world, from Brazil to China, who are launching startups at record pace.

The Pussy Riot episode, however, points to why the majority of Russian entrepreneurs face breakdowns rather than breakthroughs.

Entrepreneurs depend on an environment that encourages — or at least permits — experimentation and rebellion against established paradigms. Russia’s leader, determined to suppress opposition and convinced that oil and gas revenues will sustain the country’s economy forever, has been unable or unwilling to grasp this truth.

It could be stated starkly: no Pussy Riot, no Steve Jobs.

Entrepreneurs in Russia find their government not only unhelpful, but also actively hostile. Russia’s security and law enforcement, the siloviki, have earned a reputation less for protecting and more for extorting bribes and using the courts to incarcerate those deemed threatening the regime. Private sector patrons connected to the Kremlin use the government to intimidate competitors.

Business Solidarity, a local advocacy organization that campaigns for entrepreneurial protections and rights, estimates that one in six Russian entrepreneurs is in jail. The BBC reported that Russia has imprisoned nearly 3 million entrepreneurs over the past 10 years. Almost no other social group has been persecuted on such a large scale. Subjected to a malicious bureaucracy enveloped in graft and nepotism, most Russian entrepreneurs leave. Those that stay register their companies and raise capital offshore.

In 2010, then-president Dmitri Medvedev announced plans to build Skolkovo, a multi-billion-dollar high-tech center modeled after Silicon Valley, in a suburb outside Moscow.  Work is well advanced.  According to the Skolkovo Foundation the government has spent nearly $4 billion on a 1,000-acre campus dotted with sleek modern buildings, research labs, and schools–including one affiliated with the Massachusetts Institute of Technology.

Kaita Gaika, a deputy director at the Skolkovo Foundation, told me that the center’s purpose is to “induce more people to become entrepreneurs and help existing startups skip the dead valley of projects (failure) … Skolkovo entrepreneurs have better protections.” Perhaps the only protections.

Russians who have been victims of their government’s corrupt heavy hand, however, are wary.

“The siloviki, Russian police, will take your property away from you,” one told me during a visit to Moscow in November. “The judge always supports the siloviki. When somebody goes before a judge, it is 99 percent clear that he will be found guilty and sentenced to years in jail. It is a normal situation.”

“You should be fearless to be an entrepreneur anywhere,” Russian angel investor Arkady Moreynis told me when I visited him at the Moscow satellite of startup incubator Plug and Play. “If you’re an entrepreneur you have to live with what you have.”

What happens, however, if you live in a system that is, as Pussy Riot member Nadezhda Tolokonnikova pointed out at the end of her band’s trial, “dominated by rigidity, closedness, and caste?”

You don’t produce the iPad, as one Russian entrepreneur told me.

“It is not possible for us to have innovation.”