Samsung will unveil its Galaxy S IV, the most hyped-up Android smartphone of the year, in just a few weeks.

Samsung mobile chief JK Shin confirmed today that the Galaxy S IV will debut in New York City on March 14, Reuters reports (based on an earlier report from the Korean site Edaily). This confirms a rumor we heard last week marking the same date and location.

“We introduced the Galaxy S III in London last year, and this time we changed the venue (to New York) … as we were bombarded with requests from U.S. mobile carriers to unveil the Galaxy S IV in the country,” Samsung’s mobile head Shin said today at Mobile World Congress, according to a quote from Edaily.

Samsung originally introduced its flagship Galaxy S smartphones at a New York City event in 2010, so it’s nice to see the next model make its first appearance here as well.

Expect more features like the creepy “Smart Stay” eye-tracking in the Galaxy S IV instead of a focus on specifications, according to the most recent rumors. The phone’s design may also be reminiscent of Samsung’s Galaxy Note 8.0 tablet, which features a simpler and more elegant design than Samsung’s most recent tablets. Samsung can’t really go much beyond the Galaxy III’s 4.8-inch screen without approaching Galaxy Note territory, though some rumors are hinting that the IV’s screen may creep up to 5 inches.

We’ll be at the Galaxy S IV unveiling in a few weeks, so check back for more!

Update: Samsung just sent out invites to the evening event, which will take place at Radio City Music Hall. 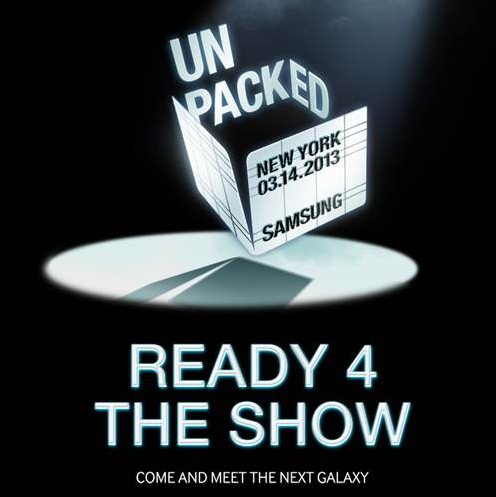