Nearly three in five adult Americans (58 percent) believe that video games contribute to violent behaviors in teenagers, according to a Harris Poll survey that interviewed 2,278 U.S. adults. Additionally, 38 percent said that they know nothing about the Electronic Software Rating Board’s (ESRB) system for labeling the maturity level of games. Yet 33 percent of the adults surveyed let their children play whatever they want.

“The findings underscore the lack of awareness Americans have about the video game rating system, as well as the confusion in the market,” Harris Poll president Mike de Vere said in a statement. “They also factor into a larger discussion playing out across our country and on a political stage around how violent games impact our youth, with President Obama recently announcing his desire to look into ways to fund research examining the impact of violent video games on children.”

The Harris Poll ran this survey independently. No outside corporations or interests funded or requested the research.

While more than a third don’t understand the rating system, 66 percent of households with game-playing children use the ESRB’s age guidelines to help make purchasing decisions. Only 14 percent of Americans claimed to fully understand said guidelines while 18 percent said they understood a lot of it.

Nearly half of those surveyed (47 percent) are not at all confident in the ability for the ESRB ratings to keep mature games out of the reach of kids. Only 32 percent are confident that the game ratings can do so. Americans have more faith in the movie (49 percent) and TV (39 percent) ratings systems. 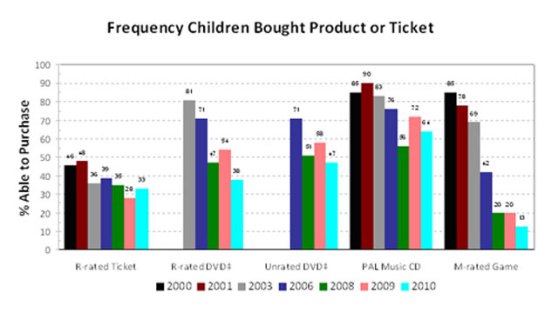 Of course, that concern doesn’t actually correlate with reality. The Federal Trade Commission’s (FTC) own studies consistently reveal that the games industry is the better at enforcing its age-rating system than movies and music.

That is a significantly higher enforcement rate than even R-rated movie tickets, which allowed one out of every three underage moviegoer to see a potentially violent film.

That’s not to say that young gamers can’t get their hands on violent games. Clearly they can as this study reveals that parents are willing to buy the games for their children, which is no fault of the industry.

Harris Poll will release the full results of the survey on Wednesday.