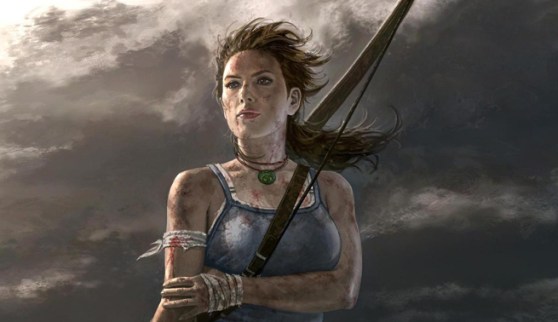 No. And it’s not torture porn, either, despite the controversy Tomb Raider (releasing March 5 for Xbox 360, PlayStation 3, and PC) generated by including threats of rape in its early demo reels. I can confirm that developer Crystal Dynamics chopped out two of the greasier moments I played last summer at the Electronic Entertainment Expo and excised any other hints of sexual assault from the rest of the game. If you still want it to offend, take heart. Regular assault is never in short supply. In the process, we see an innocent, talented, untested archeologist become Lara Croft, and the path we take to that end easily makes this Tomb Raider the grittiest, bloodiest, most brutal entry in the series’ 16-year history.

It’s also easily one of the best. Assuming you’re not too much of a traditionalist. 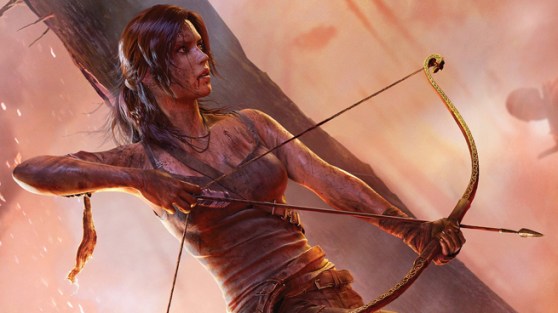 You’re trapped on the island from Lost!

Tomb Raider’s been reimagined enough times — Crystal Dynamics first did it back in 2006 — to win a Mortal Kombat Re-Re-Retconned award, but this Lara Croft rings true. She’s fresh out of college, eager to prove herself, full of the self-doubt that comes with inexperience, and leading her first expedition to find the mythical Japanese kingdom of Yamatai. She finds it when a freak storm maroons her on the island from Lost.

I’m not kidding. A mysterious force kills anyone attempting to leave (or arrive, for that matter), and Lara’s best friend is quickly abducted by the Solarii, a hyper-violent cult not unlike the Others. And like Lost, the Solarii aren’t the island’s most dangerous inhabitants.

Those problems encourage Ms. Croft to do very dangerous things that she really doesn’t want to do, structured as linear missions in an open, beautifully designed world. The island is a fantastic mix of lush jungle and rusted-out industrialism, decorated with enough human skulls to suggest the entire Japanese army died here. Better still, unlike most action-platformers, it feels like a hostile environment where injury is commonplace — Lara gets banged up early and often — and not an obvious, video-gamey playground tailor-made for your climbing entertainment. That said, I never felt lost or coddled … not an easy balance to pull off. Visual cues benefit from smart, subtle integration, and “survivor instinct” lights up your path if you need the crutch.

Likewise, the direction impressed me simply by framing in-game shots with thought and care. Caves feel claustrophobic. Reveals have scope. Even something as mechanical as Lara climbing a ladder takes on a cinematic quality, as does Lara herself. She’s hesitant to creep past murderous cultists and climb a 200-foot radio tower in high winds, but after being hunted like an animal, suffering terrible injuries, losing friends, and killing someone for the first time, it’s such a pure, joyous moment of triumph when she actually does it.

Moments like that set this Tomb Raider apart. They made me eager to explore the island even more, and they gave me a heroine I could genuinely root for.

So a’raiding you will go!

Let’s take a random, 20-minute sampling of my playthrough: Lara got captured, escaped through a grisly mountain of body parts and viscera, discovered a new weapon, used it to gun down a horde of Solarii, evaded one of the island’s more insanely deadly natives, solved a destructive, wind-based puzzle, and then barreled through a gauntlet of shockingly frail wood buildings over a bottomless gorge as they disintegrated around her.

If you loved solving the old-school puzzles … well, sorry. It doesn’t skimp on platforming and zip-lining excitement, but Tomb Raider puts the emphasis almost entirely on action. The good news is it pulls off that action very, very well. Combat feels a bit clunky at first — understandable, since Lara’s never used a weapon in anger — but a satisfying, strategic version of Uncharted’s high-pressure gunfights soon clicks into place. The stealth/cover system is nothing short of elegant. If danger’s close, Lara acts like it, hunching over so she’s de facto behind cover when you move against some. It’s also refreshing to feel pressured by an enemy A.I. that doesn’t do anything overtly stupid and constantly flushed me from cover with explosives.

Every gun in your pack comes in handy, but I fell in love with Tomb Raider’s signature weapon: Lara’s bow. It’s the first thing that gives her a sense of power, opening up the option for stealth-killing enemies at will. I cheerfully used it to clear scores of Solarii without raising the alarm, and I used it even more after amping up the arrows with fire, then napalm, then explosives. 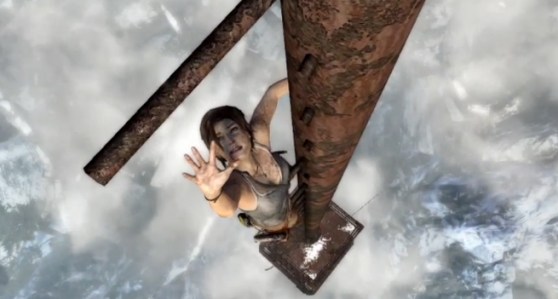 And you become Lara Croft!

Initially, Lara doesn’t even have a credible melee attack. By Tomb Raider’s end, she’s kneecapping giants and daring an army of ancient samurai warriors to bring it while cradling a grenade-launching assault rifle.

Her evolution happens at a steady clip, and new, exciting challenges flow from one to the next with a terrific sense of momentum. Credit also goes to an upgrade system for Lara — based on earning experience points — and her gear — bought with “salvage” collected from crates, animals, and enemies — that feels vital. Two sets of higher-tier abilities unlock once you drop enough points into scrounging Survivor, fighting Brawler, and stalking Hunter categories, making it a slow burn that accelerates nicely. I really felt the changes, and my tactics often shifted based on my new skills. Tomb Raider also regularly introduces cool, new equipment like a climbing ax and rope arrows that open new areas. Or you can just yank enemies off ledges, which never gets old.

Everything comes together when the game drops you into harrowing, breakneck sequences where Lara careens through river rapids or leaps from zipline to zipline, and a single miss equals a gruesome death. Then it stops showing you the quick-time-event prompts because you just don’t need them anymore, and that’s when I finally felt like Lara Goddamn Croft, handling the situation because that’s what we do best.

Of course, one late-game miniboss becomes borderline-impossible to defeat without the right upgrades, and a thorough player can earn every skill, making those categories redundant. And unfortunately, those aren’t Tomb Raider’s only mistakes.