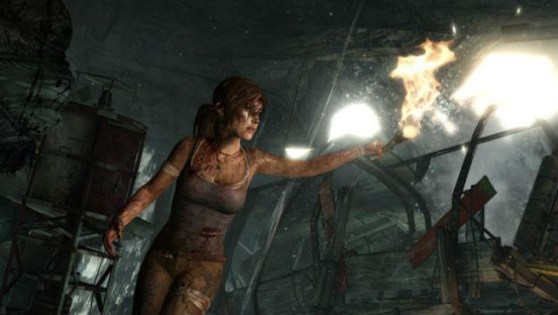 Tomb Raider constantly builds toward its end-goal, but it peaks way too early with an exhilarating crescendo in the Solarii stronghold. Lara infiltrates, annihilates, and escapes in a pitch-perfect carnival ride … and then it’s back to more enemy-free scavenging … and more rescuing … and more traversal.

The fun doesn’t suddenly drop out, but the energy does, and Tomb Raider never really gets it back. It just keeps going for another five hours, unaware that I’ve already played a pretty amazing finale. Not even a well-earned bit of fan service can help the final confrontation measure up, and I’d argue that the finale even features the wrong villain.

Tomb Raider fires off these kinds of misstep a few times. It opens with Lara almost instantly drowning inside a ship that something’s cut in half without ever cluing you in to basics like what, who, how, where, or why. The island becomes pretty dull if you continue after finishing the campaign. You get some puzzles along the critical path, but Tomb Raider reserves most of its brain teasers — and a tease is about all you get — for optional tombs hidden around the island. Those all depends more on your reflexes than your intelligence. They also offer mandatory backtracking once you’ve completed them. On the plus side, Tomb Raider does have tombs — not a claim every game in the franchise can make. 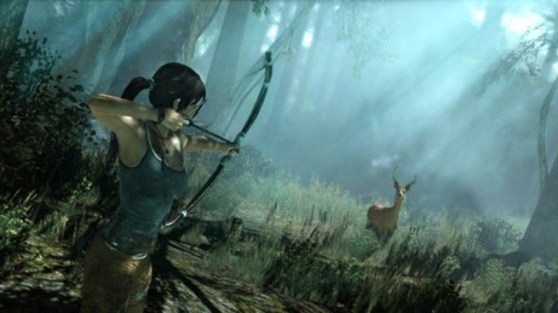 So is the tone

The opening hours are undeniably harsh, but any sense of personal danger to Lara quickly fades as she becomes more confident, more capable, and much better armed. That’s still no excuse for letting the menace dip. And those optional tombs? Completely danger-free. Why?

Unsavory as it sounds, I wish those subtle threats of rape had stayed in the game. Far Cry 3 had them — directed at a male character — without anyone raising a fuss; I think we as an audience could’ve handled it here. Tomb Raider needed that edge of darkness to carry it through to the end, giving Lara a tangible source of fear to overcome. As-is, her transformation from terrified waif to destroyer of worlds feels subtle to the point of afterthought. We never really get a definitive moment where Lara stands up, asserts herself, and draws the line against those who threaten her. That should’ve been the centerpiece moment of this story, and it’s entirely absent. 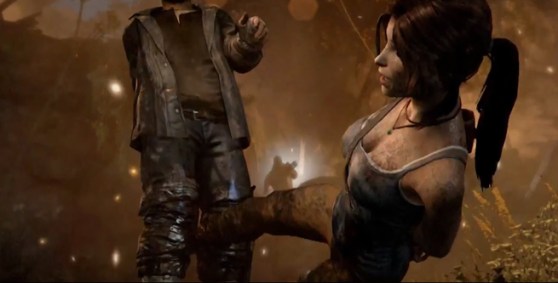 The code never tanks like it does in, say, Tomb Raider: Angel of Darkness or even the more recent Aliens: Colonial Marines, but you still get a fair amount of frame-rate stutters, limbs clipping through objects, cameras obscuring your view, missing items (like Lara’s bow) during a cutscene, and at least one prerendered fire that burned Lara from 3 feet away.

But the worst, most distracting glitch? That’s Lara’s signature ponytail. I’m astonished by how poorly it animates. It’s a zero-gravity, physics-defying creature someone superglued to the back of her head, and it is desperate to escape. Nitpicky? Not really. It’s ever-present in the game and the flaky star of every single cutscene. Go into the character extras and you’ll see it bouncing drunkenly on Lara’s otherwise static 3D model. The rest of Lara moves beautifully throughout the game, from her expression to her body language, so I have to believe this Medusa thing operates in exactly the way Crystal Dynamics intended. That alone completely justifies my calling it out. 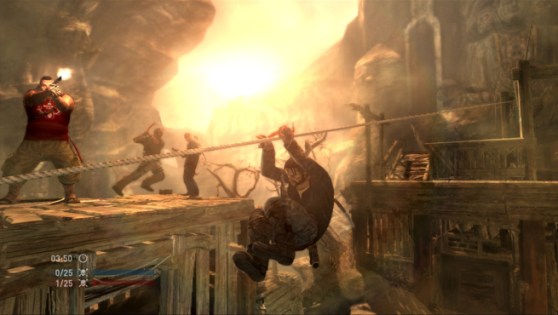 And the multiplayer is disposable

Here’s what happens when you subtract the cool parts from Uncharted 3’s multiplayer and prank its button map.

Tomb Raider’s first bite at player-versus-player is inoffensive at best and pock-marked with iffy choices at worst, good for a look but not an extended stay. It does throw in a few nice touches; players spawn in unreachable bases to avoid spawn camping, and “setback” rewards give you a wee armor/damage/speed boost if you’re eating it during a match. But little imagination went into the different modes and the weapons feel unfriendly to use. It took me a while to figure out whether the assault rifles are too chattery or if frame-rate stutters sometimes make it tough to aim. Spoiler: It’s both.

Upgrading helps, but you pay separately for the different factions’ loadouts. Unlocked gear doesn’t carry over. Unlocked perks do, including “Spite,” a hysterical (if cheap) option to explode like a bomb on death. You can end up with a buffed Survivor and a baseline Scavenger, putting your hard-won advantages completely at the mercy of random chance. Or else you spread out your purchases and stay weaker across the board for longer.

Of its four modes — which also include team deathmatch, free-for-all, and supply-scrounging Rescue — Cry for Help performs best. Survivors race to secure three radio beacons before Scavengers chalk up 20 kills and collect the batteries these no-longer-Survivors drop. It’s a nice mix of control-point objectives with a bit of Call of Duty-ish “Kill Confirmed” thrown in, and it balances better than expected. At least, until poor design sabotages it. Some of those unreachable bases make nice overwatch positions across the entire map. I handily nabbed the top score by sticking to my spawn point, sniping at the opposition, and collecting my own dropped battery when they zeroed me. Big, obvious exploits like this suggests a lack of forethought and/or beta testing. Tsk. 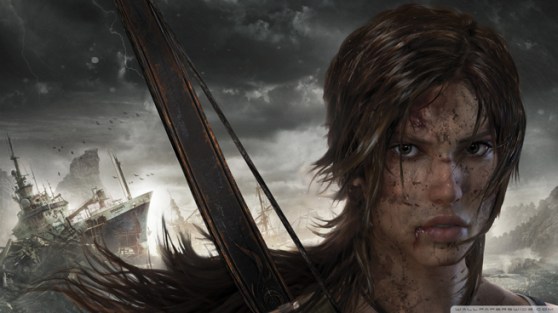 Tomb Raider doesn’t screw around. It’s brutal and beautiful, anchored by a born-again Lara Croft who finally doesn’t look or act like an empty pin-up doll … or an exploitation victim, despite what you might have heard from uninformed sources. This is a lady caught up in an adventure much bigger she is, and it’s a real pleasure to experience her growing to fit it. A number of minor gaffes, an uninspired multiplayer, and a severe drop in tension defuse Tomb Raider somewhat, but nothing stops it from living up to Lara’s legacy.

I’m ready for the encore.

Tomb Raider releases March 5 for PC, Xbox 360, and PlayStation 3. The publisher provided GamesBeat with a retail Xbox 360 copy of the game for the purposes of this review.