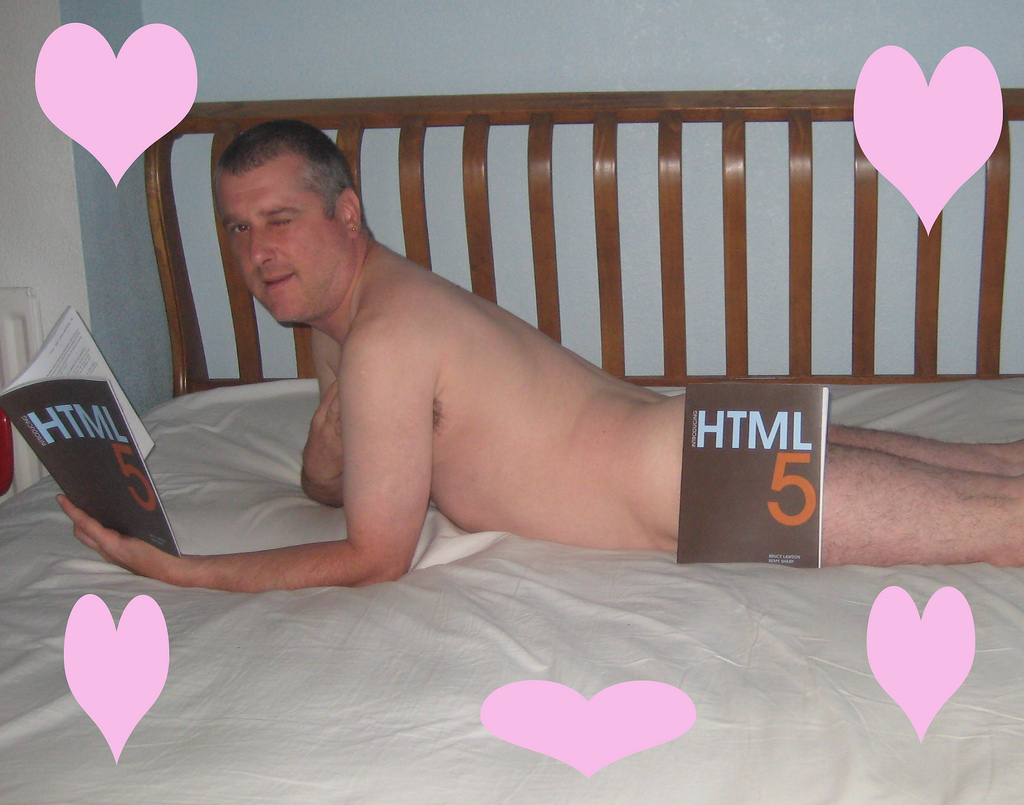 HTML5 looks to be the overwhelming favorite development platform of choice for mobile developers, according to a new study by Kendo UI, which makes an HTML5 toolkit for mobile web development. Already, 50 percent of developers have developed in HTML5, and 90 percent plan to use the technology in 2013.

Only 15 percent of developers would go native-only when building an app for multiple platforms, a stat that might be a little shocking to those witnessed Facebook famously and loudly abandoning HTML5 development last year in favor of a faster, smoother, better native app experience.

See the infographic: What developers do with HTML5

“Most developers were not impacted by that Facebook decision,” Kendo UI EVP Todd Anglin told me yesterday. “One thing that gets overlooked often in the Facebook news is that Facebook hasn’t abandoned HTML5 at all … just changed their use of it.”

In fact, the new Facebook app includes a lot of HTML5, Anglin said, adding that Facebook has said that HTML5 makes it faster to develop and maintain multiple apps. 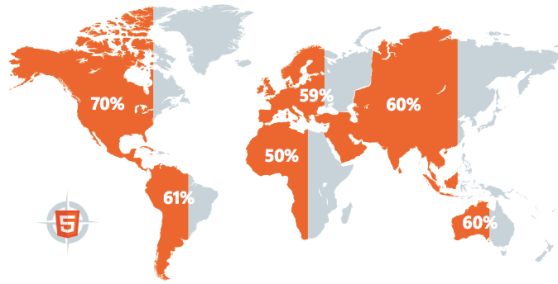 Above: Developers who are actively using HTML5

HTML5 on the desktop

HTML5 on mobile is nothing new. But what about HTML5 on the desktop?

It turns out that HTML5 could be huge on the desktop, with 66 percent of developers interested in developing HTML5 apps for Windows 8, almost half interesting in building apps for Google’s Chrome OS, and another third thinking about developing apps for the emerging Firefox OS.

“It’s the final frontier for where HTML5 should go,” Anglin said. “And it begs the question … why don’t we think of this as an equal option for a PC?”

On a desktop PC, HTML5 would not be limited by a relatively puny mobile processor, either, meaning that developers could do even more with HTML5 video and interactivity. What that means, Anglin said, is that you could have a complete unified strategy for all mobile operating systems and desktop systems at one time … that uses the same codebase and the same developer skill set. 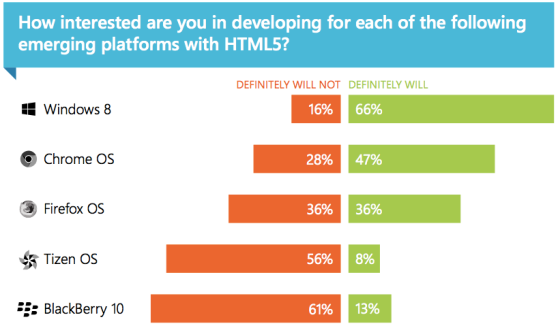 Above: HTML5 for the desktop

A growing strategic solution to the challenge of multiple platforms seems to be the “one + HTML5” plan, in which developers build one app for a key target platform in native code — although it may also contain some HTML5 — and one app for all the other desired-but-not-core platforms in HTML5.

Typically, the “one” is iOS, although it could also be Android, and the HTML5 solution is for BlackBerry, Windows Phone, and any other desired platforms.

Still, given a choice, most developers would either do a pure HTML5 app for all platforms, or a hybrid app: HTML5 core, with native wrapping on each targeted platform.

Above: Native vs HTML5 vs Hybrid apps

Only a quarter of developers now believe that HTML5 is overhyped, while almost half strongly believe it is not.

“Developers are now beyond the hype curve,” Anglin said. “Even though some developers think that  HTML5 is overhyped, that doesn’t mean they don’t think it’s a platform that is both usable and important.”

iOS and BlackBerry: both hard to develop for

While iOS is a top platform, developers say it’s difficult to develop for. In fact, iOS ranked just under the notoriously challenging BlackBerry for development difficulty. Sixty-four percent of developers said that BlackBerry was challenging — and having developed two apps for the platform myself, I agree — while 69 percent said that iOS was difficult.

Objective-C is not the newest or widest-known language in the world, of course, and Apple does put a few hurdles in developers’ paths as well.

“What’s surprising to us is not that it’s difficult, but that’s it almost twice as difficult to work with as Android,” Anglin said. “We would have thought developers would rank Android equal to iOS or even harder, since there are so many more devices in the Android ecosystem.” 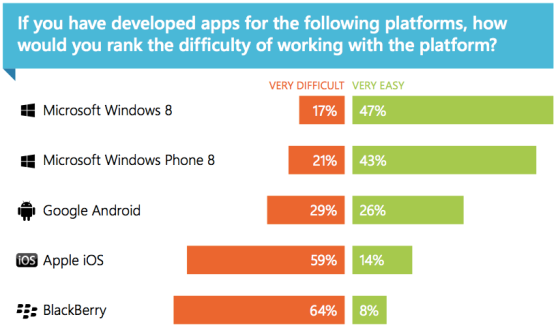 Above: Mobile platforms: how difficult?