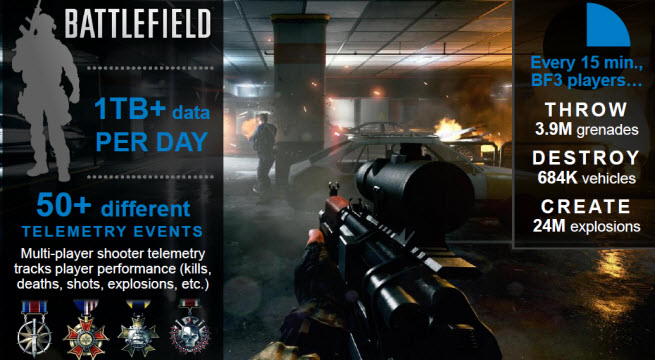 The Battlefield 3 first-person military shooter launched more than a year ago, and it still generates more than 1 terabyte of data a day. Game publisher Electronic Arts knows that because it tracks more than 50 different telemetry events associated with multiplayer combat for each player in a game.

This is just an ounce of EA by the numbers, and it’s why Rajat Taneja, the chief technology officer at EA, knows that every 15 minutes, Battlefield 3 players throw 3.9 million grenades, destroy 648,000 vehicles, and create 24 million explosions. Tracking all that data isn’t easy, especially as we move from 200 million console and PC gamers to more than 2 billion gamers on many platforms, according to a presentation Taneja is making at the Morgan Stanley technology conference today.

In a popular iPhone game, the data is equally plentiful. The Simpsons Tapped Out tracks more than 120 different telemetry events, such as in-game economy purchase. Players have spent more than 1.97 billion donuts (its virtual currency), placed 7.36 million Kwik-E-Mart stores, and built 3.43 million Krusty Burger restaurants. It generates 150GBs of data and 4.5TBs a month.