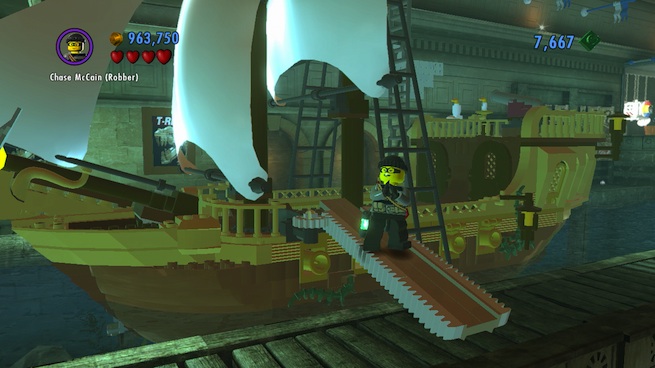 I wanted to kill someone — anyone — in Lego City. But whenever I tried to start a fight, people jumped out of the way or magically picked themselves off the ground after I rammed them with my police car. Either everyone is Superman or I’m just playing it wrong.

After a few minutes, I realized it was definitely the latter. The world of TT Game’s Lego City: Undercover (out March 18 for the Wii U) is a safe space, built on Lego bricks and studs and not on blood-soaked tales of gang wars and criminals seen in other open-world city games like Grand Theft Auto or Saints Row. You can stop crimes — you play as the veteran cop Chase McCain — but it’s the kind of crime filled with so many jokes and hijinks that it wouldn’t look out of place in a Looney Tunes episode.

You won’t find any sort of deadly weapons here: You handcuff foes after slamming them to the ground with throws and Aikido-inspired moves. And you can forget all hopes of using attack helicopters or tanks to demolish the city.

“It just wouldn’t be right, would it?” said executive producer Loz Doyle. “It’s a Lego City game, and the city is a very safe world, really. We can’t have that kind of stuff in there.”

But just because TT Games designed Lego City: Undercover with a younger audience in mind (who probably played with the toy company’s long-lived line of City-themed Lego sets) doesn’t mean that we older folk are left out. I traversed through the virtual city with the same sort of awe I have when I see huge Lego structures in person. And the lack of violence isn’t a deal-breaker — you’ll always have something to do, whether that involves side missions, finding collectible items, or finishing McCain’s hilariou story.

While you can’t kill or maim anyone, Undercover has a lot of the mechanics we’re familiar with from GTA-style open-world games. You can still grab a car at any time, but it’s not necessarily stealing, since McCain uses his status as a police officer to coax drivers into lending him their vehicle. And since he’s so damn good at his job, you don’t even have to step out of your current car to do it — as long as your vehicle is next to the one you want, pressing X will launch McCain out of the old car and into the new one. 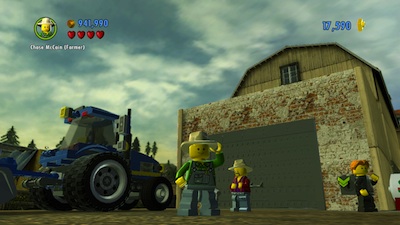 As the Undercover name implies, being a cop in Lego City is more than just donning a blue uniform. Major story missions will unlock disguises for you to use, giving you different abilities: You use the miner costume to blow up boulders with dynamite, the firefighter outfit to put out fires, and so on. You can manage your wardrobe using the Wii U’s GamePad screen, which also serves as your communicator — other characters will speak to you directly through the controller’s speakers — and city map.

Sometimes, the most interesting moments in an open-world game happen when you least expect it. One of the first missions in Undercover has you chasing down a bank robber, and you have to knock his car off course to catch him. But it seemed that the fine public transportation system of Lego City decided to do it for me — the criminal drove directly in front of a train, obliterating his car and forcing him to continue his getaway on foot.

Odd glitches and bugs are also a staple of the genre, but I didn’t find anything of that sort during my demo. When I asked Doyle about it, he felt that Undercover is “really clean” after his team squashed over 50,000 bugs during a rigorous play-testing phase.

“I wish I’d done a video with some of the bugs [we had],” said Doyle. “We developed a new physics system for the vehicles, and when we first put that in, sometimes the cars would for no reason ping themselves out of the world and fire up into the sky.” 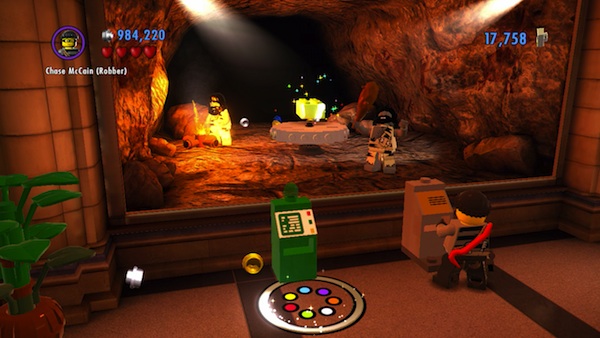 I saw a lot of slapstick humor, but it was TT Games’ love for movies and TV shows that genuinely got a chuckle out of me. Parodies of Titanic, The Dark Knight, Mission Impossible 2, Starksy and Hutch, Dirty Harry, Colombo, and much more appeared during my hour-long playthrough.

The dialogue sounds sharp and witty, and some of the tongue-in-cheek writing is very self-aware: At the police station, one character asked, “Why is it that all furniture is self-assembly these days?” as I was rebuilding a closet with Lego bricks. And then we have Frank, McCain’s dim-witted but well-meaning partner who’s afraid of imaginary monsters and pronounces computer as “comp-u-per.” I have a feeling people will either love him or hate him.

The city itself is a combination of different locations from famous metropolitan centers in the U.S. You begin exploring an area that’s an obvious homage to San Francisco and the bay that surrounds it, complete with a large Golden Gate Bridge lookalike.