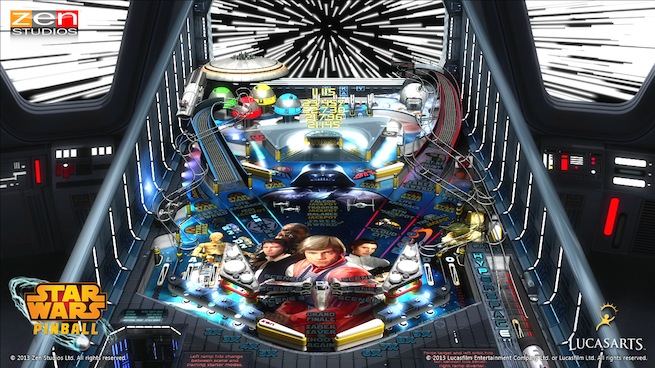 We sure have been talking about Star Wars a lot lately.

With Disney purchasing LucasArts and LucasFilm, an upcoming action game, and a new film trilogy on the way, the 36-year-old franchise is poised to make a comeback after those last four movies. So while we’re reinventing Star Wars, how about some pinball games?

That may or may not be the thinking behind Zen Studios’ Star Wars Pinball, the latest paid downloadable content for the developer’s free Pinball FX 2 and Zen Pinball 2 platforms, which are available on pretty much every device capable of playing games. The first three of 10 planned Star Wars tables come out this week on Xbox Live Arcade, the PlayStation Network, the Mac and iTunes App Stores, and Google Play. The initial offering includes cabinets based on bounty hunter Boba Fett, the Star Wars: The Clone Wars TV series, and Episode V: The Empire Strikes Back.

And hey, guess what? It’s awesome.

Zen Studios has always prided itself on its platform featuring the most realistic physics of any virtual pinball game available, and someone else would have to perform some arcane wizardry to outdo them. Everything just feels right: Balls bounce and roll like they do in reality, you can do crazy flipper saves and aim your shots like on an actual machine, and you can even jostle the cabinet to try and save your ball. This is true across all of the Pinball FX tables, but if this is your first experience with the platform, you’re going to be very impressed.

And since these tables aren’t restricted to things that have to exist in our universe, you’ll see things like a 3D render of Darth Vader who stops your pinballs in mid-air and destroys them with the Force. Or a “boss fight” with an enemy who moves around the table. Or Boba Fett zipping around for no reason other than that it looks badass. It’s all very cool and immersive in ways that physical pinball machines simply can’t be. 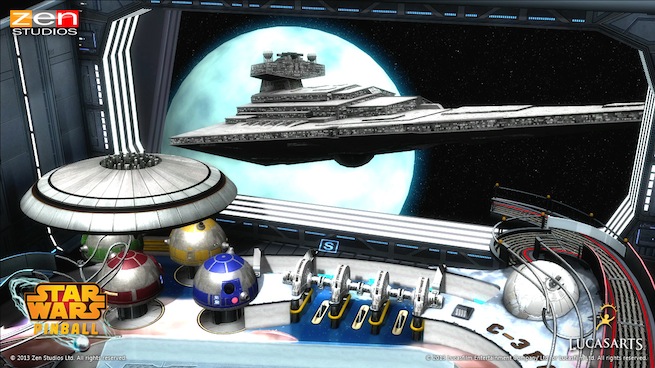 The three tables have different personalities. Boba Fett is very fast and rewards you keeping the ball moving around without demanding many precise shots. The Empire Strikes back is more about accuracy and skill, and Clone Wars has a little of everything. Depending on your mood and preference, one of these tables will appeal to you. The Empire one is probably the most completely executed one with the most interesting modes, but the more action-based Fett and Clone Wars tables are good if you just want to hop in and knock some bumpers around.

All three include “missions” of sorts that you activate by hitting a set number of targets. Boba Fett pursues bounties, and Clone Wars and Empire have scenes based on ones from the TV show or movie. It’s interesting to see events like the Battle of Hoth translated into pinball (you shoot the ball through a round track to simulate a Snowspeeder winding its tow cable around the legs of an AT-AT), and these versions are clever without being overly gimmicky.

Like the rest of the Pinball FX 2 library, Star Wars includes a few local and online multiplayer modes in case jockeying for position on leaderboards is not competitive enough for you. You can take turns on the same table with up to three friends, or you and a buddy can play on your own tables in a race to see who can rack up a set number of points first. The head-to-head mode in particular adds some interesting frantic tension to the game, especially if your opponent is sitting right next to you. 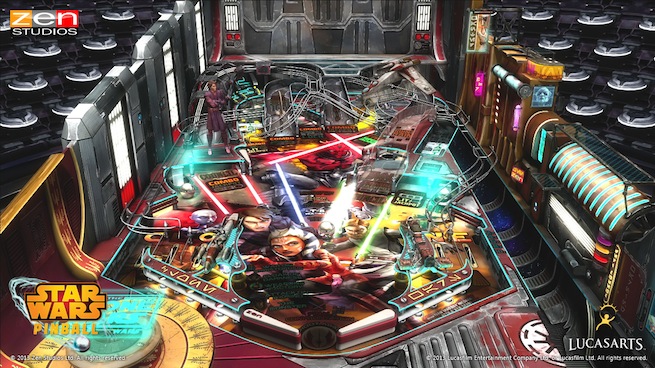 I know that complaining about the sound effects in a pinball game is a bit like complaining about the gunshots in a first-person shooter, but in some cases, Star Wars Pinball overdoes it. This is especially a problem on the Clone Wars table, in which the show’s overly dramatic narrator announces every single thing that happens. And between those pronouncements, you also have Yoda spouting fortune-cookie style morals from various episode openings with zero context. Interestingly, voice actor Tom Kane plays both of these characters, so if you’re a huge Tom Kane fan, this table is just for you.

This is less of an issue on the Boba Fett and Episode V tables. The clips still come at at you at a pretty steady pace, but you get more variety. It seems odd to say this about the Fett one in particular, since the only voices you hear are actor the bounty hunter’s, some droids, and occasionally Jabba the Hutt, but I didn’t burn out on them nearly as quickly.

Episode V mostly includes sound effects and clips from the movie, which are great. It also has some less-good stand-ins for Luke Skywalker and Han Solo, but it also has the most samples of the three, so you won’t be hearing the same things over and over. Having said that, though, lines like Admiral Ozzel’s “We have thousands of probe droids searching the galaxy,” or Luke’s “Now all I have to do is find this Yoda … if he even exists” started to get old.

Pinball FX assumes you have at least a passing familiarity with pinball terminology and strategies. And while each table includes detailed instructions for the various missions, multipliers, and bonuses, these rule sheets might just confuse you more if you don’t know some of the lingo. I assume most players know what the difference is between upper and lower flippers, but will they know what a “sinkhole” is? How about an “outlane,” an “orbit,” or an “autokicker”? You can probably reason out what most of these things are as you’re going, and the instructions have pictures to help you along a little, but if you’re not up on the lingo, you’ll have some trouble figuring out exactly what you’re supposed to do.

Episode V has a particular minigame that is pretty much the worst thing in the entire set. After you light up the right things, you can drop your ball through one of those sinkhole things, and the game cuts away to a first-person perspective of Luke facing off against that little laser-spitting training droid on the Millennium Falcon. The droid will move around and fire, and you have about a half-second to move the lightsaber into the right place to deflect the shot. It’s twitchy even by pinball standards, and even when I succeeded, I had no idea why or how what I’d done had worked. “Jedi Training” is so obtuse and annoying that I actively tried to avoid activating it.

Did you miss the part where this is Star Wars Pinball? If you like both of those things, and you have a device capable of playing video games, you really have no excuse not to pick this up.

Star Wars Pinball comes out this week as downloadable content for Pinball FX 2 and Zen Pinball 2 on Xbox Live Arcade, the PlayStation Network, the Mac and iTunes App Stores, and Google Play. The developer provided GamesBeat a free XBLA download code for this review.