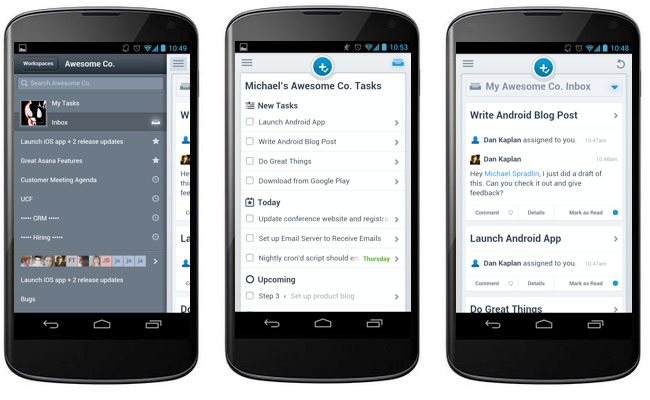 Asana has been laser-focused on improving task workflow for large teams over the past few years, but so far you could only access it on your computer or iPhone. Today, the company is finally opening up to Android smartphones with the launch of a new app.

Founded by former Facebook employees Dustin Moskovitz and Justin Rosenstein in 2009, Asana aims to solve the common headaches around project management and task management for companies. As Rosenstein told us last year, the company wants to put a stop to “work about work.”

Asana began work on the Android app during its last Episode, a unique interval of time that it uses to chart its development progress, Rosenstein said. Asana lags far behind other team productivity services, like Yammer and Campfire, when it comes to offering an Android app.

“We wanted to make sure that we’d cracked the nut of building a mobile experience that people love before we released to another market,” wrote Rosenstein in an e-mail to VentureBeat. “Once we’d secured a [greater than] 4.5 star rating in the iTunes App Store and we were hearing rave reviews of our iOS app, we knew it was time.”

“Focusing on a single platform — iOS — has allowed us to be meticulous about our mobile development, from responding rapidly to user feedback to developing what we consider to be the best user experience for mobile collaboration and productivity available today,” he added.

The Asana Android app functions as you’d expect: You can create, assign, and edit tasks; search your Workspaces within the service; add comments to tasks; and use the company’s Mobile Inbox for managing projects. The app supports Android Gingerbread devices (Android 2.3), but Asana recommends using it on phones with Android 4.0 or higher.

Asana’s service is free for teams up to 30 members, and it starts at $100 a month for larger teams. Given how much money companies typically spend on productivity and communication training, Asana’s fee will likely feel like a drop in the bucket.

So far, Asana hasn’t released an iPad app, and that likely means we’ll be waiting a while for an Android tablet app as well. But Rosenstein tells me that tablet development is definitely in the company’s long-term roadmap, but for now it’s focusing on web and smartphone apps.

“We think that the tablet experience is more than just a “big phone” experience,” Rosenstein wrote. “As you might expect from a company out to design the future of work, an Asana tablet application needs to be built for the tablet UI and use case, and we’re studying the problem around this.”

The San Francisco-based Asana has raised $38.2 million so far from Marc Andreessen, Owen Van Natta, Peter Thiel and others.