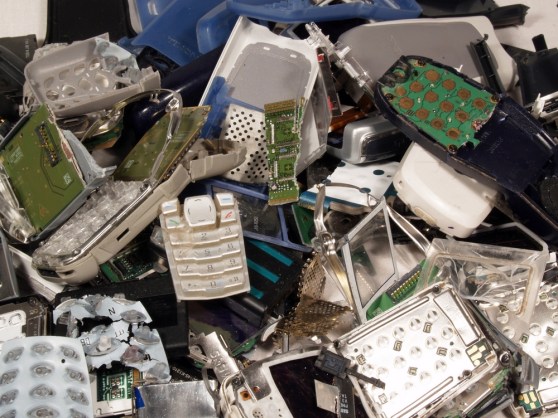 BARCELONA — 1.7 billion people got a new mobile phone handset last year. What happens to the old ones? Ten million of them have been reused and renewed by eRecyclingCorps. “If subsidies are the drugs of the mobile industry, then incentivized device recycling is the methadone,” says CEO Dave Edmondson from the Mobile World Congress.

“Those 1.7 billion phones will retain one-third of their value 24 months into their future. That is 100 billion dollars worth of economic value that we are allowing customers to walk into the shop with, walk out with, and then put in a drawer.” Edmondson contends that only 1 percent of handsets worldwide and 1o percent in the U.S. are recycled or reused.

ERecyclingCorps works with five out of the top seven U.S. mobile operators to offer consumers discounts on a new phone or payment plan when they trade in their old device. My slightly battered 2-year-old Samsung Galaxy SII, for example, is worth around $100. “Unincentivized recycling doesn’t work, ” says Edmondson. “Customers intuitively know that the device they just made a phone call on has some value, even if they don’t know how to monetize it.” The company’s oldest customer — Sprint =- has publicly stated that for every 10 new phones it sells, four are traded in. By 2017, Sprint’s CEO wants to increase that to nine out of 10.

When a customer walks into a shop using eRecycling’s system, they are asked a few simple question about their old phone: Does it power on? Does it have a good LCD? Is there anything broken? The answers are combined with the model type to calculate a trade-in price.

Old phones are shipped to a central facility where the data is erased and they are tested to see if they can be reused. If components are damaged, the device is given a new keyboard, screen, or camera. Finally an upgraded OS and operator-specific software is installed. Phones whose parts cannot be reused are broken down so the raw materials can be recycled. But the company estimates that 80 percent of incoming devices are reused as is or renewed.

There is no agreed definition for what constitutes a refurbished phone. ERecyclingCorps has teamed up with 20 other companies to define precise standards for what it calls a renewed phone. Every time the user moves the slider up and down on a sliding phone, for example, you get wear and tear on the ribbon cable. As long as it works, most refurbishers will not replace it but to qualify as a renewed phone the ribbon must be upgraded since it is a potential point of failure.

So where do the renewed phones end up? Surprisingly, 50 percent of them as resold within the U.S. as insurance replacements, for prepaid programs or used by operators to acquire new customers at a lower subsidy cost. Feature phones often go to sub-Saharan Africa while smartphones are more likely to end up in the hands of an Indian or Chinese urbanite who could never afford a new iPhone.

Although eRecyclingCorps is a relatively new company (it was founded in 2009), its management team could not be more different from the typical starry-eyed young startup founder. It’s populated by battle-hardened mobile industry veterans, most of whom have held senior posts at mobile operators and device manufacturers, which is not to say that they are not idealists.

“The mobile industry has grown from nothing to a trillion dollar business in 30 years by focusing on the front, ” argues Edmondson.”What’s the next network upgrade? What’s the new application? Nobody looks at the backend, which is creating the largest environmental mess in the history of the world. How many companies at Mobile World Congress are talking about that?”