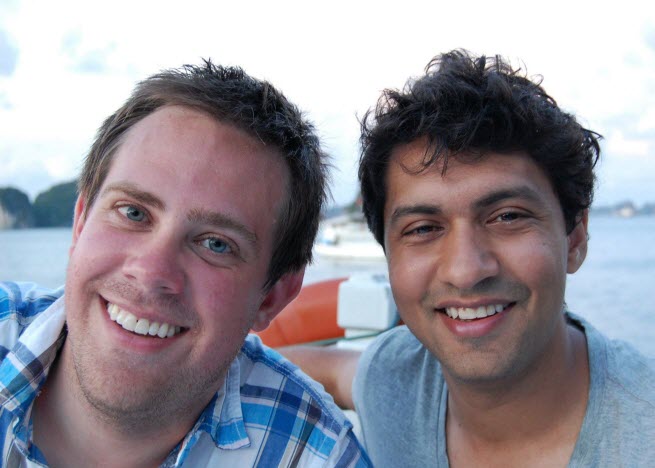 Started by the team that created Zynga’s FarmVille, Red Hot Labs has raised $1.5 million in funding to create a mobile-technology platform and the games that prove it works.

The San Francisco company, started by founders and Zynga veterans Amitt Mahajan (pictured right) and Joel Poloney (pictured left), is creating a platform that allows developers to create games rapidly and bring them to market on multiple other platforms. And to show how well it works, the team is also creating mobile games.

“It’s an approach where we’re eating our own dog food,” Mahajan told GamesBeat.

Investors include Andreessen Horowitz, Greylock Partners, SV Angel, General Catalyst, and Japan’s IT-Farm. Angel investors in the company’s previous seed round include Keith Rabois, Chris Dixon, Bill Tai, Charles Huang, and Kai Huang. It’s not a big amount, but the investors are an all-star team. The hope is that the company can create a platform that mobile developers can use to create hits that spread in a viral fashion, lowering their expenses for advertising their own games.

Mahajan and Poloney proved their mettle at Zynga. They co-founded MyMiniLife, a social virtual world company, after they got out of college. They sold that business to Zynga in mid-2009, and the social-gaming giant used the MyMiniLife technology and its team to quickly launch FarmVille, which became its most popular game of all time. Zynga used that technology to produce a variety of other games, and the Red Hot Labs team has veterans who worked on games such as FrontierVille and CastleVille. The new startup wants to essentially do the same thing for mobile games.

“In the last few years, the combination of powerful technology combined with intuitive user interfaces built on top of Facebook has disrupted the industry and changed the way consumers interact with one another,” said Amitt Mahajan. “We believe mobile is the obvious next disruptive platform, but the tools to realize its potential do not yet exist. Our focus is on creating better ways of  building and distributing applications that will be essential to companies and consumers in an increasingly mobile-­centric world.”

The team has six employees and was founded last year. Mahajan spent time in Japan after leaving Zynga and watched the mobile-gaming explosion there, where they’re advertised on TV.

“The success with FarmVille came from a powerful technology with an intuitive design on top of a disruptive platform,” he said.

But the team saw there were huge gaps between what was available for making Flash games on Facebook and the tools that can be used to make games on mobile. Mahajan said that the team has created tools that enable fast game development on mobile. He said they enable the development of cross-platform games in perhaps half the time it normally takes.

Rivals include Game Closure and Ludei. Red Hot Labs will create one server that can be shared across multiple games, and it will bring down the cost of user acquisition.