Full disclaimer: Before joining VentureBeat, I did some consulting work for Gun before it got into the game-making business.

A startup publisher operating out of Lexington, Ky. with only $1 million in series A funding will probably never be the big dog in the video game industry. But Gun Media doesn’t necessarily want to be an Electronic Arts, Activision, or Ubisoft. That’s because Gun chief executive and creative director Wes Keltner is keeping his company light and nimble — almost a boutique shop in a world of corporate mammoths.

Instead of spending his investors’ cash on hiring a support staff to help bring new games to market, he’s bringing in experts and consultants as needed — guys like Robert Bowling, the former creative strategist on the best-selling Call of Duty series. Although Bowling owns his own development studio (Robotoki), he can come in for a bit, lend his know-how for a specific project (like the recently announced tactical shooter Breach & Clear), then go back to work on his day job — all because of Gun’s business model. On Gun’s side, it didn’t have to keep an industry veteran like Bowling on payroll. The project gets some help from a veteran like Bowling; Gun doesn’t have to maintain a high overhead. Light and nimble, win and win. 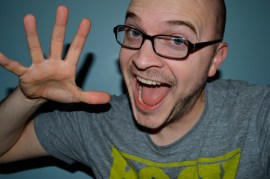 We talked to Keltner to get some more insight on where Gun fits in the marketplace and what it’s doing to change the traditional game-publishing model.

GamesBeat: Can you clarify what exactly Gun Media does?

Keltner: We make video games. I guess we’re probably more closely identified as a publisher, although we’re not a traditional publisher at all. It’s a video game think tank and publisher all acting as one.

GamesBeat: What makes you different from the EAs and Activisions?

Keltner: EA’s huge, and of course we’re not that big. We don’t ever really want to be that big. When people come here to work on projects, they don’t have to sign their life away. They don’t become an employee. Gun doesn’t own them.

It’s more of a place for veterans — people like [Robert] Bowling and others — who maybe have passion projects that they want to work on. Or there are projects that we want to work on. We find people that are like-minded, and we all come together, from the inception of putting together game docs to finding the right dev team and all working together to make a project happen. Then that person can leave if they want, or if they liked it and had a great time, they can stick around.

We don’t have that type of ethos that you normally have in “corporate America” — that doesn’t really exist here. It’s good for creativity. You don’t need a huge team to make games anymore. If all we were focusing on were triple-A console titles, then maybe we would have to try to be more like an EA. But so many different platforms are available to us. It doesn’t require that much overhead.

GamesBeat: Do you guys still do everything a normal publisher would? Can you create a retail disc product, help take care of the box art, the instruction manual, making sure everything gets distributed, marketing and PR, advertising, and so on?

Keltner: Sure. We find people that have done it and done it really well. I wouldn’t be where I am right now if I didn’t surround myself with people who are way smarter than me. I would be a fool to think that I could take on something that extensive by myself. I reach out to friends and colleagues and say, “I’m thinking about taking a stab at this. I don’t know how to do it. Can you help?”

We don’t want to concentrate on the obstacles. We find people that have taken down these obstacles many times.

GamesBeat: So you don’t always do all of those things that I mentioned. You contract and consult on what’s needed at the time. It might just be a temporary partnership with somebody to take on one thing as opposed to always needing this infrastructure?

Keltner: That’s right. We don’t become one of those statistics you see where a studio opens, hires all these people, and then the next thing you know, they have to fire 20 or 30 of them because they started another project. To go through that kind of roller coaster just doesn’t sound very appealing to us nor to the people who’d potentially be working on some of those projects. If everyone comes in under the pretext of “I’m here to help. I’m not here to look out for number one and climb the ladder,” then you get a different quality of work. It becomes more passionate and less about a paycheck.

GamesBeat: Would you ever pair up with a veteran gamemaker on a project that is not the best for him? For example, would you put a shooter expert like Bowling on a Japanese sex game? I’m assuming he knows very little about Japanese sex games, by the way.

Keltner: He knows a lot about Japanese sex games, actually. [Keltner is joking — we think. –Ed.]

GamesBeat: Anyway, would you consider something a bad mix if he’s unfamiliar with the genre? Or would he bring in fresh ideas from an outsider’s perspective?

Keltner: I have a mixed attitude [about this]. I wouldn’t hand that project over to him, but I never shut the door on talking to someone about a project that we want to do. When you strip it all away in games, it’s operant conditioning. It’s psychology. You break any game down to its core features, and it’s really only doing two or three things. You always want to have people in the room who think that way and have that brain for it. But then, when they attach creativity to it, you can go in really cool directions.

We never say, “That guy only knows sports games. We’re never going to talk to him if we’re doing a nonsports game.” That wouldn’t make a lot of sense. That person is still creative. They still have great ideas. Maybe there’s a kernel in there you can pick out that fits fantastically in a role-playing game, even though the guy knows sports.

GamesBeat: How do you budget for anything? You can’t bring all your consultants in to work on every project. I assume that would get prohibitively expensive.

Keltner: Whenever you start having discussions with people in an open and real way and discuss things that people are interested in, money doesn’t always drive that conversation. It’s never like someone says, “OK, this sounds fantastic. I can’t wait to work on it. My rate is a million dollars.” Everyone is very realistic, and everyone understands that we’re still considered a startup. We don’t have oodles of money. We’re all very transparent as far as how this thing works and how we want to pay people to be here.

GamesBeat: You guys are partnering up with Bowling. He has his own company, and he’s making his own game. How do you compensate someone like that, and how do you get his time?

Keltner: Robert Bowling was pretty easy. We split a 10 sack at White Castle, and four hours later he was part of the Gun family. He’s a very cheap date. He’s crazy for White Castle because he doesn’t have it in L.A.

We let him see the ethos of who Gun is and why we’re doing this whole thing. He appreciated it and liked it, so we put together what it would cost for us to all work together. It was a fraction of what he’s worth, but it was more about how it made sense to him, I think. We said, “This is where we are financially,” and he said, “Yeah, I know. That’s fine. Here’s where I am.” I don’t need to get into the details, but that’s how we worked it out.

We planned out how long he would be working with us on Breach & Clear and what his role would be. His role has changed. At the beginning we thought it would be more about consulting. Then he started looking at it, and I think he became more enthusiastic about the project. Then he morphed more into an executive vice president role for Breach & Clear. He liked where the company was going, and so he’s got some equity in Gun now. He’ll be sticking around in and out of projects that we’re working on going forward.

GamesBeat: What can you say about any non-Breach & Clear projects that Gun is working on?

Keltner: They’re so early that it just wouldn’t make a lot of sense to go down that route yet. We are already working on design docs for two other titles. They’re not tactical shooters, I can tell you that much.

Breach & Clear is Gun’s first game, and it releases for iOS and Android this spring.