Thom Yorke hates the music industry. When Radiohead released the pay-what-you want In Rainbows in 2007, Yorke’s  goal was nothing less than the complete upheaval of the industry that he was a part of.

Unsurprisingly, little has changed. The Radiohead frontman still isn’t crazy about the music industry, though now it looks like he hates tech companies like Apple and Google just as much.

“They have to keep commodifying things to keep the share price up, but in doing so they have made all content, including music and newspapers, worthless in order to make their billions,” he said in an interview with the Guardian. 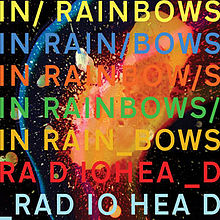 Above: In Rainbows left its mark on more than just music.

From anyone else, Yorke’s comments would be panned as the ravings of a disconnected malcontent, but as the frontman of one of best and most innovative bands in the world, Yorke commands a lot of attention.

And he’s right — well, mostly. For Apple, Google, and Amazon, selling music isn’t really about the music at all — it’s about locking people into their ecosystems. The same goes for apps, movies, games, and books — commonly referred to as “content.” All of these media are just subtle variations of bits and bytes, and their statuses as unique art forms tend to take the backseat. (And let’s not even get started with streaming services like Spotify, which take music to an oxygen-like level of commodity.)

Yorke hates this reality and wants things changed, even though the momentum is clearly going the other way. “I still think [the system] will be undermined in some way. It doesn’t make sense to me,” he said.

Yorke seems resigned, but perhaps he shouldn’t be. Since Radiohead spearheaded the pay-what-you want funding model five years ago, we’ve seen it applied to just about every form of media, including video games and comedy specials. Pay-what-you-want is even core to Bandcamp, where bands often offer their albums for free.

Yorke may be looking for a more revolutionary change in the way music is distributed online, but in many ways that revolution is already here.