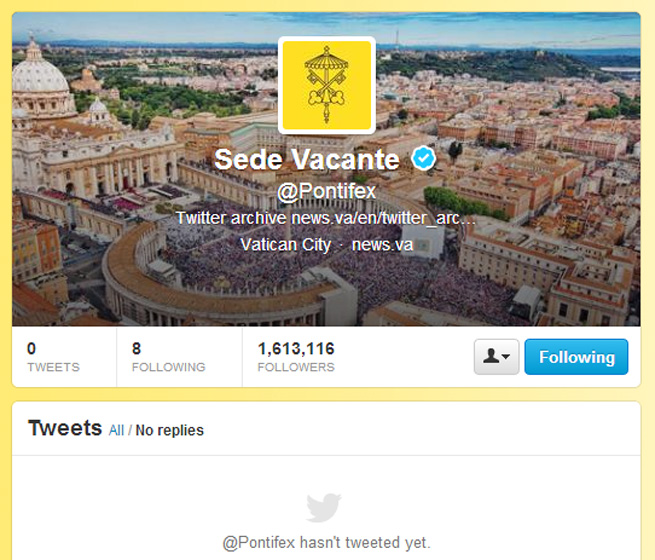 In a strange social media move, the Vatican has deleted all of the tweets sent from Pope Benedict XVI’s @Pontifex account to make way for a new pope.

Benedict XVI was the first pope to use Twitter to communicate with his flock (though, of course, he’s the only one to hold the pontiff position since Twitter’s founding), and he urged Catholics to use Twitter to spread the “Good News.” The account has more than 1.6 million followers. Benedict XVI stepped down today as pope, and his resignation will become official at 5 p.m. Pacific. His new title will be “pope emeritus,” which was created just for him.

“Thank you for your love and support. May you always experience the joy that comes from putting Christ at the centre of your lives.”

The Twitter account’s name now is titled “Sede Vacante,” which is the name of the period when the papacy is vacant.

Those who want to read through an archive of Benedict XVI’s tweets can still do so at the Vatican’s website.

While it makes some sense to have the Twitter account reserved for just the thoughts of the current Pope, it does remove a lot of history from the account. All of Benedict XVI’s tweets that had been re-tweeted by followers now will not show on their timelines as well.

It’s almost as if Benedict XVI’s messages had never been spread in the first place.