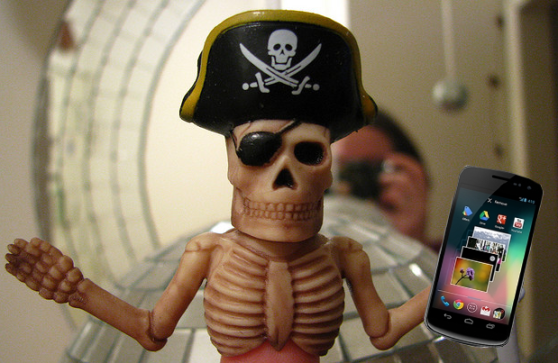 Do you know much money Hollywood loses every time you download a screenshot from The Hobbit?

Probably nothing, but that isn’t preventing Warner Bros. Studios from going after Android apps like “Hobbit 3D Wallpaper HD,” which it says infringes on its copyrights.

And Warner Bros. isn’t alone. Companies like Marvel, Sony, and Viacom are all bombarding Google and Apple with claims that their app stores house dozens of apps with illegal content, as Reuters reports.

Above: This is the new, scary face of piracy, right?

Going after tiny wallpaper apps is obviously pretty silly, but for Hollywood, the apps mean more than just lost income: They represent the new, mostly uncertain frontier for copyright infringement. And Hollywood is just starting to understand it.

Apparently, plenty of apps like “MovieTube” and “Full Classic Movies” are out there, and these offer links to dozens of full-length pirated films. Now, chances are these apps are just one-way tickets to Virusville and offer no movies at all, but Hollywood doesn’t care: They must be destroyed.

“With the rise of the second screen comes a new band of villains who pose a serious threat to the entertainment industry’s move to mobile,” Reggie Pierce, the CEO of mobile copyright protector IP Lasso, told Reuters.

But mobile piracy is in its infancy now — if it exists at all — because of one main factor: Data plans. Unless you’re one of the increasingly few people with unlimited data plans, chances are that you’re going to wait until you get home to download that illegal copy of Flight. (Though you probably shouldn’t at all because Flight was terrible.)