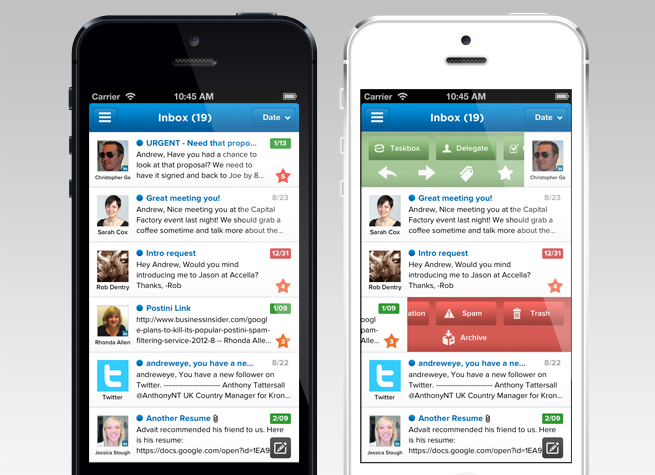 You know what sucks worse than email? Waiting in line to use an app that’s supposed to make using email easier. That’s exactly what you’ll have to do if you download the hotly discussed mobile email iPhone app Mailbox.

Fortunately, rival Taskbox can do pretty much everything Mailbox does, but without the ridiculously long waiting period.

Like Mailbox, Taskbox is an iOS email client app that operates under the assumption that it’s much easier to plow through your messages using figure gestures on your smartphone. For example, flicking your fingers right lets you archive or delete worthless messages, while swiping the opposite direction gives you the option to mark a message important.

“Clearing through your messages is really only half the battle people face when dealing with email overload. The real challenge is what to do once you’re finished,” Taskbox CEO and founder Andrew Eye told VentureBeat in an interview recently. “All your assignments and tasks usually originate from the inbox, so we really felt it was necessary to do something that addressed those problems, and not just improve your mobile email experience.”

I first encountered Taskbox back in October 2012 shortly after its initial launch and was pretty much sold on the experience. However, the startup is planning to launch a new version with a cleaner, more simplified UI, which I’ve had a chance to check out.

When you mark a message as important in Taskbox, you actually move it into a separate “Taskbox” folder and have the option of rating it by importance on a scale of 1 to 5. You can also mark messages as “complete” or “delegate” (both of which also have their own sub-folders), send short canned responses, and schedule deadlines.

Right now, the app only supports Gmail and Google Apps accounts, but more email services are planned for the future, as are native apps for Android, Windows Phone 8, and BlackBerry 10. The app runs into some issues with threaded conversations that all appear as separate messages, but if you’re constantly sorting your email through Taskbox, they shouldn’t cause you much of a problem.

The iPhone app will also set you back $3, whereas Mailbox is free; still, there are some advantages to paying for the app. Eye points to Mailbox’s bout of downtime last week as one reason to opt for a paid service.

“Downtime in email is unacceptable,” he said. Unlike Mailbox, he explained, Taskbox isn’t running all your data through its own servers, which means there’s no downtime and fewer security risks.

“Taskbox is a pure email client with no server technology necessary. That means no storing or mining of your personal information on proprietary servers… [and] no additional company/technology between you and your mission critical email,” Eye said.

Founded in 2012, the Austin, Tex.-based startup has six employees and is seeking a Series A round of funding.