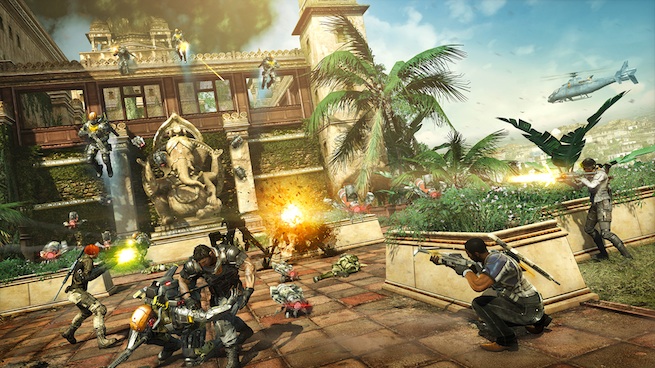 Being tossed into the middle of Fuse is like diving head-first into the deep end of the pool when you don’t know how to swim. It’s basically a third-person cover-shooter, but it’s easy to get lost in all the wild details of alien technology, character-specific abilities, and the government conspiracy story that wraps it all together.

Out some time later this year for the Xbox 360 and PlayStation 3, Fuse is quite a departure from the inventive platforming and first-person shooter titles that developer Insomniac Games is known for (with franchises such as Ratchet & Clank and Resistance for the PS3). It’s also the first multiplatform game for the studio, with Electronic Arts handling publishing duties.

Though you can play alone, Fuse encourages you to play with others (up to three) in its cooperative-focused story campaign and multiplayer modes.

“[Fuse] is not a shooter that has co-op; it’s a co-op shooter,” said Insomniac brand development director Ryan Schneider to GamesBeat. “Our designers are adamant that they think this is the best four-player co-op game on the market.”

Before you can figure out why Insomniac thinks it’s the best, however, you’ll have to overcome a somewhat steep learning curve since it’s so different from typical shooters like Gears of War or Uncharted. Those games lay out a clear path of destruction for you, and their combat rarely deviates from the duck-and-cover mantra. But you can’t just blast your way through Fuse: Insomniac designed it in a way that forces you to think creatively about the characters’ roles and how you can combine their different weapons and strategies to ensure victory.

It’s a lot to take in, but I found that it all started to make sense after the first 10 or 20 minutes of playing.

Taking a leap of faith

I played an early version of Fuse (Schneider warned that it was 2-months-old) on an Xbox 360, and for the first few minutes, I had no idea what I was doing. I had a feeling that my partner, another journalist playing next to me, was in the same boat.

We were on a mission that took place about halfway through the story mode, where Fuse’sheroes from the covert Overstrike 9 agency — Dalton, Naya, Jacob, and Izzy — infiltrate a heavily guarded enemy compound in the middle of a jungle. Muscle memory from playing other third-person shooters clicked right away as I ran for cover and started blind-firing. But Fuse is about balancing the different abilities of your squadmates, and that’s where things became confusing. 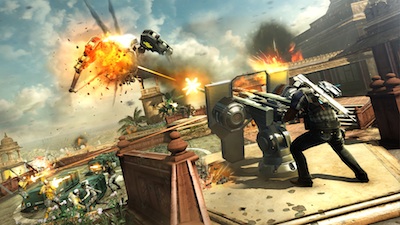 To be fair, Schneider said Fuse has a tutorial to ease you in before it introduces you to the alien-powered weapons that all the characters wield. But in the heat of battle, it was hard to pinpoint who exactly had the invisibility cloak (Naya), the energy-based Mag Shield (Dalton), the crossbow that fired liquid mercury arrows (Jacob), or the grenade that can heal folks from long-range (Izzy).

After some trial-and-error and asking Schneider a ton of questions, my partner and I took out everyone in the area. This is when I learned about the importance of Fuse’s Leap: As long as you have at least one teammate still standing (and not already controlled by another player), you can switch to that character at any time. So you can use Dalton to throw up a shield that’ll absorb gun fire, “leap” to Izzy and use her Shattergun to crystallize enemies while under the shield’s protection, and then jump to Naya to sneak behind the battlefield to get rid of the survivors.

Once I realized that Fuse requires a bit more lateral thinking than other cover shooters, I started to think Insomniac may have something special here. 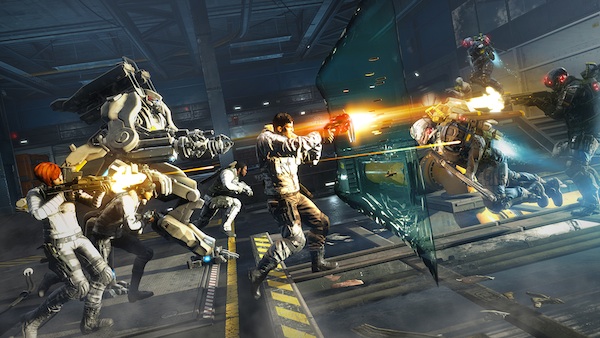 Leaping is fun, but Fuse appeared to shine best when you have enough people to control all four members of Overstrike 9. Two other players joined us in the room for Echelon, a cooperative multiplayer mode where you have to complete a set of randomized objectives: One minute, you might have to defend a weapon cache against a wave of enemies, and the next you’ll face a soldier piloting a powerful missile-shooting robot.

Communication is key, especially as your allies start dropping one-by-one (you revive them with a button press before a timer runs out). And support roles like Dalton’s can make or break your team.

“Dalton’s the floor general if you’re a basketball fan,” said Schneider. “I’ve been comparing him to being like [Los Angeles Lakers point guard] Steve Nash of the group, where he just kind of has to sacrifice himself for the good of the team and just really be a stud support guy. … Otherwise you’re really gonna look like the Lakers — just totally disjointed.”

Due to a crushing difficulty and some game-related bugs, we weren’t able to survive Echelon all the way through. But the small glimpses of brilliance — shouting to one another for help and then rallying back with perfectly executed teamwork — makes me hopeful for Insomniac’s complicated but exhilarating take on the genre.