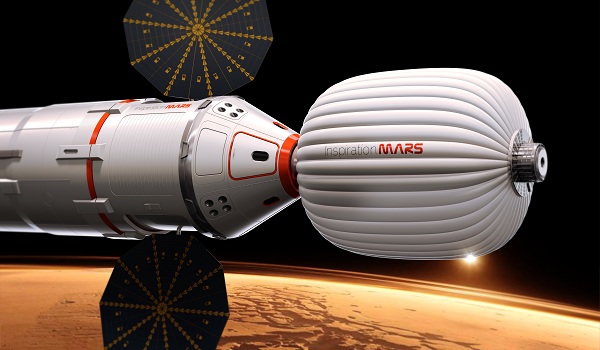 Inspiration Mars, the first private mission to the Red Planet, will likely be a monumental achievement for humanity — and poop will help make it possible.

The two-person crew aboard the ship, which will fly by Mars in 2018, will rely on a shield of water, food, and human waste to protect them from cosmic rays, reports New Scientist. Inspiration Mars was announced last week and is headed up by multimillionaire Dennis Tito, who also reportedly paid $20 million to be the first private space tourist in 2001.

More so than muscle atrophy or sheer boredom, cosmic radiation is the biggest issue the crew will face on the trip. The waste would be dehydrated (to reclaim precious water) and placed into bags alongside the ship’s walls.

“It’s a little queasy sounding, but there’s no place for that material to go, and it makes great radiation shielding,” Taber MacCallum, a member of the Inspiration Mars team, told New Scientist.

It may sound kind of gross, but this is the sort of ingenuity we need to keep pushing space travel forward. And in a strange way, it may be similar to the creative methods early humans used to travel the sea.

Initially, the ship could be lined with water, relying on the Water Wells project for long-term life support in space missions. Water is considered a better shielding material for space missions, since it contains more nuclei than metal (nuclei are what actually block cosmic radiation). The Water Wells design can also purify human waste into drinkable water.

Eventually, the bags full of water will be replaced with dehydrated waste throughout the ship. MacCallum wisely hopes the bags won’t be clear.

The Inspiration Mars ship will also rely on its aluminum skin for radiation protection. Though when it comes to protecting from the burst of particles from solar storms, none of the current shielding suggestions will offer much help. The Inspiration Mars team says it could just point the ship’s upper rocket towards the sun, protecting the astronauts below in the process, in case a major solar flare occurs.