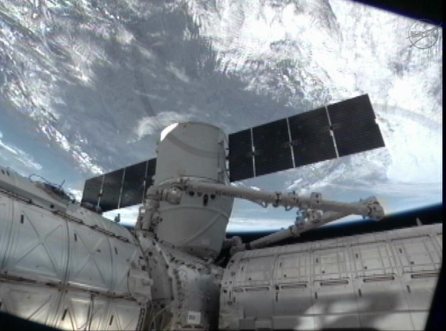 Chalk up another successful mission for the private space company SpaceX.

The company’s Dragon capsule successfully docked with the International Space Station at 8:56 a.m. Eastern this morning following a launch issues with the craft’s thrusters Friday.

According to an update from NASA this morning, the hatch between the Dragon and the Harmony module on the ISS will open tomorrow. The Dragon carries supplies for the astronauts aboard the space station for research on the growth of plant seedlings in microgravity, how metal mixtures solidify, and more. The  capsule shall stay docked with the ISS for 22 days, and it’s currently scheduled to return to Earth on March 25.

It’s the second contracted flight for NASA by SpaceX after delivering supplies to the ISS back in October. An earlier test mission in May proved the viability of SpaceX’s capability to resupply the ISS, and it led to 12-mission contract with NASA worth $1.6 billion. This was the first mission in which SpaceX encountered some sort of malfunction, but the company’s quick response is a good sign for its capability to handle any future issues that may arise.

Check back soon for video of the docking.