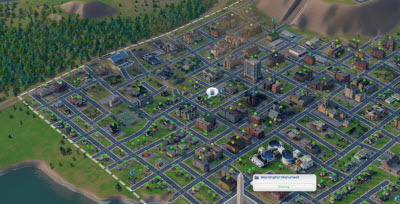 The game creates big challenges that test your abilities as a mayor. Once you get your city into financial trouble, you have to turn it around by cutting services, borrowing money, and getting more businesses and citizens to move into the city and boost tax revenues. It doesn’t matter if you’re a Democrat or a Republican. When your city is in trouble, you have to act. I lost about half my population in a short time and saw whole blocks become abandoned. I had to bulldoze those buildings or run the risk of homeless moving into them, which caused even more outbound migration. I should have known better than to ignore taxes, since the original SimCity hammered that point home years ago when I first played it.

The game gives you lots of alerts to avoid insolvency. If you’re in the red and you are running low on cash, your advisor will tell you that. You can then pull open the budget menu to see what the hourly and monthly finances look like. You’ll want to make sure you don’t get into a tough fix where citizens demand services that you can’t afford. The lessons is that you have to build a balanced city, with all of the right controls.

Once you build all the way out to the borders of your city, you might be stuck. The only solution is to bulldoze your streets and start over again with higher density zones. In past games, you could choose between low, medium, and high-density zones.

But the clever solution in this game is that you don’t have to choose the type of zone, beyond whether it is residential, commercial or industrial. All you have to do is widen your streets. You can do that simply by clicking on a street and spending the money to instantly turn it into a medium or high-density street. If you build a high-density street, the simulation assumes you want high-density development on that street, and then the Sims will automatically develop that kind of property. That’s an enormous time saver when it comes to converting your city from a bunch of single-story buildings to a metropolis. It’s a big investment to widen all of your roads, but it’s worth it once you see the growth really take off on its own. 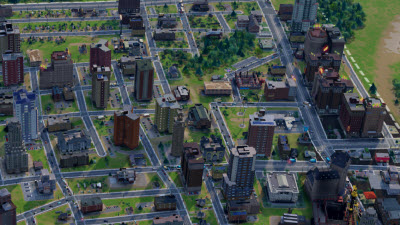 Your simulated city isn’t just by itself in this game. It is part of a multiplayer region that can thrive or decline based on the actions of everyone playing in neighboring cities. This raises the opportunity to specialize as a city. You can play with other people, or you can create up to 16 different cities of your own at the same time. I created two, one that served as my practice city and one that looked prettier.

You can create a gambling city that draws tourists from all over, but you’ll have to deal with the crime influence that comes with it. You can build a coal manufacturing city that provides resources and electricity to the whole region, but you’ll also pollute the air and make your neighbors sick. I played in an environment where my fellow game critics built cities around me.

I put my extra resources out on an open market, and the nearby cities could make use of them. I could also buy resources like coal or services like garbage pickup from the other cities. To engage in such commerce, you have to connect to the larger transportation system via highways, rail, or ferrys.

You can compete with your rivals and see who shows up on the leaderboard, which tracks who is ahead on a global basis in population or whose city is the wealthiest. It also tracks specialties like gambling, trading, electronics, petroleum or metals. Your city can be a leader in pollution, or it can be the greenest city. If you build a university, your city could be a contender for having the most educated Sims. In the future, EA will issue challenges via its SimCity World, allowing for regional or even global competition. 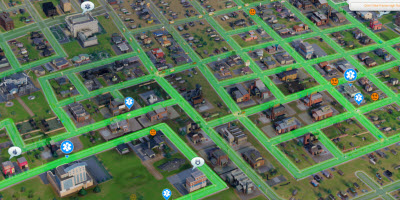 That layer of regional competition adds a lot of social features to a game that was previously a solitary experience. A CityLog sends you messages about your friends’ achievements. You can send gifts to your friends and get together in a Great Work, such as building a major regional airport. All of the neighboring cities have to contribute resources or the Great Work won’t get finished. I set to work on building an Arcology, a sci-fi style ecological haven. But I didn’t get far without contributions of metals, alloys and, of all things, televisions.

An endless amount to remember and learn

“Running things ain’t easy,” as the gangster said in my favorite movie, Miller’s Crossing. The tips for this game are plentiful. You have to have an adequate water supply to keep industrial centers humming. Those centers provide jobs for your residents. But they also pollute the water supply, and if you place a water tower on top of polluted ground water, you’ll make all of your residents sick.

When you place your garbage dumps or sewage pipes, it pays to remember which way the wind is blowing. If it blows across your city’s borders, that’s OK. But if it blows stinky odors over most of your city, you’ll make your Sims very angry.

These interconnections between actions and their consequences will teach you a lot. I liked the fact that every major building is modular, so you can expand a firehouse by adding new fire truck garages, so long as you can afford it. You can add the expansions and sit back and see if they have a desired effect.

If there’s anything you should know at the outset, it’s that bigger zones are better. They can spawn small houses in the beginning. But if you haven’t hemmed the residential zone in with streets that are too close together, they will eventually grow into huge multistory residential towers. You should also spread your services out so you can cover the largest parts of your city, and put them in place as you build so that you can head off problems in the future.

SimCity has delivered a lot of comedy over the years. The Sims speak “Simlish,” a kind of gobbledygook that you can’t understand, but it always delivers the emotion the Sim is trying to convey. Protesters will gather outside your city hall to object to the presence of too many germs. An arsonist playing heavy metal music in his car will drive around setting fires. And if you get bored with your perfect city, you can let loose disasters in it. I didn’t have a chance to see disasters in the version that I played.