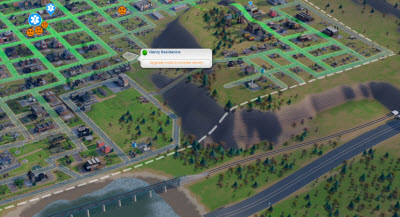 The problem with an always-connected game is that you’ll inevitably have some downtime as the servers occasionally go offline. Sometimes your friends will also go offline. When they do, you won’t be getting as much help from them. This happened only once for me while I was playing the game before its launch. But it’s likely to be a challenge for EA to keep the servers for the game up and running to meet initial demand. You’ll have to log into the Origin servers every time you play, and that means delays. On the other hand, you won’t have to download and install your own patches. Thankfully, your city is dormant while you are logged off.

It’s hard to recover from mistakes

Sometimes the game is too much of a simulation. When your city runs out of dollars, it’s very hard to turn it around. If you put the city on autopilot and run it at triple speed like I did, you may not notice that the city is failing. You can start cutting your budget or do what politicians do: borrow money by issuing bonds.The problem is that you have to then start making payments to pay down the bonds. It becomes an endless cycle as the debt payments rise and your citizens demand better services. You just dig yourself a deeper and deeper hole, and it’s best just to start over.

Sometimes, you just don’t know what went wrong. I built a Las Vegas casino in my second city. But no one ever came to visit my casino and spend money there. I added on new extensions like a blackjack hall, but still nobody came. I had to just bulldoze the casino and I added a recycling center in its place. But the recycling center didn’t collect any plastics or metals from the garbage. I once again had no clue of how to fix the problem. I bulldozed the recycling center and replaced it with an ordinary garbage dump. 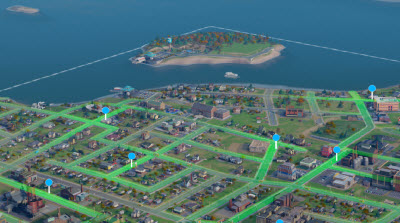 At some point, you’ll run out of land. The patches of ground available to you are limited. That’s the case even though you may be staring at some beautiful regional property that you could expand into. The size of the cities you can build is limited. I recall building cities in SimCity 4 that had multiple power plants, but you can get by just fine with just one power plant in this game.

At some point, I would guess that EA would make extra land available as a microtransaction, where you pay money to get more property. This property limitation is one reason why you’ll have to start a new city or just stop playing the game.

It’s also a pain to be able to see the cause of fires — arsonists — or crimes and not be able to do anything about it. You can build your fire stations or police stations, but it’s up to the cops and firefighters to catch those thieves or put out the fires. When they don’t do that, you just want to scream at them to wake up.

Overall, I have no problem with some limits. You have to make a choice about your hometown when it comes to setting aside land for police stations or parks. But these limitations may mean that a player may drop the game as soon as it’s getting fun.

It’s a joy to see SimCity return in a better form than it has ever been. It is wonderfully complex, but very easy to play. The title is a massive undertaking and it has come together beautifully overall. Hopefully, EA will be able to improve the connected parts of the game, and the experience will become more fun with more players.

By the time you’ve mastered the game, you’ll get an appreciation of how hard it is to run a sustainable city. You can build it around ore deposits, but one day your mine will go dry and you’ll be left with a lot of pollution. The game is as enchanting as it was when it first debuted so many years ago.

The game debuts via PC digital download on EA’s Origin service on March 5. It will be available on the Mac in the spring of 2013. SimCity is rated E10+ by the ESRB.