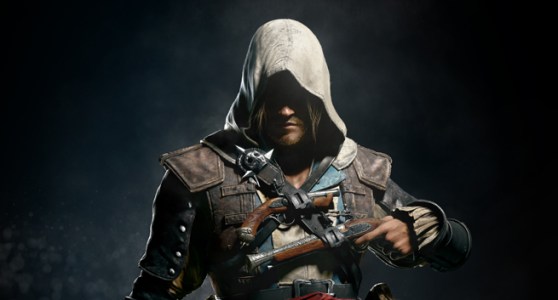 A Jolly Rodger flies from the main mast of the brigantine Jackdaw; its familiar skull-and-bones superimposed over an even greater symbol, the arched battle standard of the Order of Assassins. The man standing at the helm is the pirate captain Edward Kenway … ingenious, brash, feared, and newly recruited into the centuries-old secret war between Templars and Assassins.

Yo ho ho. It’s a pirate’s life for Creed.

Assassin’s Creed IV: Black Flag (releasing November 1 on PC, Xbox 360, Wii U, PlayStation 3, and PlayStation 4) serves as both a sequel and prequel to developer/publisher Ubisoft’s historical action-stealth epics. While modern-day segments continue forward after the death of Desmond, the descendant of Creed’s main heroes, the latter-day action skips back from 1776’s American Revolution to the so-called “golden age of piracy” in 1715. Fans of the series will immediately recognize a connection to past characters.

Edward “is the beginning of the Kenway family saga,” according to game director Ashraf Ismail, and the father and grandfather, respectively, of Assassin’s Creed III’s two playable killers, Haytham and Connor Kenway. “That family got introduced to the Assassins-Templar conflict through Edward.”

This isn’t the elder Kenway’s first roll through the Creed universe, either. He already has a small role in one of the franchise’s novels, Assassin’s Creed: Forsaken.

Edward “comes from poor stock,” says Ismail, and a harsh upbringing made him selfish, impulsive, and rebellious. “The idea of fighting for gold and glory lured him into becoming a pirate. But the assassin’s creed isn’t a selfish ideology, and this is something that becomes a struggle for him.”

The company he keeps probably won’t help. Sticking to Creed’s principals of historical tourism, Edward hangs out with the larger-than-life figures who terrorized the Caribbean. Famous pirates like Blackbeard, Calico Jack, Charles Vane, and Anne Bonney all play prominent roles. “They tried to create their own democratic society,” says Ismail, referring to in-game locations like the pirate stronghold at Nassau. “But they were also pirates, so it failed in a really spectacular way.” The explosive escape from Nassau when the British finally crush the pirate colony there will be one of Black Flag’s major set pieces.

And while Ismail never spells anything out, it’s not hard to guess that at some point Edward will come into conflict with his compatriots, leading to some good, old-fashioned ninja-versus-pirate action. Historically, King George I offered a royal pardon to any pirate who swore to retire from the trade — psychopathic Charles Vane did so repeatedly before they finally hung him — and Ben Hornigold, also a confirmed character, gave up piracy to hunt pirates in the Bahamas. 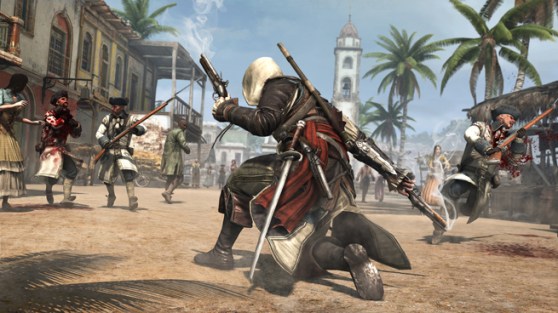 Those won’t be Edward’s only enemies. As a pirate himself, he’ll spend a lot time looting English ships and fighting off hungry sharks as he dives to recover sunken treasure. In addition to the series’ signature hidden blade, Edward favors two cutlasses — we saw footage of him pouncing a British sailor with them — and a brace of pistols. Ismail says that Edward’s two guns — upgradeable to four — played into both a new free-aim mode as well as a melee combo “auto-lock” option that, while not specifically described, did seem like it takes a page from the “mark and execute” feature in Ubisoft’s recent Splinter Cell games. Either way, between Edward’s arsenal and a revised (and clarified) hierarchy of enemies, Ubisoft has mercifully given the combat system another facelift. “You will have to relearn how to use it,” says Ismail.

“It’s a very different world we’re creating,” says Ismail. “Assassin’s Creed is normally about a couple of major cities, and you’re spending your time in those cities. We still have that, but we’ve pushed it to have these very foreign locations.” 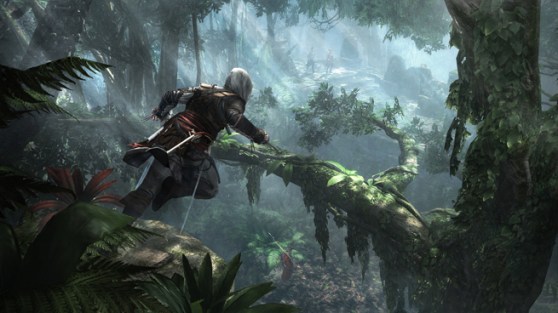 Players will visit fishing villages, naval forts, Mayan ruins, coconut islands, dense jungles (marking a return of Assassin’s Creed III’s tree-hopping traversals), beautifully cavernous pirate coves where smugglers hide their goods (but not well enough), and plantations “where you see the effect of slavery,” says Ismail. “Slavery was an important part of the pirate era, and we touch on it.”

And like Creed’s cities, Ismail promises that it’s all accessible without breaks in the immersion. “When you’re on your ship, you see a beach,” he says. “You can just jump out of your ship and swim to that beach. You see that pier over there? You can dock your ship and jump out.” At that point, you’re on the island, and you can roam it at will with no load screens.

Ismail also plans to take Creed back to its open-ended assassination roots. “The idea is that you have this target in a place with a really cool level design, and you’re told, ‘Do it as you wish,'” he says. “We want to bring this back.”

As for whether Creed might also bring Edward’s son Haytham or grandson Conner back — or even if Edward’s story will extend past this one game — Ismail can’t say. He does insist that Ubisoft has a plan … and a big poster hangs in the brand team’s office showing how everything fits together. That team “focuses on where Assassin’s Creed as a franchise is heading,” says Ismail, “and there is a place where it’s heading.”