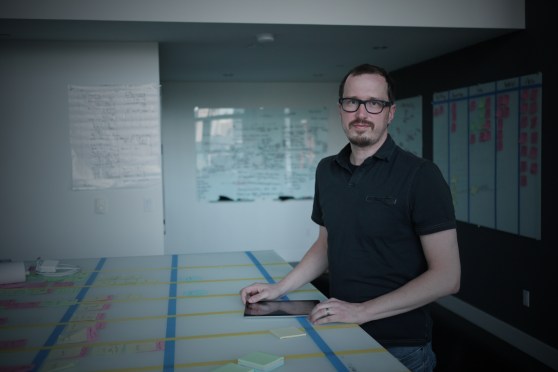 “Everyone knows that if you make HTML5 perform, you change the game,” said Steve Newcomb, the founder of semi-stealth startup Famo.us, in his company’s SoMa loft last week.

His statement is a fact so well established that I have to wonder aloud why he and his small band of geniuses are tackling this particular problem: better, faster, and smoother technology for Internet apps.

After all, when he said “everyone,” that “everyone” includes giants like Google, Facebook, Microsoft, Mozilla — everyone does know that better HTML5 and JavaScript means better web and mobile web apps and an entirely new ecosystem for discovering and distributing content to people all around the world. And everyone has skin in that particular game.

“It’s the great leveler,” Newcomb continues, “but everything else is proprietary to specific devices. … The world is littered with examples where the small company is able to accomplish the thing that the behemoth is not. They all have innovator’s dilemma. And they all have a lot invested in native.”

So, Newcomb and Famo.us are attempting to rapidly change the game with a few different technology tools that could redefine how we see the mobile web in particular. Currently, it’s the second-class citizen of the tech world.

“Most of the other HTML5 companies want to match native performance,” Newcomb said. “We’re trying to make it look like the AOL of yesteryear. The web world has things in it that can go way beyond native.”

The problem with the web

The web has one problem — mobile, desktop, “modern,” whatever — as Newcomb sees it: “It was meant to render a document.

“After 18 months of failing, we realized that rendering engine inside those browsers wasn’t meant to render an app. We had been using the wrong tool for the wrong job.”

Two and a half years ago, Famo.us started out as a Pinterest clone using web technologies. Newcomb’s tech team had been looking for ways to build a better web app. They tried jQuery, Appcelerator, Sencha. “And none of them would work,” he said.

“We had around $700,000 left in the bank when Facebook went back to native [for its iOS app], and we didn’t blame them. … We were like, ‘Oh, my god, we’re screwed. We chose HTML5 to build our product, and it’s the wrong thing.’ We had two choices: Go native, or build our own thing so we can have an app that works.”

In a true application, not just a website, Newcomb explains, you typically have a single-page design with one URL and a lot of motion and interaction.

“Things are a lot more lively,” said Newcomb. “And when you’re dealing with animation, you’ve left the realm of what web developers know how to do and what a gaming engineer does.”

The solution: Build a gaming engine for rendering on the web. “We looked at Unity 3D and Unreal 4 — those guys figured out how to render things quickly and make it look beautiful and insanely performant and exquisitely detailed,” he said. “And we were like, ‘Maybe the web got it wrong all along.'”

In Famo.us, you no longer talk about divs and documents. Everything is in terms of surfaces. Famo.us is capable of rendering hundreds of surfaces at 60 frames per second. Newcomb said that every consumer-facing app he and his team has looked at has fewer than 50 surfaces displaying at a time.

Still, they decided to put their theories and their game engine to the test in a demo featuring the periodic table of elements:

“This is a fundamental stress test of everything that is ruining JavaScript engineers’ lives right now,” Newcomb said. “It’s the kitchen sink of HTML5 problems: infinite scroll view with momentum … being in motion in an app, and then changing your mind. … It’s a disaster in HTML5.”

Newcomb explains the details of how and why Famo.us handles motion — something we hope to delve into with him later. “We started as a rendering engine. we now have a physics engine, and we’ve got one more engine we’re not allowed to talk about yet,” he said.

“When you code up this motion, it’s actually complex. There’s a ton of these using the CSS3 primitive transform method. We don’t. We actually use a physics engine the way a game engine uses a physics engine. This decreases development time by an order of magnitude.

Why one major company is playing ball

Today, Famo.us has announced a new round of funding, $4 million to add to its previous million-dollar seed round. The interesting part of it is, a quarter of today’s funding has come from one major manufacturing company.

Newcomb said, “All the companies that manufacture phones … software is something where they don’t typically have strengths there. That’s where we come in.”

While the proprietary big-name players duke it out to gain mobile-web ground for their own purposes and a range of smaller companies make big claims about their HTML5 tools, Newcomb told us, “When you look for validation points, what you look for is a major player validating you in some way. You look for what kind of team is at the startup. You look for how many developers are signing up. And then, seeing is believing, and that’s one of the reasons we made the periodic table demo our homepage.”

This major electronics manufacturer came into Famo.us’s current round with a million-dollar investment, he continued, and seeing was believing for it as well.

“They are the number one vendor for phones, tablets, PCs, and television sets, and we work across all their devices,” he said. “And you don’t get an ivestment like that unless you’ve been validated all the way up the chain.”

Of course, once you start taking bigger money, you have to start thinking about how to pay it back.

“That question I’ve struggled with ever since we decided to become a platform company,” Newcomb said. “From the beginning, we were the HTML devs we were trying to serve.”

As a result, he said, the company is trying to keep its as-yet unlaunched tools free for developers to use while “building revenue relationships with hardware manufacturers, so that the long tail customers of Famo.us simply use it as part of their development environment.

“Anytime we think about charging developers for our product, we all, like, barf.”

In addition to taking money from OEMs and other hardware partners, he hopes to be able to charge some of the bigger consumer-facing web companies with a vested interest in mobile web technologies — Facebook, Twitter, and Pinterest. “I can’t tell you how proud I would be if I got to help some of the JavaScript engineers I’ve gotten to know at those companies,” Newcomb said.

“We’re fighting for the JavaScript developers who are trying to build these damn apps, and the existing frameworks just don’t work with the browser.”