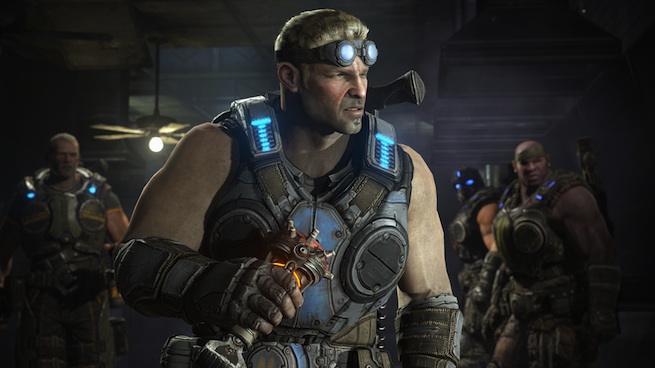 I’m tired of fighting Locusts. The subterranean monstrosities have been terrorizing the poor inhabitants of Sera for an entire console generation (almost 20 years in the planet’s fictional timeline) ever since the first Gears of War debuted in 2006. When developers Epic Games and People Can Fly announced last year that they were making a fourth blood-splattering entry in the Xbox 360-exclusive franchise, the only response I could muster was, “Why?”

That “why” turned into a more positive “hmm” after playing a few hours of Gears of War: Judgment (out March 19 for the Xbox 360) at a preview event held last week in San Francisco. This third-person shooter plays a lot like the other Gears: You still slam into cover, you still use rifles equipped with chainsaws, and you still blow up enemies into a potpourri of severed body parts.

It’s a formula that has worked well for Epic in the past, and Judgment doesn’t stray too far from it. I’m still not sure if this prequel can shake off some of that fatigue, but I found that the parts that were new did manage to reinvigorate (if only temporarily) my enthusiasm for mowing down Locusts.

Judgment’s campaign begins with a tribunal. Familiar Coalition of Ordered Governments (COG) soldiers Damon Baird and Augustus “Cole Train” Cole are under arrest (along with new faces Sophia Hendrik and Garron Paduk) for disobeying orders. The narrative bounces from one flashback to another as each member of Kilo Squad gives his personal account of the events that led up to their alleged crimes.

But that isn’t the whole story. People Can Fly separated each level into four or five digestible chunks, short sections of gameplay that you can finish in a few minutes. Each of these has a large Crimson Omen (a red cog with a skull that also serves as the series’ recognizable logo) plastered on a wall, and when you examine it, you’re given the option to play with the new declassification system. If you accept, not only will the combat become more challenging but you’ll also hear different lines of dialogue that describe what really happened during these missions — details that were normally hidden away from the public eye. 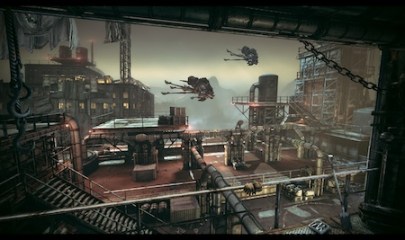 The challenges vary. While playing a newly revealed level called “Onyx Point,” I saw several different examples of the declassification missions in action. One had me run through a series of bunkers in under four minutes, and if I failed that, an off-shore missile attack would kill me. Another forced me to fight with just a heavy shield and a Lancer rifle. The next challenge introduced a strong gust of wind that made it hard to move and shoot. And one of the last sets in this stage limited my visibility by shutting off the lights and temporarily slowing down my health regeneration.

The declassify rules felt like the most refreshing gameplay change to the franchise. I never knew what I was getting into when I switched them on. I not only had to worry about the Locusts but also focus on fighting them with these seemingly random restrictions in place. It made the combat feel tense and exciting, and for a while there, I almost forgot I was facing the same Locusts from the first three games. 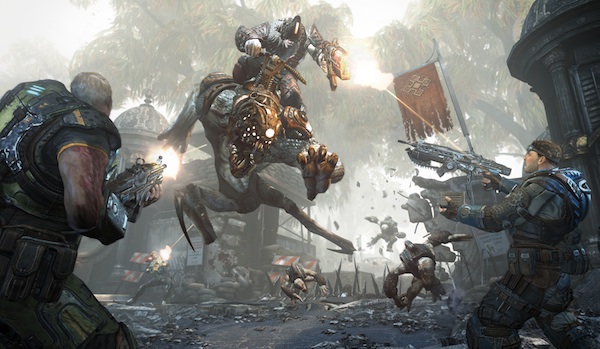 During the event, Epic also revealed Judgment’s Aftermath mode for the first time. It’s a story campaign set in the same timeline as Gears of War 3. You’re still with Baird and Cole, who reunite with Paduk after they split from fellow Delta Squad member Marcus Fenix to go on a separate mission. Think of it as like an epilogue to Judgment’s tale.

I spent around 20 minutes playing Aftermath, where I fought a large group of zombie-like creatures called Formers in the city of Halvo Bay. Except for the new control tweaks — Y to swap between your weapons and LB to toss or aim a grenade — this mode doesn’t have any of the new features from Judgment. According to Epic Games producer Alan Van Slyke, Aftermath is for fans who loved Gears of War 3 and “wanted more of it.”

The most exciting prospect about Aftermath for me, however, was getting the chance to see how Paduk has changed in the decades since his last meeting with Baird and Cole. Paduk fought on the losing side of the Pendulum Wars (Sera’s version of World of War II) and only joined Kilo Squad because it was better than wasting away in a COG prison. I could only gather small hints of his backstory — he clearly carries a chip on his shoulder and doesn’t care too much about his squadmates — but that was enough to make me think that he’s the most interesting addition to the Gears fiction in years. 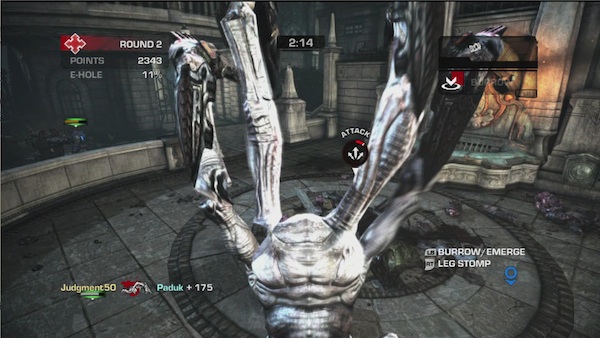 Gears of War 2 from 2008 remains as one of my most memorable gaming experiences of this generation. At the time, I was in college and living with four roommates; we had two Xbox 360s and two copies of Gears of War 2 between us. Together, we played the hell out of Horde mode (where you try to survive against waves of increasingly challenging Locusts) for weeks on end, often staying up till 4 or 5 a.m.

For one reason or another, we couldn’t capture that same feeling of camaraderie and teamwork in Gears of War 3. But I have a feeling that Judgment’s Survival and OverRun multiplayer modes may rekindle that. In Survival, you and your five-man team — made up of classes such as Soldier, Engineer, Scout, and Medic — defend key points throughout a map (with barriers, turret guns, and traps) from waves of A.I.-controlled Locusts.

OverRun works the same way except this time, you’re up against real people — both teams take turns playing as Locusts and COGs. It was exhilarating to demolish my enemies with an all-powerful swing from the gargantuan Mauler, leaving room for my allies to swarm the COG’s defenses and destroy their generator. My team had way more losses than victories that day, but when we did win, it felt good.