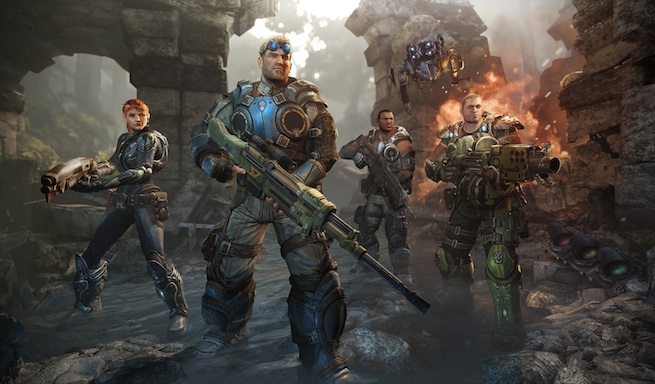 At face value, the heroes of Gears of War aren’t all that likable. No one can relate to soldiers with Hulk-like muscles, bloody chainsaws, and a penchant for catchy one-liners like “Shit, yeah!” Some circles of the Internet (including former Gears designer Cliff Bleszinski) have affectionately pegged this exaggerated masculinity as being too “dude-bro.”

The problem, I think, isn’t with the excessive violence and humor on their own, but in the way they clash against the third-person-shooter franchise’s narrative tone. Developer Epic Games attempted to add some empathy and drama — such as the search for a character’s missing wife in Gears of War 2 — over the course of the last three games, all to varying levels of success.

I brought this up during my interview with Gears of War: Judgment writers Rob Auten and Tom Bissell last week in San Francisco, where we all found ourselves taking in an unusually warm afternoon as we stood on the third-floor landing of an outdoor staircase. It was a nice change of pace from the noisy room in the floor below us, which was full of journalists and Epic Games employees curb-stomping the crap out of each other in Judgment’s multiplayer modes.

“I think Gears’ reputation for that is not entirely earned,” said Bissell. “Because the fact is, when you have four characters killing stuff in a combat scenario, certain ‘dude-bro’ emotional insinuations are inevitable. What are they supposed to do? The kiln of combat forges these relationships.”

Bissell is an award-winning and prolific writer whose work encompasses a wide range of topics. He has written books about the Vietnam War, his experience as a member of the Peace Corps in Uzbekistan, and even video games. 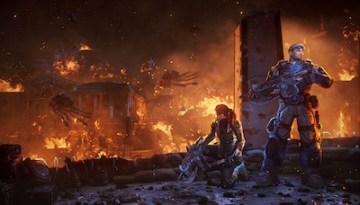 “If anything, [Gears] is not afraid to acknowledge that more openly,” said Rob Auten, Bissell’s writing partner-in-crime. “I think the ‘dude-bro’ [image] is sort of a double-edged sword: People slag Gears for being sort of emo, and they slag it for being dude-bro. It’s like, ‘Look guys, you can’t have both!”

Auten is no stranger to working with video games, either. He’s been “in or around” the industry for the last 10 years in different jobs, including being an animator and a writer.

From our short chat, it was clear that Auten and Bissell (along with Epic Games and developer People Can Fly) were out to craft a decidedly different Gears tale that would remain true to the series’ roots while injecting some much-needed nuance and personality. 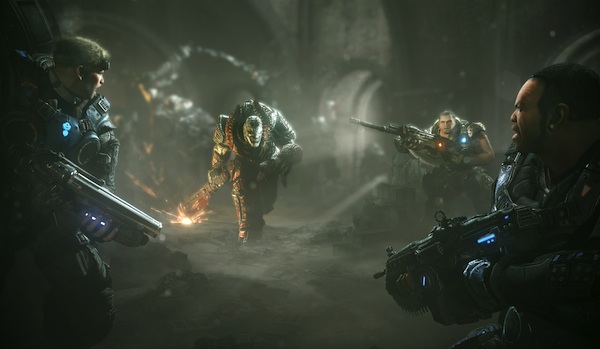 The main characters of the first three Gears of War games were Delta Squad members Marcus Fenix, Augustus “Cole Train” Cole, Damon Baird, and Dominic Santiago. Since Judgment is a prequel to the trilogy, we have a different group in the form of Kilo Squad. Included in its ranks are younger versions of Baird and Cole, as well as new faces Sofia Hendrik and Garron Paduk.

I played about an hour of Judgment’s campaign, and in that time, seeing just how different Kilo Squad was in comparison to the trilogy’s Delta Squad surprised me. They’re still efficient killing machines when it comes to fighting off the invasion of the monstrous Locusts, but their disagreements and snide comments to one another gave the impression that they’re far from being a cohesive military unit.

“And to me, [that kind of interaction] automatically creates an interesting dynamic between these four squadmates,” Bissell continued. “And so right away, when I realized these are going to be our characters, I thought, ‘Well, this is gonna be really good. This is gonna create a kind of dynamic that I don’t think has really existed in the Gears [universe] … But I think the relationships between the four people in Judgment is a little bit subtler than it is in the other games.”

“We talked to some real military people a couple of times through the process,” said Auten. “There were some people who came by Epic, and they would tell us stories of, ‘We had this one guy in our fire team and we didn’t like him very much, so we all kind of decided we weren’t going to talk to him for a year’ [Laughs]. These kind of reactions — characters, people who work closely [together] — conflict does come up in intensive situations, and we just kind of want to enable that to happen. That’s drama, right?”

Garron Paduk seemed like an interesting, if volatile, choice as a member of Kilo Squad. He fought on the wrong side of the fence during Gears’ Pendulum Wars (kind of like the universe’s version of World War II) and joined the Coalition of Ordered Governments (COG) because he thought it was better to serve his former enemy than stay in jail. He definitely fights with a chip on his shoulder, much to the dismay of the other Kilo members. 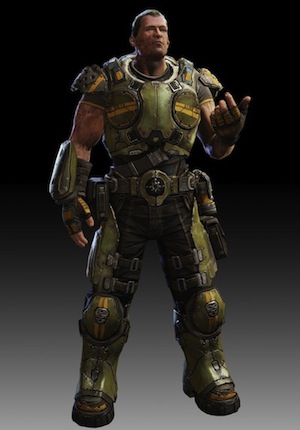 And the writers absolutely adore him.

“We’re probably Paduk’s biggest fans,” said Auten. “There have been points in the game where people have come up to us and were like, ‘Paduk is kind of a downer.’ For us, [the answer] was never ‘Yes’ or ‘No.’ We’re like, ‘Look, let’s try this. Let’s take Paduk as we know and have ambivalent feelings about him in the Judgment part of the game, and let’s throw him umpteen years into the future and imagine who he would’ve become [Editor’s note: Paduk also appears in Aftermath, a campaign that takes place in the same timeline as Gears of War 3. You unlock it after earning enough stars in Judgment’s story mode].

“He’s taken his own direction. He’s not a Stranded. He’s not a soldier. He respects soldiers but doesn’t want to be part of the military unit…. And he’s traipsing around basically the last big battle he ever fought and the place that has a lot of emotional resonance for him [as he leads] this kind of rag-tag group of stragglers. All of a sudden, all of the Paduk-ness of Paduk really came rushing back into the character, and everybody was like, ‘Okay, Paduk’s pretty good.’” 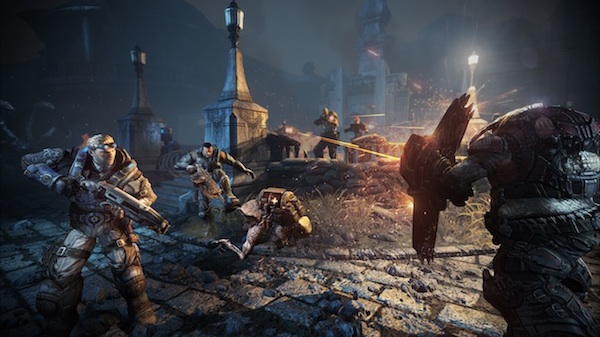 For Auten and Bissell, the hardest part about writing Judgment was the declassification missions. Judgment’s campaign mode uses a series of flashbacks to tell its story where each member of Kilo Squad gives personal accounts of the events that led up to their arrest. When you “declassify” a mission by activating large red icons in the environment, you’ll find out more information about the story (with new dialogue that reveals what really happened in each mission) than if you just ignored it.

Activating it also turns on a special set of rules and restrictions — such as using only certain weapons, finishing the level in a specific amount of time, or fighting stronger Locusts. But as fascinating as the gameplay mechanic is, the writers couldn’t find any enjoyment in trying to account for the different scenarios a player could come across with this optional system in place.

“Terrible,” Bissell said about their writing process. “I wouldn’t wish them on anyone [Laughs].”

Auten and Bissell described one memorable moment that involved some poisonous gas — the player has to complete a certain chunk of the level before a timer runs out. If you fail, the place fills up with poison gas that immediately kills you and your squad. It was the writers’ job to come up with some kind of reason to explain why this area — which also happens to serve as a sort of headquarters for COG soldiers — would have this gas mechanism in the first place.

“And then we had to do multiple versions of [the dialogue],” said Auten.

“All the narration you hear has three different versions,” explained Bissell. “So if you play through again, you’ll hear different versions of it. And so figuring out a way to ground the declassifications in a fictionally plausible way was murder. It was so hard.”

“[It was] a nightmare!” Auten said. “It was probably the hardest part of writing the whole game. Writing like 30 different lines for why you pick up an ammo container for eight different characters was easier than sometimes a single line of declassification narration.” 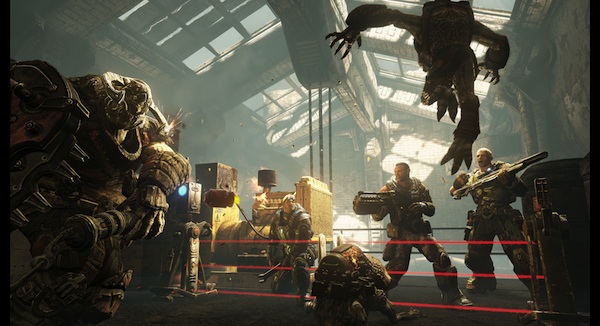 Finding room in the existing lore

Like Microsoft’s Halo or BioWare’s Mass Effect, Gears of War is one of those franchises large enough to spread out to other forms of media besides video games. Books, comics, and even toys continue the story for fans even when they’re not playing on their consoles. Judgment is in a unique position, as not only does it act as a prequel to the Gears trilogy but also as an expansion to Gears of War 3.

But despite all these existing threads covering a number of topics in Gears history, Auten and Bissell still found room to craft their story.

“We tried to identify a place in the lore where we could slot in our story,” said Bissell. “And the helpful thing from our perspective was that all the events in Judgment were later shrouded in COG secrecy — the trial was hushed up, parts of it were classified. So that was our internal justification for why no one ever talked about any of this stuff before, because it was a top secret trial where … records have been sealed.

“And that’s where the declassification [system] comes in. So there’s been some griping on Gears forums of people saying, ‘Why didn’t this ever come up before?’ Well, answer one is: Because we just thought of it … 18 months ago [Laughs]. But answer two is we actually tried to present a fictional justification.”

“At the end of the day, we wanted to make a game that was — that didn’t have to have a lot of plot exposition explaining why it was sneaking around these kind of boundaries,” said Auten. “We were hoping that even the players who have the red pens out won’t have to make too many strikes against us.”