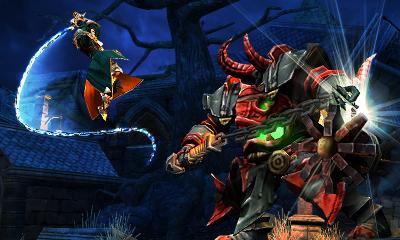 Sometimes, I like to imagine what video games would be like if God of War hadn’t been so popular. We would have far fewer hulked-out heroes smashing their way to victory while drinking precious health water from the various “fonts” scattered through the levels. These are the core things I’ve taken away from God of War, and apparently, these are also the only things Konami learned when it was developing the first Castlevania: Lords of Shadow.

Castlevania: Lords of Shadow — Mirror of Fate is a Nintendo 3DS-exclusive midstep in the re-imagined Castlevania series that ties the first game directly to the next console release. While it definitely tries to do that, it also points out the weakness in Konami’s new direction for the series. Prolonged, multistage bossfights from hell and abysmal platforming don’t rekindle my dying love for the franchise. Combine all that with 2D quick-time events and comically awful half-animated cutscenes, Mirror of Fate tarnishes the reputation of all the Castlevanias before it.

The problem is that Mirror of Fate feels like the developers really, truly wanted to make a 21st century Symphony of the Night but the clunky inclusion of the first Lords of Shadow’s gameplay simply doesn’t work. It wants to capture all the exploration and wonder of the pre-Kojima Productions games but falls short because Castlevania’s classic style doesn’t mix well with Lord of Shadow’s over-the-top design.

Dracula’s Castle
Mirror of Fate definitely wins points for returning to the old-school romp through Dracula’s carnival of terrors. Unlike Lords of Shadow, you navigate the cavernous castle by filling out a basic map that pinpoints warp points and places you should go back to. Perhaps the greatest innovation is that you can mark important locations manually to make backtracking less of a pain.

Various locations within the castle are also very distinctive, much like strolling into the library in Symphony of the Night or the bedrooms in Harmony of Dissonance. Sometimes the level transitions are subtle, but you get just enough variance that really harks back to that over-the-top design found in previous games.

Puzzles
Clever puzzle-solving is almost a different world inside Mirror of Fate. Everything slows down as you enter a massive network of moving blocks or light beams. You can zoom in on certain points to aid in finding the best solution or let your characters run around inside what looks like a giant machine. Sure, you can opt out of solving a puzzle at any point in the process, but doing that really isn’t in the spirit of Mirror of Fate. It’s worth slowing down and fiddling with electrified and magnetized blocks and burning giant puppet hands.

Quick-time events
Perhaps I’m weird for thinking monotonous button prompts ruin rather than enhance action scenes. You’ll find unnecessary quick-time events all through Mirror of Fate. Whenever you discover a chest with upgrade goodies inside you’ll furiously pound the B button until it slides open. Need to ride an elevator up a tower? More often than not, you’ll manually crank the 3DS Circle Pad around until you get to the top.

I just don’t get it. In my mind, Castlevania’s action sequences are about elegance and player skill, not this industry infatuation with making you tap a button until your finger bleeds. A lack of elegance is my major complaint about the Lords of Shadow universe. Quick-time events are not graceful, and they never will be. 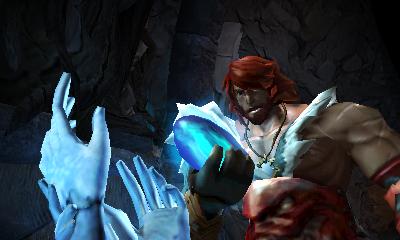 Combat
That lack of grace is a definite problem in Mirror of Fate. Perhaps it is the rocky transition from 3D to 2D, but something is amiss with how you fend off foes. No matter how conservative you are with special powers and health, you’ll often find yourself pinned in impossible situations. Enemies love to trap you in the corner of a stage and do so continuously. Bosses are the worst about this and have the added bonus of ensnaring you in perpetual animation loops that knock you back down the moment you can get your character off the ground.

The only way out of the corner, or constantly hitting the floor, is to die. And you will die a lot in Mirror of Fate. But it isn’t the sort of forehead slapping clumsy death you get in Symphony of the Night, Portrait of Ruin, or even good-ol’ original Castlevania. You feel trapped by how your character interacts with the world and the brutish way it’s animated.

Cutscenes
I don’t understand what’s happening in some of the cutscenes in Mirror of Fate. Some are well-shot in-engine sequences full of flashy combat and the occasional sultry succubus. They match the overall tone and are not that jarring. But every so often, another kind of movie appears.

Randomly, characters in Mirror of Fate fall into odd, cell-shaded sequences where they’re still talking but their characters barely move. Their mouths are largely static, so all emotion comes across in exaggerated arm flailing or permanent snarls.

It’s almost as if two different groups of animators worked on cutscenes and couldn’t agree on which was more appropriate. The change has almost no pattern to it, unless the cell-shaded effect should invoke a “mirrored” quality to some moments. But if that’s the case, I don’t understand why Simon Belmont yelling at a floating mask is much more emotionally charged than him yelling at Alucard.

Simon does a lot of yelling, so it’s difficult to get a feel for his emotional depth.

Castlevania: Mirror of Fate is thoroughly disappointing because it’s trying to marry two unwilling elements. The core experience in a 2D Castlevania (most notably Symphony of the Night, since that was clearly an influence on this game) is in direct opposition to the power-fantasy styling found in Lords of Shadow. I’ve used the word brutish in this review, and that’s really the best way to describe what Konami got out of the God of War revolution. Castlevania isn’t brutish — it is a test of your agility and your willingness to overcome nearly impossible odds. Mirror of Fate really wants to dazzle you with clever puzzles and name dropping fan-favorite characters, but it can’t emulate the soul of the series.

Castlevania:Lords of Shadow — Mirror of Fate was released March 5, 2013, for the Nintendo 3DS. The publisher provided GamesBeat with a copy of the game for the purpose of this review.