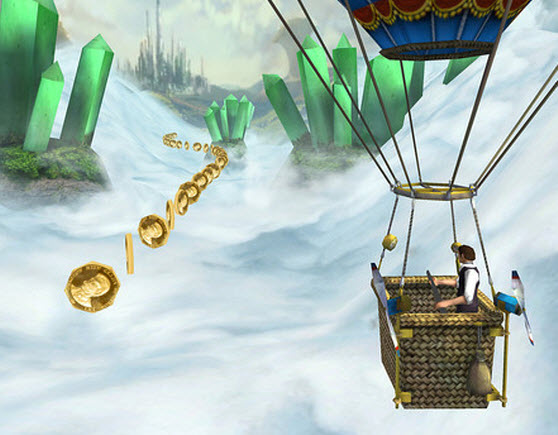 Disney is launching Temple Run: Oz today as its latest mobile game based on the hit series Temple Run. This has a lot going for it, as it has the addictive endless runner game play of Temple Run, the marketing push for the movie Oz: The Great and Powerful, and a presence on both Apple’s iOS’s and Google’s Android platforms. 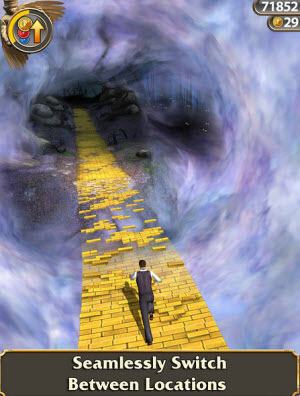 But it also has a drawback. Disney is starting to milk the Temple Run franchise, and fans might get tired of it. So far, fans can’t get enough of Temple Run from Raleigh, N.C.-based Imangi Studios, which is run by husband-and-wife team Keith Shepherd and Natalia Luckyanova. The new game is a companion to the Disney film, Oz: The Great and Powerful.

Temple Run: Oz is available for 99 cents on iOS and on Android’s Google Play store. 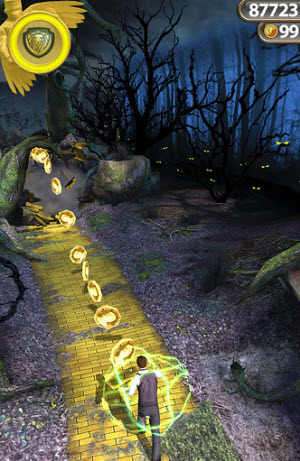 Imangi launched Temple Run in August 2011, and it became a huge hit that generated millions of downloads on iOS and Android. Your character runs down a path, and you have to swipe in different directions to enable the character to evade pursuers and other hazards. It’s a fast-action game you can play over and over as you try to beat your timed score.

Disney cut a deal with Imangi where it reskinned the game with Disney brands, such as Temple Run: Brave, based on the Pixar film Brave. That title was released in June, and it became another No. 1 hit. Such games are ideal for promoting films, since they don’t cost a lot to make and can generate a lot of awareness for the movie.

Then Imangi released Temple Run 2 in January and it generated an astounding 50 million downloads in two weeks. The title is still No. 8 on the Apple iTunes App Store in the U.S., and it is No. 32 on the highest-grossing apps list, according to AppAnnie. That showed that the Temple Run gameplay is still popular.

But it’s a risk for Disney to put out another Temple Run game when Imangi’s own title is still so high in the charts.

In Temple Run: Oz, players dash down the Yellow Brick Road through the environments of the film, which includes dynamic obstacles such as poisonous snapdragons and collapsing bridges. It has more than 100 objectives. Terrain includes the Whimsie Woods and the Dark Forest. You can ride a hot-air balloon through clouds and mountains.  And it has a new save feature where you can start a run where you left off.