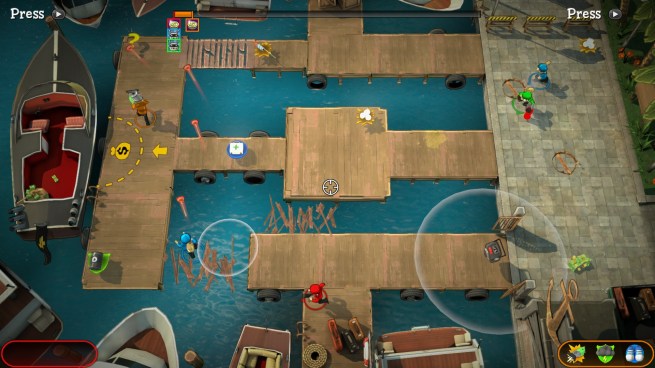 Developer Kalypso Media made a four-player online title (available for Xbox Live Arcade, PlayStation Network, and Steam) about a bunch of money-grubbing burglars who use rockets, boulders, and nuclear missiles to take out one another so that only one ends up on top with the most money.

It’s a firm concept that echoes great games like Mario Kart and Super Smash Bros., but something is lost in Dollar Dash’s execution.

In its best moments, Dollar Dash has glimmers of brilliance, but it requires a particular set of circumstances. You must have other human players who are all at about the same skill level, and the match needs to stay close until the end. In that scenario, things can get as intense as a good race in Mario Kart.

The game has three basic modes: Dollar Dash, Hit ‘n’ Run, and Save the Safe.

The titular Dollar Dash mode is the main event. It has four players chasing after bundles of cash while fighting each other off with power-ups. At set intervals, players can drop off the dollars that they’ve picked up with a van to score points.

Hit ‘n’ Run has players directly attacking one another to score cash. In Save the Safe, players can only score points if they’re holding the safe.

Dollar Dash and Hit ‘n’ Run are both OK, but too often in Save the Safe, the player in fourth place would be way behind everyone else. The other modes feature a lot more parity.

With other players who know what they’re doing, Dollar Dash and Hit ‘n’ Run have the potential for some fun matches.

A man should have a beard. Luckily, Dollar Dash gives me the chance to use  the cash I’ve burgled to upgrade my character. Some of those upgrades are cosmetic, like a voluptuous facial forest, while others provide new perks and skills.

This creates a sense of progression between matches that I appreciate. You can also upgrade to your particular play style. One of my favorite weapons is the boulder. It can roll over and decommission other players for a few seconds, but it’s easy to dodge. One of the perks increases the speed of the boulder, which plays right to my strengths.

It’s not a very deep system, and you can easily ignore it, but it helps to add a sense of continuity to multiplayer. 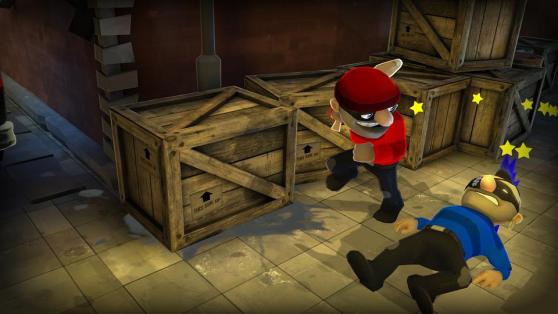 Kalpyso made a mistake with its weapon system. It’s too complex for its own good. The main issue is that weapons come in three different flavors, and they each correspond to a different button. When using an Xbox 360 controller, the right trigger activates projectile weapons, the X button activates passive abilities like speed boost, and the B button activates drop weapons like bombs.

It’s confusing to have to keep three different weapons in your head at once. You don’t have any one skill for long, so you don’t get used to anything. In the moment of your attack, it is hard to remember exactly which button lays down oil slicks.

To make matters worse, the game arranges your current items in a menu on the bottom left in an order that doesn’t correspond to the Xbox 360 controller. The X button, the left most face button, is the right most item in this menu. The right trigger is the left most icon.

This is the only game where I’ve actually had to literally look down at my controller in years.

All of that combines to make it so that most of the time, I was struggling with the controls rather than employing any kind of strategy.

My other major gripe is that everything feels like it is moving at about half speed. For a multiplayer melee action game, it’s sometimes difficult to get into that action because it’s happening on one side of the map, and you’re not going to get over there for eight excruciatingly long seconds.

Maybe I’m just super A.D.D., but my favorite power-up was the speed boost because it’s the only time that I felt the game was moving at the correct speed.

The art style is another disappointment. Not that’s bad, but it’s just wasted when you’re actually playing the game. At launch, a little video greets players that establishes an interesting world of theatrical robbers in a cartoon world.

When you’re actually playing Dollar Dash, you don’t get any of that. Instead, it’s just a generic-looking blob.

Dollar Dash isn’t great. It’s sometimes pretty OK but only after you get your head around the obtuse controls and are playing with real humans. It’s probably a bit better with people you know, but that would require your friends to all purchase the game as well. I’m not going to recommend this game to my friends, and I don’t recommend it for you and yours.

Dollar Dash debuts today on Xbox Live Arcade, PlayStation Network, and Steam. The developer provided GamesBeat with a downloadable code for the purpose of this review.