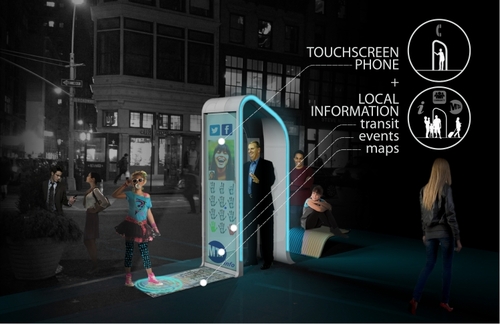 How do you remake payphones for the modern age? That was the challenge New York City Mayor Michael Bloomberg issued a few months ago with the Reinvent Payphones initiative, which was meant to crowdsource ways to upgrade the city’s 11,000 payphones.

Now the entries are in, and the city has announced the five final prototypes, ranging from a beautiful reinvention of the traditional phone booth, to a sensor-equipped unit that can record environmental conditions.

While none of these designs will actually be used to replace the city’s payphones, they will serve to inspire what NYC actually adopts. “We thought the best way to get the most energy and best solutions is to approach the folks who are going to use it,” Rahul Merchant, head of NYC’s IT department, said at the prototype unveiling last night (via WNYC).

The prototypes were judged and given awards based on the following criteria:

The city will also announce a sixth prize, “Popular Choice,” based on votes from the Reinvent Payphones Facebook page. Voting ends at 5:00 p.m. Eastern on March 14, and the winner will be announced on March 15.

The existing condition of the city-wide payphone system has created a latent opportunity to rethink the relationship between a more technologically-relevant, new payphone design and the city’s vibrant public space. The NYC Loop will serve as an access point to the latest technology while simultaneously supporting the public spaces that make NYC a unique place in which to live, visit and do business.

Frog is a powerhouse design firm, so it’s no surprise that it ended up with the best-looking design.

Gently rising out of the sidewalk and topping out at nearly 12 feet, BEACON is a slender concrete and stainless steel structure enclosing a stack of indestructible LED matrix screens, similar to those found on Times Square billboards.

More of a public information kiosk than a payphone, NYFi shows us how it may be more useful to consolidate services everyone uses today — buying metro cards, accessing information about local businesses, Wi-Fi — than replicating archaic technology.

Reinventing the Payphone is not only about a sleeker design or a digital display, it is about radically re-imagining a public amenity: how it will be used, and what it will provide.  Unlike today’s payphone, the NYFi is an interactive portal to public information, goods, and services, a hub for free wireless internet access, and an open infrastructure for future applications.

This design aims to create a data network using the city’s cellphones while also adding new functionality like paying for parking tickets and metro cards.

By updating the payphone with a modern array of sensors and displays to create a foundational input/output system for an open, urban-scale computing platform, we can allow New York City to respond to and serve the people. Through open access to real time data and a distribution platform for community, civic, arts and commercial apps and messaging, we can create a safer, more efficient, and more enjoyable city.

Another design that isn’t too constrained by the idea of a payphone, Windchimes is an interesting attempt to add more sensors throughout NYC.

Windchimes are environmental sensor stations that talk through payphones.  They can plug directly into existing technologies and communication infrastructure, making them low cost and immediately deployable. We imagined New York City’s existing 11,000 payphones as a distributed sensor network providing real-time and hyper-local records of the city’s rain levels, pollution, and other environmental conditions.

Why stop at the phone booth? Smart Sidewalks’ design is incredibly thin and extends right into the city’s sidewalks.

This proposal is driven by two competing aims: the desire to pack as much function into a single device as possible and the opposite urge: to reduce the literal and figurative footprint of the phone.