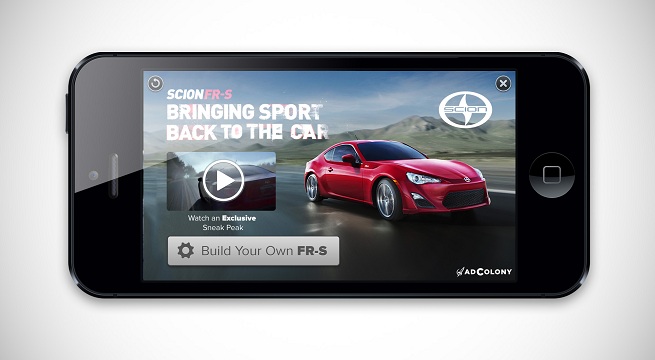 Video ads in mobile games and apps saw huge growth last year, according to AdColony, which created a platform for just such a thing. The Los Angeles startup said users watched more than a billion high-definition videos via its platform since 2011.

Privately held AdColony doesn’t disclose its revenues. But it said that it had 565 percent revenue growth in 2012, compared to 2011. And the fourth quarter of 2012 was its six consecutive quarter of record revenue. Spending on mobile video ads grew about 122 percent from 2011 to 2012, and spending on mobile ads of all kinds in the U.S. rose 180 percent over the previous year.

AdColony is one of the “5 hidden horsemen of user acquisition” and one of
the top 5 most effective mobile monetization companies, according to recent reports.

Will Kassoy, the chief executive of AdColony, told GamesBeat that the company should see a seventh quarter of record revenue in the first quarter of 2013 and that it is growing faster than the overall market. Kassoy said the growth happened because mobile users and brand advertisers have waited for a platform that delivers high-quality mobile video. AdColony focuses on delivering high-definition, instantly playable video ads, which users can view as an option in mobile games. If they watch the full ad, they get virtual coins to spend in a game. AdColony’s technology eliminates load times and buffering delays in video ad playback regardless of the connection strength.

The results are good because the ads deliver videos that users want to see, such as game or movie trailers, he said. AdColony launched in March 2011. That’s a short time ago, but AdColony is now working with Fortune 500 brands and more than half of the top-grossing publishers in the Apple iTunes App Store. The ads are viewable in 65 countries on both iOS and Android.

Kassoy said advertisers are moving away from standard ad units like banners and toward mobile video. In a survey of clients, two-thirds of advertisers said video ads were more effective for app-marketing campaigns than display ads or offer walls. And 50 percent of respondents said they plan to shift more budget to mobile video in 2013. This year, Kassoy said companies are focused on video ads for monetization and user acquisition.