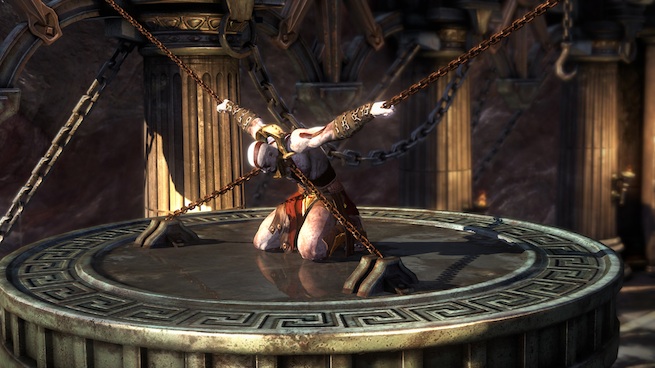 [Apologies for the review being a little late. Due to some technical problems, Giancarlo had trouble connecting to Sony’s prerelease online sessions for God of War: Ascension’s multiplayer modes. We didn’t want to publish the review until Giancarlo was able to spend more time with multiplayer, which he did earlier today. Of course, keep in mind that the issues he experienced is in no way indicative of what the servers will be like when the games comes out. We also know that other reviewers fared better than Giancarlo did. So your experience may vary. — Ed.]

Every inch of Kratos pulsates with power. He can cut down his foes effortlessly with his twin Blades of Chaos. He can tear off the wings of a harpy using just his bare hands. But when Ascension begins, you won’t find the former Spartan general celebrating a moment of victory — you’ll see him chained up like an animal, tortured by his captors. He looks defeated. His body is weak.

Sony Santa Monica has emphasized the humanization of Kratos in God of War: Ascension (out Tuesday exclusively for the PlayStation 3). In previous God of War games, Kratos was a revenge-spewing machine, racing across the ancient Greek world at 1,000 miles per hour until he satiated his blood lust. And he’s not all that different in this prequel — chronologically the first game in the series — as he still obliterates an army of mythological creatures in brutal and violent ways.

But to the developers’ credit, we do see a side of Kratos that’s never been shown before. He’s self-reflective, haunted by visions of a past he doesn’t understand, and he’s also (dare I say it) vulnerable. So vulnerable, in fact, that he doesn’t even engage in any tongue-in-cheek sex minigames, which has been in every other God of War so far.

That alone should tell you that Ascension is a slightly different beast from the rest of its ilk. It preserves the hack-n-slash spectacle from the games before it, but it also adds cinematic tweaks that make you forget that what you’re seeing is running on a nearly 7-year-old console. 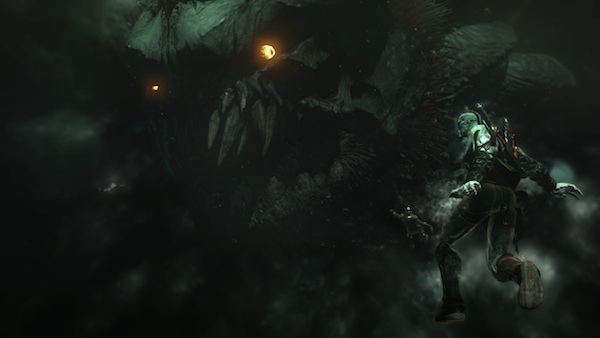 God of War’s most distinguishing characteristic has always been its sense of scale, with Kratos fighting legendary monsters who can seem as large as entire cities. Ascension wastes no time in getting to the good stuff: Within the first hour, I was fighting the hundred-arm Hecatonchires, a menacing giant whose body served as the foundation for a prison. This is the domain of Ascension’s three main villains, the Furies (sisters who act as judge, jury, and executioner for anyone who betrays a blood-oath to the gods).

While I fought a bunch of smaller enemies on a constantly moving platform, the Hecatonchires kept trying to swallow us with his disgusting maw filled with sharp fangs and spider-like legs — Kratos and company looked like mere ants in comparison. Despite the word’s overuse, “awesome” is the only description I can think of that aptly fits the sensation of seeing these set pieces in motion.

It doesn’t hurt that Ascension has a near-flawless visual presentation. Aside from odd quirks (like pixelated birds flying next to an otherwise beautiful backdrop of the ocean), God of War: Ascension is one of the best looking PS3 games I’ve ever seen. It particularly works well with the over-the-top violence. I almost had to turn away from the TV after seeing the gruesome animations play out many times: brains popping out of elephant men’s skulls after Kratos cuts them wide open, the way that two bloody halves of what was once a gorgon just hang in the air after he executes it, and how the cyclops desperately clings to life even as its entrails spill out of its stomach.

With the PS3 nearing the end of its console cycle, my mind kept wandering back to the PlayStation 2 release of God of War 2, which came out in 2007 (only a few months after the PS3 launch). It was the last major triple-A release for the then-6-year-old hardware, and in terms of visual fidelity, it was the best the PS2 would ever get. I believe the same could be said for God of War: Ascension.

Even if you don’t have any interest in playing it, I highly recommend hunting down someone who does and watch them play Ascension on a huge TV. Seeing videos of it online on a computer screen does not do it justice.

The graphics aren’t the only reason the violence can seem so real and disgusting. It’s also because of how Ascension stylishly frames the action with its virtual cameras — they zoom in close when Kratos is about to deliver a finishing blow and pans out when he’s fighting screen-filling creatures like the Hecatonchires. It’s one smooth transition after another, and they rarely obscure your vision or get stuck at weird angles. Some cuts from one camera to the next can seem disorienting, especially during Ascension’s less-than-stellar platforming segments. But for the most part, you can trust it.

They even make the choreographed button-prompt kills — which have become less intrusive now that they show up on the sides of your screen and not in the middle of it — appear exciting again. But if you’re not a fan of that, the developers also made sure to leave room for some creativity: When you grapple against certain weakened monsters, the fight switches to an Infinity Blade-style 1-on-1 scenario, with the camera sitting just a little behind Kratos’ shoulders. You can dodge left or right to avoid attacks and use your light and heavy moves to finish the job.

It’s an intimate approach to combat that makes you feel like you’re right next to Kratos as the blood and guts fly from his helpless opponents. Make sure you eat something before you start playing. 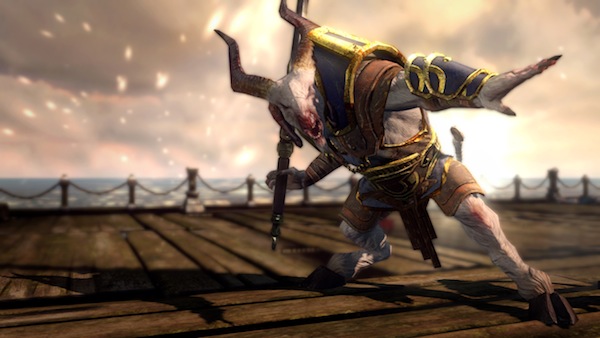 Multiplayer is a fun mix of traditional modes and God of War’s combo-driven fighting system. Though you don’t play as Kratos, the nameless warrior you’ll end up customizing has similar moves and powers, the details of which vary depending on the god you align yourself with (Ares, Zeus, Hades, or Poseidon).

You can’t just mash buttons and hope to win. You need to pay attention when your opponents are open for grabs, when it’s the right time to use your quick attacks over your heavy attacks, and how long it takes for your special moves to cool down. The result is kind of like a skill-based version of rock-paper-scissors. Once you figure out how it works, it feels satisfying to put someone up against the proverbial ropes as you take him out with one devastating combo after another.

And it’s not just about killing other players. The maps usually have their own objectives to distract you from improving your kill-death ratio. In the Forum of Hercules, the famous demigod will spawn monsters that attack everyone and you can earn extra “favors,” or points, for defeating them. In the city of Troy, you can help fend off the Greek invasion by manning a large catapult. And in a level ripped straight out of the film 300, you can kick people down into a deep well for the ultimate humiliation.