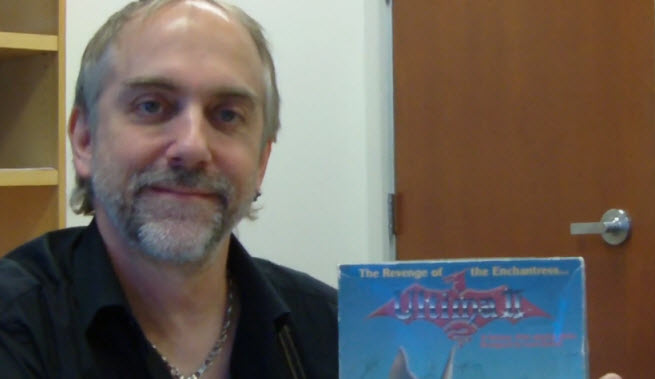 Richard Garriott, chief executive of Portalarium and known under the handle Lord British, announced his first new fantasy role-playing game in 15 years today. His Shroud of the Avatar: Forsaken Virtues is the spiritual successor of the Ultima series, and Garriott explained why that is the case in an interview with GamesBeat.

Garriott is one of the craftsmen of the video game business, and he shows how he designs games in our video interview. His fantasy role-playing universe of Ultima had its origins as a Dungeons & Dragons paper-based story from his high school years. Garriott’s first game was Akalabeth: World of Doom, a predecessor to the Ultima series on the Apple II computer. He sold in plastic bags in stores for $19 to $35. The game sold 30,000 units and Garriott made $150,000 from it. His father, who was an astronaut for NASA, was making less than half that in a year.

Garriott was still in high school at this time.

Ultima I: The First Age of Darkness, was published as a computer game in 1981. In that title, the Stranger is summoned to Sosaria to defeat the evil wizard Mondain. The series turned out to be one of the biggest in gaming history, with millions of units sold and a dozen or so titles published. In 1983, Garriott founded his company, Origin Systems, based on the revenues from Ultima and sold it to Electronic Arts in 1992. EA still owns the rights to the Ultima name.

So when he went about creating Shroud of the Avatar: Forsaken Virtues, he returned to his old style of game design. He wrote a narrative as well as a backstory, with things like the locations of magic items and hex-based maps that captured everything in the land. He kept expanding the size of the maps until (at 96-by-96 hexes) they reflected the proper distances in the computer world, and then he turned it over to his artists, who turned it into a beautiful overlay for the new world. The first episode of the new game is just one map of a bunch that Garriott and his team will introduce over time.

When Garriott created the Ultima universe, he didn’t just write the story. He also wrote all of the details in the backstory and the chronology of the world. He wrote about the locations of magic items and other things that could help him keep track of everything in his notebook. He did that after studying J.R.R. Tolkien’s The Lord of the Rings and the way that Tolkien created a huge backstory (chronicled in later books like The Silmarillion, which used the word ‘Akallabêth’ ), complete with languages and history. That is still the way Garriott creates his games today.

In fact, Garriott is launching a Kickstarter campaign for the new game today and he will give away cloth maps to those who donate additional money for the crowdfunding effort. The cloth maps are not unlike those he included in Ultima II: the Revenge of the Enchantress, which was published in a nice box (pictured) by Sierra in 1982.

Here’s the first of two video interviews we did with Garriott.

Richard Garriott shows how he went from Ultima to his ultimate RPG from VentureBeat on Vimeo.