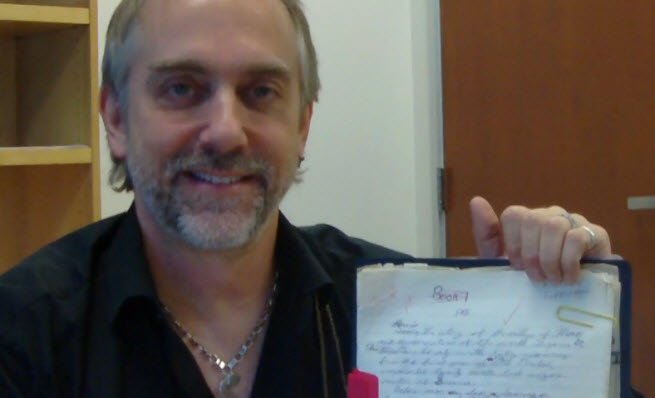 The giant fantasy role-playing universe of Ultima had humble beginnings. Richard Garriott, the head of Portalarium game studio, created the first elements of that universe when he was a kid in the 1970s.

He was one of the first adopters of the paper-and-pencil Dungeons & Dragons game, and he started creating campaigns. One of the stories he wrote was about “Lord British.” In high school, he was a poor student in English class, but one of his rare A’s was a story that told the story of one of his D&D dungeons. Garriott still has a copy of that story, which mentions the evil wizard Lord Mondain, the land of Sosaria, the Village of the Moon, and Lord British, which became Garriott’s own alias in computer games.

“Years before I had a computer, I was writing Ultima,” he said.

Garriott’s first game was Akalabeth: World of Doom, a predecessor to the Ultima series for the Apple II computer. He sold it in plastic bags in stores for $19 to $35. The game sold 30,000 copies, and Garriott made $150,000 from it. His father, who was an astronaut for NASA, was making less than half that in a year.

Garriott was still in high school.

Ultima I: The First Age of Darkness was published as a computer game in 1981. In the first Ultima, the Stranger is summoned to Sosaria to defeat the evil wizard Mondain. The series turned out to be one of the biggest in gaming history, with millions of units sold, nine games in the main Ultima line, spinoffs such as Ultima: Underworld, and Ultima Online. In 1983, Garriott founded his company, Origin Systems, based on the revenues from Ultima and sold it to Electronic Arts in 2004. EA still owns the rights to the Ultima name.

When Garriott created the Ultima universe, he didn’t just write the story. He also wrote all of the details in the backstory and the chronology of the world. He wrote about the locations of magic items and other things that could help him keep track of everything in his notebook. He did that after studying J.R.R. Tolkien’s The Lord of the Rings and the way that Tolkien created a huge backstory (chronicled in later books like The Silmarillion, which used the word Akallabêth), complete with languages and history. That is still the way Garriott creates his games today.

Here’s the video interview with Garriott, who is working on a new role-playing game series for the first time in 15 years:

Richard Garriott shows us how Lord British got his start from VentureBeat on Vimeo.