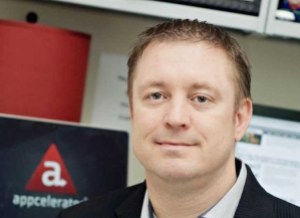 In a filing today, the company revealed it’s sold around $5 million of a planned $16 million in shares to a range of investors.

Reps from the company told us the round wasn’t yet closed (obviously), but we’ll be first to know when the deal is officially sealed.

Mayfield, TransLink, Sierra, and Storm are listed on Appcelerator’s site as existing investors.

The company has been raking in the proverbial dough quite a bit this year, posting a $16 million round in February and an upcoming $3 million raise for April. So far, it’s mostly a spaghetti-like mound of regulatory filings; what we’re likely to see in the next month or so is the company’s formal Series D announcement.

Appcelerator’s $15 million Series C closed in November 2011. At that time, it also announced it had become the largest third-party app publisher for both iOS and Android mobile platforms.